A Wake-Up Call for The Muslims 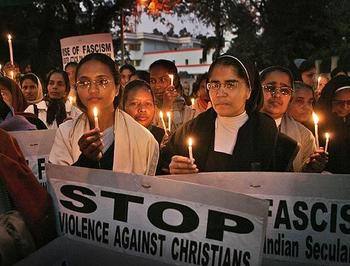 It is the most common feeling in the western Christian world that the Muslims are a grave threat to the supremacy and hegemony of the countries like US, Israel and India; so they must be crushed with an iron hand. Ridiculing the Muslims, victimizing the followers of Islam and targeting their holy places; all these actions are a part of an organized anti-Muslim campaign. Innocent Muslims all over the world are now-a-days protesting against the blasphemous film, Innocence of Muslims, but they don’t know that all their protest would go waste because everywhere they are ranked as losers and beggars. Their miserable economic condition, their poor performance in the field of science and technology and their every day increasing intolerance for their own brothers is simply undermining them as a nation and community.

The western Christian extremists in collaboration with the Jews and the Hindus are doing all their possible to exploit this sorry plight of the Muslims. It is no doubt the real innocence of Muslims that till now they have not recognized their actual enemy, they are always eagerly waiting for a friendly hand from America. Unless the Muslims come out of their baseless and illogical world of imagination tinged with their self-created colours of friendship with US, things could never go in their favour. Today the most important thing the Muslims need is unity and unfortunately this is the only thing we the Muslims are lacking badly. Every year hundreds of innocent people are deprived of their lives in the name of sectarian violence. A few months back The Guardian UK commented upon the increasing sectarian violence in these words; “Sectarian attacks are not new in Pakistan, but there has been an upsurge, especially in Baluchistan since at least 2010, in the Kurram and Orakzai tribal agencies bordering Afghanistan, the port city of Karachi and across the Punjab. Now the frosty, picturesque mountain ranges of Gilgit-Biltistan, on the northern border with China, are seeing an increasingly violent sectarian conflict.”

The most important thing in the present hard time for the Muslims is to realize that this brutal world does not accept the sectarian divide of the Muslims; from US and Israel to India, no one knows who are the Shias, Sunnis, Barailviz or the Deobandiz; they know one thing that they are to crush everyone who claims to be a Muslim. They are simply fighting against Islam and the Muslims. To crush the enemies of Islam, we all will have to join hands together; that is the only way we are left with.

The so-called war against terror has stealthily changed into the war against the Muslims in a very technically and artistically designed manner and the Muslims all over the world have turned a blind eye to this day light reality. The Muslims are being pushed to wall but they are simply busy in issuing fatwas against one another. I still remember the photograph published a few years back in various newspapers showing some American soldiers shooting mercilessly at three Muslims who were taking refuge in a mosque in Iraq. I am sure the American soldiers might not have asked them before killing which sect of Muslims they belonged to. In the eyes of the anti-Islam forces, neither we are Shia nor Sunni, Deobandi nor Barailvi; we are nothing but the Muslims. Unless we realize this fact, things would ever remain the same. In the larger interest of the Muslim community it is the responsibility of our religious leaders, scholars and philosophers and above all of those who are working as Imams in different mosques to make their followers realize that sectarianism would do nothing but shatter the very foundations of the whole of Islamic society. They must try to make their followers understand that Muslims belonging to different sects believe in one God, one Prophet (PBUH) and one Holy Quran. They have always been living an exemplary life of complete harmony based on tolerance, mutual respect and reverence which are the basic ingredients of the message of Islam.

It is the need of time that the religious leaders of the Muslim community all over the world must come forward and educate the people that sectarianism is a cancer which undermines the whole structure of a social body within no time. The western societies are so intelligent that they never let their sectarian differences hinder their way to progress and prosperity because they are very well aware of the fact that sectarian conflicts leading to extremism simply mar the peace and prosperity of a society. The Muslims must learn a lesson from today’s western society. Extremism, sectarianism and militancy give nothing to a society but destruction, deterioration and decline. For the peaceful nourishment of our society we need to keep a vigilant eye on the elements which are giving air to the baseless and trivial differences among Muslim sects; we must not forget that unity is the basic lesson of Islam. By ignoring this basic lesson we are digging our own graves.