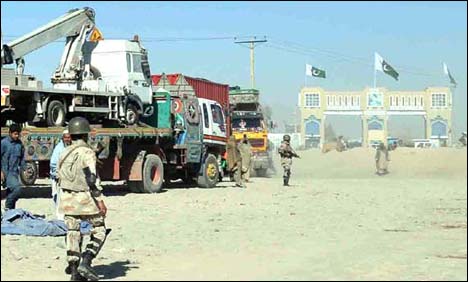 CHAMAN: The first truck carrying supplies to American and NATO troops in Afghanistan has crossed the Pakistani border after a seven-month closure of the supply routes by Pakistan ended earlier this week. The reopening is a rare bright spot in relations between the US  and Pakistan, which had closed the routes in retaliation for American airstrikes in November that killed 24 Pakistani border troops. Disagreements over issues like American drone strikes and Islamabad’s alleged support for Taleban  militants still hamper a relationship vital to stabilizing neighboring Afghanistan.

During the closure, the US  was forced to use more costly and lengthy routes through the former Soviet Union. After months of back-and-forth negotiation, Pakistan reopened the routes on Tuesday after Secretary of State Hillary Clinton apologized for the border deaths. A paramilitary official at the Chaman border crossing, Fazal Bari, said the first truck moved across the border around noon local time yesterday. Five hours later, no other trucks had passed.

The Chaman border crossing in the province of Balochistan is one of two used by trucks carrying supplies to Afghanistan. The
other, known as the Torkham crossing, is further north in the Khyber Pass, a high mountainous area far from waiting shipments. No crossing was expected there yesterday.

Prime Minister Raja Pervaiz Ashraf said the deadlock over the supply line closure had threatened to hurt Pakistan’s relations with NATO member countries. In a statement yesterday he said Pakistan wants to facilitate the drawdown of NATO forces in Afghanistan in order to promote peace and stability there. The prime minister said Pakistan made it clear that its red-lines should be respected.  Pakistan and the US  differed over how much the US  should pay Pakistan to transit trucks through its territory, as well as Pakistani demands that the US  apologize for the deadly November airstrikes. In the end they appeared to compromise with the US  issuing an apology but paying no extra transit fees than the $250 per truck that it was previously paying.

In the port city of Karachi, truckers were preparing for the trip. Thousands of trucks and tankers have been stuck at ports in Karachi waiting for the transit ban to be lifted as diplomatic wrangling dragged on. “Today almost after eight months NATO supply has been started. I am taking NATO cargo to Peshawar where this cargo will be shifted to trailers taking the same to Kabul,” said driver Javed Iqbal.

The chairman of Port Qasim, Mohammad Shafi, said yesterday that more than 2,500 NATO containers and vehicles have been held at the facility since the blockade began. Getting them back on the road will take time, Shafi said, due to paperwork and customs clearance procedures. “Once we do that, we will be able to let the supplies leave for Afghanistan,” he said. The journey is a perilous one, as the Taleban  and other militant groups have threatened to  attack supply vehicles in Pakistani territory. Before the closure, hundreds of supply trucks, which travel in convoys, were targeted in different areas of the country.

US  officials had expected the first trucks carrying NATO supplies to begin crossing into Afghanistan on Wednesday, but bureaucratic delays held that up. The reopening could save the US  hundreds of millions of dollars, since Pakistan’s blockade forced Washington to rely more heavily on a longer, costlier route that leads into Afghanistan through Central Asia. Pakistan is also expected to gain financially, since the US  intends to free up $1.1 billion in military aid that has been frozen for the past year.
But the deal carries risks for both governments. Pakistan is already facing domestic backlash, given rampant anti-American sentiment in the country and the government’s failure to force the US  to stop drone strikes targeting militants and accede to other demands made by parliament. President Barack Obama, in the midst of a re-election battle, faces criticism from Republicans who are angry his administration apologized to a country allegedly giving safe haven to militants attacking American troops in Afghanistan.