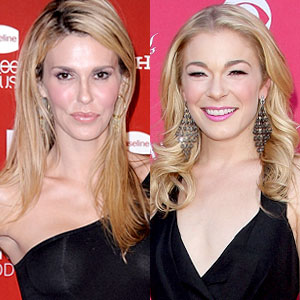 Brandi Glanville unleashed her Twitter fury on LeAnn Rimes Saturday (in a not-so-subtle way) after the country crooner tweeted she was heading out of town with “her boys,” as in Glanville’s two sons with ex-hubby Eddie Cibrian.

“Flying out with my boys in a few hrs. Love that it’s a family tour weekend. It’s always more fun when they are with me,” Rimes tweeted Friday.

“Someone is trying 2 get under my skin by calling MY children “her boys” Sooo transparent! They R MY boys, Eddie Boys and ur step-sons… 4 now,” Glanville tweeted Saturday, obviously referring to Rimes tweet.

While Rimes didn’t retaliate directly, she went on to post photos of Cibrian and the two boys on her page and made several references to being a stepmom in a few retweets.

“‪@leannrimes Being a step mom is such a hard role to play….but only the strongest women can handle it !,” Rimes retweeted for example.