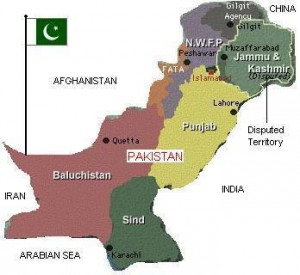 Some leaders have violently announced that new provinces be created by breaking the existing provinces. A few months back, the Prime Minister was loud and clear to articulate that South Punjab would be created as a new province. Come what may!
The irony of fate is such that our existing “Constitution of Pakistan” is being violated openly. The very first Article of the Constitution reads that there will be only four Provinces i.e. the Province of Baluchistan, NWFP, the Punjab and Sind. To disturb the number of the Provinces is not a play – game otherwise rest of the Book will become vulnerable to every wishful conjecture of the ruling myth.

We must remember that Pakistan was created in 1947 out of the body of Bharat, its resolve was to destroy Pakistan as soon as possible. In 1971, the Indian Army attacked E. Pakistan and cut us into two pieces. Now, after 9 / 11 Event, India continues to carry out surreptitious hostile activities. Now , our rulers are after breaking the most important province- The Punjab. PPP has declared that Southern Punjab will be made a separate province as it is a part of its manifesto. There is yet another voice that erstwhile Bahawalpur State be converted into another new province. Pakistan is being broken in  the hands of those political parties who were not a part of Quaid – e- Azam Jinnah’s Pakistan in 1947.

The greatness of the Punjab has been illustrated by one Robert D. Kaplan who has however characterized about the perversity of Pakistan at the present moment.
According to him, Pakistan is a military state which for decades invested in the conflicts with India but  now is a civilian elite who pays almost no taxes; it produces much lesser electricity for use; has non existing education system but has an overbearing military presence. He says that there was much history and geography behind the drive of Jinnah to create a separate Muslim state anchored in the sub-continents, though it is now in trouble and is at stake.

The process of Muslim conquests began in Sind, in the desert tracts, Iran and Afghanistan and also in the vicinity of Mid East. The Muslim rule was established in the Indian sub- continent from the Eleventh Century till the arrival of British traders in the Eighteenth Century. The history swelled with Muslim conquests; brought new culture in the region ; introduced a Muslim civilization which is now in shape of Pakistan.

A historian of University of Chicago , Muzaffar Alam writes admirably that this area of Pakistan has been for centuries a table- land of Central Asia alongwith the gift of cultivation for the entire Indian Sub-Continent. All the kings and raiders from the world came through after touching  the slopes of Afghans Hills before reaching the five rivers of the Punjab. They often settled down in the Indus valley or in around Delhi where culture grew and progressed. Punjab which has been given by the Persian language – Punj (five) and Aab (water) when joins become the great Province named Punjab. Before partition of 1947, two big provinces of combined India were divided into two pieces the Punjab (between Muslims and Hindu / Sikhs) and the Bengal (between Muslims and Hindu in the East).

It is a pity that Punjab is again being broken not in further twos but in many pieces. Pakistan’s Punjab is bigger than all other provinces in population. The soldiers of the Punjab are the best fighters. They displayed their worth in the two World Wars, for the British Army. Most of the Victoria Crosses and the only one George Cross have gone to Punjabi Muslims.

Similarly, the percentage of Nishan-e-Haider in Indo – Pak wars awarded to the Punjabi soldiers has been very high. Punjab is perceived to have accounted for about 80 percent of Pakistan Army and more than half of Federal bureaucracy, as per the “Foreign Policy- July – August 2012”. It says that Punjab is like an internal power ruling Pakistan in the way that Serbia and the Serbian army ran Yugoslavia in its prime rule, prior to that country’s civil war.

Another well -known Muslim historian has written, “If the motherland of five rivers (The Punjab) had not been obtained, then it would have been impossible to establish Pakistan”. The Punjab is the citadel for the existence of Pakistan. To break Punjab into pieces is the last strategy of India. It is closing to reach near to its implementation through our internal forces – it may be a grand conspiracy to break Pakistan, ultimately.