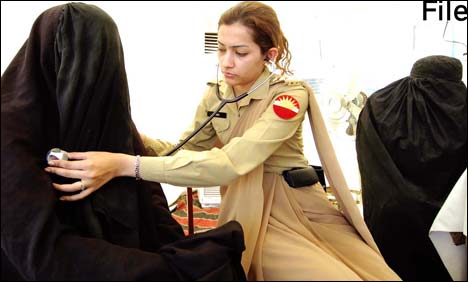 The Doctors are on strike for the past 36 days in Balochistan and the province ably led by Aslam Raisani, the CM, instead of responding to their demands ordered jailing the Doctors. After a scuffle with the Police, which otherwise fails in its core duties, doctors were stuffed into prison vans and put in jail, all 65 young doctors in Quetta. The Lawyers probably thanked Almighty, and perhaps the CM also, and went about getting the bails. The Judges, busy as they are, are taking their time but allegedly in 24 hours all the Young Doctors were out.

The cause of the doctors strike?

During the last over a year, some 35 doctors have been killed for not paying ransom, and at least one was killed even after his family paid Rs. 65 lacs after selling property and borrowing. 60 doctors have been kidnapped. 5 are still in custody of criminals. The doctors accuse, Siraj Raisani, brother of CM, PPP President, MPA and a minister Sadiq Umrani, Zafar Zehri, MPA, Home Minister, Shafiq Mengal, son of Federal Minister Nasir Mengal, DIG Police CCPO Zubair and an assorted handful of Nur Zais, recent arrivals from Afghanistan. The doctors have been demanding raids on houses where their  kidnapped colleagues are being kept, but the CM and Police dont oblige. Basically, doctors are demanding security to life which the CM finds not worth providing or incabale of ensuring!………..Hence the strike.

The strike is taking its toll. The normal patients and those wounded by Baloch/Brahui terror acts are also suffering. In Balochistan, Quetta is the only city, established by the British in 1878 and then greatly expanded after Pakistan came into being, which has any medical support worth the name. The rest of the province has BHUs and some hospitals but without doctors and medicines. For instance, there is an impressive (so far as building goes) hospital in Ziarat and 36 doctors posted but only 2 show up that too  in turn. And Ziarat is only 75 miles away from Quetta. The remote towns have no doctors present.

On 20 Nov 2012, Army decided to extend medical help in response to the request of the CM. Not only Army Doctors started working in civil hospitals, but the Combined Military Hospital (CMH) started a special Emergency Cell which has been giving medical support to the neglected patients. Within 24 hours, over a 100 patients were admitted and 1000 treated within CMH, free of cost.

This great service is being rendered while attacks on army, FC personals are being carried out. On 21 Nov, a school bus carrying children of army personnel was attacked by an IED activated through remote control. The pickup truck carrying the army guards in front of the school-bus suffered the full blast while the bus which was barely 20 yards away escaped it. Five, including 3 soldiers were killed, 28 wounded while the children , shaken and shocked for sure, remained safe.

The Army doctors, some whose children were attacked, are treating round the clock all patients in CMH irrespective of their racial/ethnic background. However, this great sacrifice, dedication and patriotic duty of Army doctors being performed round the clock without rest, is neither reported by Pakistani media, nor the egoistic-anchors consider it worth the debate………Or is it that the paymasters don’t consider it fit for reporting in their scheme of things?

The doctors strike? That goes till the CM provides protection. Even the CJ has not yet taken suo-motto notice.

The writer is based in Quetta.