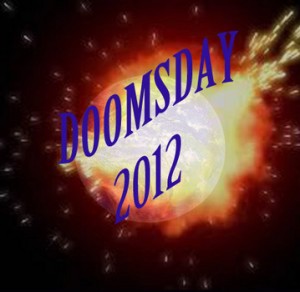 The last day of the Mayan calendar predicted that the world would come to an end on December 21, 2012. On this date planets including the sun and the Earth will align. The apocalypse lobby believes that the alignment would disturb magnetic field and navigation systems, causing earthquakes and volcanic eruptions. The skeptics treat the Doomsday prediction as plain nonsense. The Doomsday scenario was imbibed in impressionable minds by Neville Shut in his novel “On the beach”, the Terminator-series movies, and some religious teachings.

The Maya was a great civilization. They understood the zero concept and used it in everyday calculations. Without comprehending the zero, it is not possible to comprehend infinity. The Maya year included 365 days with corrections for leap year. They watched stars to predict eclipses and angled their ceremonial houses to face the sunshine at particular times (Feng Shui). They cultivated foodstuffs such as maize, beans, squash, cacao and avocados along with harvested from sapodilla trees to make glue, and latex from rubber trees to make balls for ceremonial games.

Studying ancient civilizations has great merit. We could judge whether our own civilization is on an ascendant or a decadent path. The current trend is not to pinpoint to a single event as the pivot that brought about downfall of a civilization. Civilizations are viewed as a fluid process with pre-classic, classic and post classic period. The status of a civilization in a certain period gives clues to its benevolent or malevolent trends.

Thus atrophy of the Mayan civilization, too, is not traced to a single event. We could learn a lot from the Mayan civilization, why and how it vanished. It collapsed because of cumulative effect of several factors. The Maya had a myopic leadership. They lacked the ability to think beyond their own immediate interests. They did not have a national perspective and a strategy to meet current and future challenges. In one word, complacency was the hallmark of their policies. They thought that their world would continue hunky-dory for centuries until it inevitable ends one day, too far. Of course, they survived for around five centuries.
Like us the Mayan leaders could not tell a friend from a foe (Do we?). Their neighbouring ruler, ‘Spear-thrower owl’ dispatched his goodwill ambassador named ‘Fire is born’ to the Maya. The ambassador’s mission was to win over the Maya by persuasion, or by force, if necessary. In simple words, he wanted to include the Maya within his country’s orbit of influence (Henry Kissinger’s ‘sphere of influence’ or Chanakya’s mandal).

Like the Americans, he laid his information network in the Mayan empire to stay abreast of the Mayan fortes and foibles (Condoleeza Rice so glibly and gleefully said that Osama was hit because of the information network that Bush administration had laid in Pakistan). The Mayans were so gullible that they treated the ambassador’s precious gifts and grants as a free meal. They miserably failed to read his mind. Do we also understand that the American aid is no free meal? Why the Americans are not so generous to their own next-door Mexico? (Because Mexico is not the only Muslim country with nuclear weapons).

What was in the ambassador’s mind? The ambassador had planned to attack the Mayan empire from staging point of a nearby port. The Maya were unaware of the large flotilla of canoes, being built by their neighbour. Their enemies had better strategy and technology (like our enemies have).

The Maya lacked foresight to assess their economic and military challenges. They lacked what Ibn-e-Khaldun calls asabiya (national cohesion) to meet external challenges. Khaldun says without asabiya, beleaguered nations fail to fight challenges. The Maya failed to notice that their limited economic resources were too meager to meet basic needs of their population (around one lac). They were a rain-dependent civilization. Unexpectedly, drought and epidemics (smallpox) wreaked havoc with their burgeoning population. They did not have the engineering skill or common sense to build dams on rivers or catchment areas (we have skills but no common sense).

Extravagance, nepotism, injustice, and financial and polygamous corruption exacerbated their economic woes. They could not have a macro view of their polity and economy. We have a government, a planning commission and several ministries.
Aside from political wrangling, do our institutions make an effort to deliver the goods? In a YouTube speech, Hitler says that his country is encircled all around. It can neither sell nor buy goods for its people. Yet, he assured, that with one weapon in his custody, he would overcome all problems. The weapon was planning.
The prevalence of injustice and other evils weakened the Mayan politico-economic system. Palace became hub of royal intrigues. The immoral character of their rulers shattered common man’s belief about divinity and invincibility of the king. National cohesiveness evaporated and the society became fragmented.

Frequent wars, including a fratricidal one, and over-taxation could not balance their profligate budget. Had they been victorious in battlefields, they could have made up for their budgetary deficits through the tributes paid by vanquished enemies. But, the prolonged wars led to a stalemate. The resulting cold-war dried up finances.
Let’s hope that we have a better sense of history. Pray that history does not repeat in our case. Let’s not fear death, but extinction. Each day around 1, 50, 000 people die.