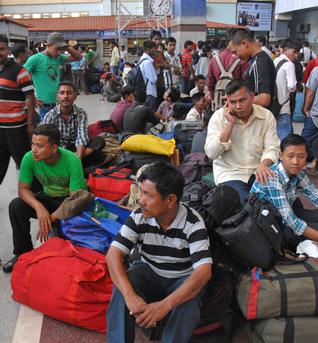 BANGALORE, India — Thousands of panic-stricken Indians from the northeast were fleeing the southern city of Bangalore on Thursday, spurred by rumors they would be attacked in retaliation for communal violence in their home state.

Hundreds of students and workers from Assam state crowded Bangalore’s main railway station to try to board trains heading out of the city, while officials tried in vain to assure them of their safety. People pushed and shoved and some climbed in through train windows to make it past the crush at the doors.

The exodus followed clashes in Assam in recent weeks between members of the indigenous Bodo tribe and Muslims that killed more than 50 people and left 400,000 in displacement camps. The violence has spilled to other states where Bodos and other ethnic tribe members from the poor northeast have migrated in search of jobs.

Those fleeing Bangalore said they had heard text messages had been circulating threatening attacks by Muslims.

Jagadish Shettar, chief minister of Karnataka state, met separately with Assamese and Muslim leaders Thursday in an effort to restore calm. Bangalore is the capital of Karnataka.

Shettar said no one had seen any threatening text messages and authorities were trying to find out who was behind the rumors. He said police and security forces were on alert and telephone helplines had been set up to give a sense of security to people in the city.

Despite Shettar’s assurances, many from the northeast said they felt insecure.

“As a person from the northeast, we always stick out in a crowd. And sometimes that makes us afraid of being easy targets,” said Ganesh Khanal, a garment industry worker trying to board a train at Bangalore railway station.

Khanal said he had been living in Bangalore for nearly three years but was returning to his home in Assam as soon as he could secure a ticket.

Decades of ethnic strife and turmoil in India’s northeast have forced hundreds of thousands of young people to move out of the region in search of education and employment opportunities. They find jobs mostly in the service sector in the big cities, working in restaurants, shops and airlines.
Also trying to leave was Rita Sarma, a college student at the railway station.

“Everyone is saying don’t panic, nothing will happen,” Sarma said. “But I can’t help feeling scared all the time.”

Railway authorities in Bangalore were adding extra coaches on trains heading to Gauhati, the main city in Assam, to help deal with the rush of people.
India’s Home Minister Sushil Kumar Shinde said extra trains were plying between Bangalore and Assam to enable people to return to their home state.

The recent rioting in Assam between ethnic Bodos and Muslim settlers mainly involved land rights. The rioting has largely been brought under control, although sporadic outbreaks have occurred in the past few days.

Curfew was imposed Thursday in the town of Rangiya in Assam, after a mob set fire to a wooden bridge across a river, said J.N. Choudhury, a top police officer in the state. Elsewhere in the state, protesters forced passengers out of a bus and set it ablaze, police said.

On Saturday, two people died and dozens were injured in Mumbai in clashes between police and thousands of Muslims protesting the deaths of Muslims in rioting last month in Assam. Police fired guns into the air to disperse the protesters, who threw rocks and damaged about a dozen buses and police vans in India’s financial hub.

Outbreaks of violence have also been reported from the southern city of Hyderabad and the western cities of Pune and Nashik, said Bijoya Chakravarty, a lawmaker from Karnataka.

The Bodos and the Muslim settlers, who mostly came from the former East Pakistan before it became Bangladesh in 1971, have clashed repeatedly over the years but the recent violence is the worst since the mid-1990s.