Fazlullah group behind attack on Malala 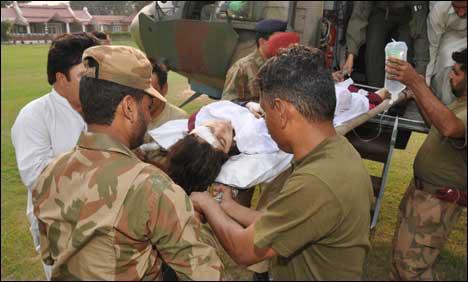 Malala being transfered to UK

Asif Haroon RajaAttack on 14 years old Malala Yousafzai in Swat was a hideous act which has rightly been condemned by great majority. It generated an extraordinary sympathy blitz both in Pakistan and rest of the world and also evoked vociferous denunciation against the perpetrators. She captured attention of the world since she had earned the distinction of Pakistan’s youngest Peace Award winner and had been vocally advocating the cause of girls’ education despite threats hurled by TTP. The onslaught of censure which is now waning may have continued to surge particularly after the TTP audaciously claimed the responsibility, had the media and certain segments within Pakistan not gone overboard in overplaying the incident and foreign powers not jumped in to add fuel to the sympathy wave. Undue interest exhibited by the US, UK and the UN Secretary General aroused suspicions among certain quarters and led to a whispering campaign aimed at deflating Malala hype. The religious forces got activated when the US started pressing Pakistan for an operation in North Waziristan (NW) to avenge the attack on Malala and the ruling regime encouraged by the public outpouring showed signs of caving in.

Extraordinary coverage given to Malala and projecting the incident as the most heartless were other reasons which agitated the Islamists and they decided to block government’s efforts to build consensus for a decisive operation irrespective of the consequences. They argued as to why so much of hullabaloo over Malala who fortunately has survived and is in safe hands with a bright future waiting at her doorsteps. They say why no tear was shed on the tragedy of Lal Masjid in July 2007 where many innocent women and children died as a result of a military operation? They question why such hype has not been unleashed for the drone victims? They ask if anyone has seen the remains of the victims of hellfire missiles. While a single bullet pierced through the skull of Malala’s skull, which miraculously didn’t damage the brain and was safely removed, and she is now fast recuperating in Birmingham Hospital, the ones hit by missiles are blown to pieces. Small body parts in charred condition lay scattered all over the place, which are collected in a bag for burial.

The sickening noise of the drones hovering over NW freely has affected the women and children of the region with acute stress disorder. Each time the drone appears they think it will be their turn to die a horrible death. Except for lip service, no worthwhile protest has been made by the so-called enlightened secular class. Only Imran Khan picked up courage to organize a peace march to South Waziristan. Rather than joining him or as a minimum encouraging him, he was callously criticized by other political leaders since they felt left out and outclassed. It is to the great credit of Imran that he managed to assemble such a large convoy and took along 80 foreign guests including Americans and brought the convoy back safe and sound. It was indeed a big event which for the first time put the US administration on the defensive. Before further momentum could be built, Malala episode took place which eclipsed Imran’s venture. Not only that, airing of a blasphemous movie on U tube which had triggered massive protests all over the world was also forgotten.

As far as brutality of Taliban is concerned, particularly by the band led by Fazlullah, they have indulged in far greater gruesome cruelties when they were sitting on a high horse in Swat and Malakand. Have we forgotten their insane acts wherein soldiers were kidnapped and slaughtered like animals? Videos were released showing the whole ghastly act and beasts like men with knives in their hands dancing around the handcuffed person lying on the ground and joyously cutting his throat. Khooni chowks in Mingora and Saidu Sharif where the decapitated bodies were strung on poles upside down still haunt the people of Swat.

It was in the backdrop of their heinous deeds and annulment of peace deal by Fazlullah in February 2009 that a consensus was developed and Operation Rah-e-Rast launched in Swat and surrounding areas in April 2009. Despite formidable opposition, the operation was a grand success. The Army after dismantling the network, flushing out the militants, resettling over two million displaced persons, carrying out reconstruction and development works, brought complete normalcy in Swat. What went wrong was that like the civil administration, the judicial arm didn’t keep pace with the Army. Thousands of terrorists captured and handed over to the police for trial were released by the law courts. Not one militant was convicted and punished This quandary is in existence in Karachi and Balochistan as well, but the government has not addressed this problem by granting extra powers to the troops employed in counter insurgency operations and establishing special anti-terror courts. Rather, the detractors have been accusing the troops employed in Swat for carrying out extra judicial killings. They support the Baloch separatists in Balochistan and accuse the Army, FC, ISI and MI of extra judicially killing Baloch nationalists.

Despite external and internal pressures, the Army managed to not only clear and hold on to the captured areas, but also has kept the foreign sponsored militants at bay. However, peace which had been restored in the troubled northwestern regions at a heavy cost was disturbed by Fazlullah group. After their ouster, they were accommodated in Kunar and Nuristan by the Afghan government and with the blessing of USA and India. The two districts have become safe havens for this band where the militants are funded, trained and equipped by ANA and RAW under the supervision of CIA and Central Directorate of Afghan Security. From 2011 onwards, fully trained groups were launched to carryout cross border attacks on border villages and security forces border posts in Mehmand, Bajaur, upper and lower Dir and Chitral. Dozens of attacks have taken place and are still continuing despite loud protests made by our government. Repeated attacks forced GHQ to reinforce the levies and police with regular troops. Attack on Salala on 26 November 2011 was also a consequence of Fazlullah militants trying to barge into Mehmand. In one of the attacks in Dir, 19 soldiers were captured and later on beheaded by the militants. The purpose behind patronizing Fazlullah is to put added pressure on Pakistan and make it agree to launch an operation in NW in return for reining in Fazlullah.

In the backdrop of what has been narrated, it is strange that the US is asking Pakistan to launch an operation in NW when Haqqani network or even Hakimullah led TTP has no connection with Malala attack. Pakistan has collected concrete proofs of Fazlullah involvement in the dastardly attack. The foremost requirement is to wind up Fazlullah group’s sanctuaries in Kunar and Nuristan, arrest Fazlullah and hand him over to Pakistan. If the US-NATO troops as well as ANA have no writ in the two provinces, why can’t CIA use its choice weapon (drones) which it is using so mercilessly in NW? These dichotomies have given rise to suspicions that the US and its allies have hatched yet another conspiracy to provoke Pakistan government and the Army to launch an operation in NW. PML-N says that the government is trying to make the intended operation as a pretext to postpone elections. Since the public opinion is divided and political parties are also thinking differently, and Malala fever is over, there seems no plausible reason to open another front in NW. Even if an operation becomes essential, it should not be governed by the US or by individual acts but by national interests.

The writer is a retired Brig and a defence analyst. Email:asifharoon7751@yahoo.com