The Liverpool forward, 27, and the Uruguayan Football Association have until 17:00 Brazilian time (21:00 BST) on Wednesday to respond to Fifa.

Suarez clashed with Chiellini during Tuesday’s Group D game, which Uruguay won 1-0 to qualify for the last 16.

The referee took no action at the time.

The maximum ban Suarez could face if Fifa takes retrospective action is 24 matches or two years.

Suarez has defended himself in an interview with Uruguayan television.

“These are just things that happen out on the pitch,” he said. “It was just the two of us inside the area and he bumped into me with his shoulder. 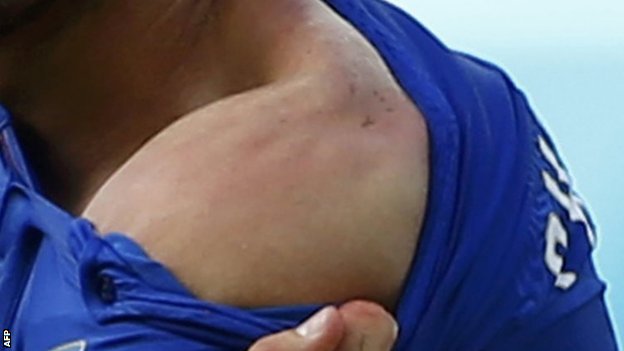 “There are things that happen on the pitch and you should not make such a big deal out of them.”

Chiellini, 29, described Suarez as “a sneak”.

He added: “I’d love to see if Fifa has the courage to use video evidence against him. The referee saw the bite mark, but he did nothing about it.”

After the clash between the players, Suarez went to ground holding his mouth, apparently suggesting he had been elbowed.

Chiellini ran after Mexican referee Marco Rodriguez in an attempt to show him the alleged bite mark, pulling his shirt down to bare his left shoulder.

As he did so, Uruguay forward Gaston Ramirez tried to stop him by pulling the Italian’s jersey back into place.

The incident occurred towards the end of the game, shortly before Suarez’s team-mate Diego Godin scored the only goal of the match.

Godin’s winner eliminated four-times champions Italy from the World Cup and secured Uruguay, semi-finalists in South Africa four years ago, a match against Colombia in the next round.