Gateway Enzyme for Chemicals from Catnip to Cancer Drug Discovered 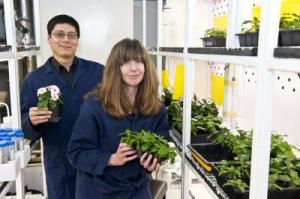 Scientists have discovered an enzyme used in nature to make powerful chemicals from catnip to a cancer drug, vinblastine. The discovery opens up the prospect of producing these chemicals cheaply and efficiently.

They are produced naturally by some plants such as the medicinal Madagascar periwinkle, but faster-growing plants could be used to produce them. With synthetic biology, improvements could also be made to them.   The study, to be published in Nature on November 22, was led by scientists from the John Innes Centre, an institute on Norwich Research Park strategically funded by BBSRC.   “Thousands of chemicals are derived from the enzyme we have called iridoid synthase,” says senior author Dr Sarah O’Connor from the JIC and the University of East Anglia.   “We can start to use it to come up with new-to-nature structures with biological activity of benefit to both medicine and agriculture.”   Many aphids, often important agricultural pests, produce sex pheromone chemicals that are identical to or that closely resemble the iridoid synthase product. Strategic use of these iridoid chemicals could be used to disrupt the aphids’ breeding cycle or to repel them from crops.

The anticancer ingredient vinblastine sulphate is currently derived from the Madagascar periwinkle plant. The iridoid synthase is an essential step in the production of this compound. But vinblastine is produced in just very low levels and the drug has many side effects. The hope is to find a way to produce it more cheaply, easily and with a chemical structure that lessens side effects.   “We need to identify more enzymes to see the entire pathway used in nature to make this potent compound,” said Dr O’Connor.   “But the enzyme we have discovered is also the basic scaffold for many other iridoid chemicals and we can start to experiment with building new chemical structures with biological activity.”

The backbone of all iridoids consists of two fused rings and scientists have been trying to track down what makes this ring system. Experiments showed that iridoid synthase is the enzyme responsible.   Scientists already knew the enzyme preceding iridoid synthase and how the gene encoding it is expressed. The lead author, Dr Fernando Geu-Flores from JIC, therefore looked for enzymes that are encoded by genes expressed in a similar way and narrowed down their search to 20 enzymes.   Research published in the 1980s indicated that the missing enzyme is dependent on a particular compound called NADPH, which narrowed the search down to two enzymes.   O’Connor and her co-workers will also investigate whether the enzyme is important in a simple chemical reaction used by chemists for nearly 100 years. Scientists are trying to identify which enzymes catalyse a reaction called the Diels-Alder reaction, named after the Nobel prize-winning scientists who discovered it. A better understanding of how the iridoid synthase works could open up new ways to make pharmaceutical compounds using synthetic biology.