By Peter A. Kirby

Are miniaturized versions of the world’s largest ionospheric heater (HAARP) all around us modifying the weather? Have electromagnetic frequency generators been installed over major fault lines waiting to trigger massive earthquakes? Has our military developed a super weapon that can vaporize entire cities with lightning from the ionosphere? There is evidence that technology exists and is being deployed.

Way back in 1995, when the seminal book by Dr. Nick Begich and Jeane Manning Angels Don’t Play this HAARP was released, the putative inventor of HAARP, Dr. Bernard Eastlund, speculated that it is ‘entirely possible’ that such technology had already been miniaturized.   Aviation Week reported in 2008 that an airborne version of HAARP had been developed which is towed ‘behind a helicopter.’   The Sea-based X-band Radar (SBX) floating platform utilizes HAARP technology. Here is the Wikipedia listing: http://en.wikipedia.org/wiki/Sea-based_X-band_Radar

Scientists at the University of California Los Angeles and the High Power Auroral Stimulation (HIPAS) Observatory in Alaska have assembled a new generation of ionospheric heaters. This technology, known as ‘Hertzian antennas,’ can, “…match or exceed the peak power of the new HAARP system for a fraction of its cost.” Though most implementations are not capable of producing all of the complex, phased signals produced by facilities like HAARP at Gakona, Alaska or the antenna array at Jicamarca, Peru.   An effective Hertzian antenna could fit in a good-sized back yard.

Have these new Hertzian antennas been placed strategically around the country and the world in a coordinated effort to modify the weather? Ionospheric heaters such as these can be networked and synchronized to increase functionality and effectiveness. Today’s chemtrail/ionospheric heater weather modification operations may involve a network of smaller Hertzian antennas tucked away on the back lots of our nation’s scientific establishments and/or placed (as discussed in the next section) at common weather sheer locations, disguised as center-pivot irrigation systems.   All these antennas could be controlled from a central location such as Lawrence Livermore National Laboratory.   This proposed scenario jibes with the scientists at the HAARP facility who say that their ionospheric heater antenna array goes largely unused. If a network of smaller antennas across the country is handling the day-to-day dirty work, then the HAARP array may only be used occasionally for big jobs such as the Japan earthquake or hurricane Sandy.   EMF generators over earthquake fault lines?

This image was captured from Google Earth: 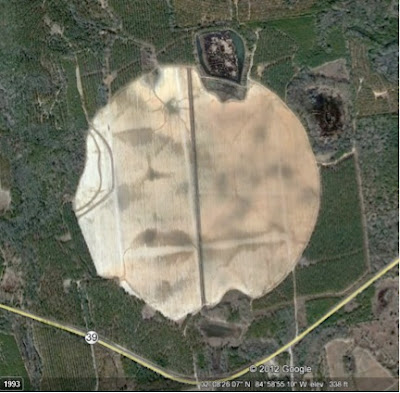 This, at first glance, appears to be a circle formed by a center pivot irrigation system. Such circles appear all over the country as this method of irrigation is very prevalent. But, as you can see, the edges of the circle are irregular and there appear to be diamond shaped structures under the soil. What accounts for these irregularities?   An expert in the field of electromagnetic energy, who wishes to remain anonymous, tells me that this may be an electromagnetic (VLF) antenna installed over a fault line. It could be used in conjunction with other similar facilities to set off a major earthquake.   Great financial and political gain may be achieved through disasters such as earthquakes. In the catastrophe reinsurance market, one can make a lot of money from a disaster. Governments have been known to seize power through declarations of emergency and subsequent ‘relief’ efforts.   Light from the gods

My informant also mentioned current research into how ionospheric heaters such as HAARP could be used in combination to create atmospheric ionization paths which can be used as a lightning weapon capable of completely destroying individuals or vast areas.   Maybe the original purpose of Raytheon is to come up with just such a weapon. Raytheon means ‘light from the gods.’ Raytheon acquired E-Systems; the company that built HAARP.   Dr. Judy Wood in her book Where Did the Towers Go?, documents 1400 burned cars up to one half mile away from ground zero. Nothing else near them was damaged. Trees still had leaves on them. There were reams of unburned sheets of paper. But no humans were burned; though they were covered with ash. The exceptional thing about the cars, she notes, was the fact that they were not grounded while everything else was. Was some sort of electromagnetic weapon used on 9/11? If so, how did cave dwellers from Afghanistan get one of those?