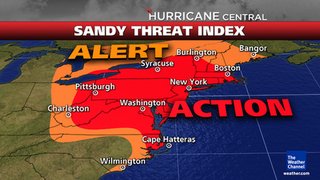 Hurricane Sandy has posed grave threat to New York City. The life has become stand still when the US authorities announced the shutting down of the city and issued the warning of giant hurricane “Sandy.  Both presidential candidates Obama and Romney have postponed their elections campaign. The authorities and massed are now ready to face the storm.  According to the www.weather.com, from Washington to Boston, big cities and small towns Sunday buttoned up against the onslaught of a super storm that could endanger 50 million people in the most heavily populated corridor in the nation, with forecasters warning that the New York area could get the worst of it — an 11-foot wall of water.

The time for preparing and talking is about over,” Federal Emergency Management Administrator Craig Fugate said as Hurricane Sandy made its way up the Atlantic on a collision course with two other weather systems that could turn it into one of the most fearsome storms on record in the U.S. “People need to be acting now.”

Forecasters said the hurricane could blow ashore Monday night or early Tuesday along the New Jersey coast, then cut across into Pennsylvania and travel up through New York State on Wednesday.

“The system is in a steady state now. It’s forecast to have an opportunity to get a little bit stronger, in the sense of a little bit lower pressure, little bit higher winds,” said Hurricane Specialist Bryan Norcross on The Weather Channel on Sunday night. “”Basically, the storm we have is the storm we’re going to get when it turns in toward the coast tomorrow.” Wind gusts exceeding 50 miles per hour were recorded along the Delaware coast on Sunday, as the effects of Sandy crept northward after pounding North Carolina’s Outer Banks most of the day. Winds were expected to increase in intensity on Monday morning, reaching their peak along hundreds of miles up and down the Eastern seaboard in the afternoon. “This one is going to be completely different from (Hurricane) Irene, because of a very different track, coming in from a completely different direction when it comes to shore,” said Dr. Rick Knabb, director of the National Hurricane Center in Miami.

“This leftward turn (to the west) that we’re forecasting… when a cyclone takes a completely different track, that increases the chances of different spots that did or didn’t experience flooding and other impacts to have a different outcome this time. So you have to prepare as if you’ve never experienced this (storm) before, because you haven’t.”

High winds blow sea foam into the air as a person walks across Jeanette’s Pier in Nags Head, N.C., on Oct. 28, as wind and rain from Hurricane Sandy move into the area.

Sandy, a Category 1 hurricane with sustained winds of 75 mph as of Sunday evening, was blamed for 65 deaths in the Caribbean before it began traveling northward, parallel to the Eastern Seaboard. As of 8 p.m., it was centered about 485 miles southeast of New York City, moving at 15 mph, with hurricane-force winds extending an incredible 175 miles from its center. Airlines canceled more than 5,000 flights and Amtrak began suspending train service across the Northeast. New York, Philadelphia, Washington and Baltimore moved to shut down their subways, buses and trains and said schools would be closed on Monday. Boston also called off school. And all non-essential government offices closed in the nation’s capital. As rain from the leading edges of the monster hurricane began to fall over the Northeast, hundreds of thousands of people from Maryland to Connecticut were ordered to evacuate low-lying coastal areas, including 375,000 in lower Manhattan and other parts of New York City, 50,000 in Delaware and 30,000 in Atlantic City, N.J., where the city’s 12 casinos were forced to shut down for only the fourth time ever.

“We were told to get the heck out. I was going to stay, but it’s better to be safe than sorry,” said Hugh Phillips, who was one of the first in line when a Red Cross shelter in Lewes, Del., opened at noon.

“I think this one’s going to do us in,” said Mark Palazzolo, who boarded up his bait-and-tackle shop in Point Pleasant Beach, N.J., with the same wood he used in past storms, crossing out the names of Hurricanes Isaac and Irene and spray-painting “Sandy” next to them. “I got a call from a friend of mine from Florida last night who said, ‘Mark, get out! If it’s not the storm, it’ll be the aftermath. People are going to be fighting in the streets over gasoline and food.'”

Forecasters said the combination could bring close to a foot of rain in places, a potentially lethal storm surge of 4 to 11 feet across much of the region, and punishing winds that could cause widespread power outages that last for days. The storm could also dump up to 2 feet of snow in Kentucky, North Carolina and West Virginia.

In Washington, President Barack Obama promised the government would “respond big and respond fast” after the storm hits. “My message to the governors as well as to the mayors is anything they need, we will be there, and we will cut through red tape. We are not going to get bogged down with a lot of rules,” he said.

He also pleaded for neighborliness: “In times like this, one of the things that Americans do is we pull together and we help out one another and so, there may be elderly populations in your area. Check on your neighbor, check on your friend. Make sure that they are prepared. If we do, then we’re going to get through this storm just fine.” President Barack Obama was monitoring the storm and working with state and locals governments to make sure they get the resources needed to prepare, administration officials said.

The storm also forced the presidential campaign to juggle schedules. Republican presidential nominee Mitt Romney scrapped plans to campaign Sunday in Virginia and switched his schedule for the day to Ohio. First lady Michelle Obama canceled an appearance in New Hampshire for Tuesday, and Obama moved a planned Monday departure for Florida to Sunday night to beat the storm. He also canceled appearances in Northern Virginia on Monday and Colorado on Tuesday.

In New Hampshire, Ann Romney, the wife of the Republican nominee, canceled speaking engagements in Derry and Manchester due to the storm. The Romney campaign said the campaign bus would be used for relief efforts throughout the East.

In Maryland, Gov. Martin O’Malley said early voting on Monday had been canceled due to the approach of Hurricane Sandy. Residents across the state began early voting Saturday, and some were able to vote on Sunday as well. “The storm will throw havoc into the race,” said Sen.

Sandy also killed 11 in Cuba, where officials said it destroyed or damaged tens of thousands of houses. Deaths were also reported in Jamaica, the Bahamas and Puerto Rico. Authorities in the Dominican Republic said the storm destroyed several bridges and isolated at least 130 communities while damaging an estimated 3,500 homes. Anyhow, let’s pray for the safety of mankind and the America from Hurricane Sandy