THREE INDIAN Premier League players and seven Indian book makers have been arrested for spot fixing and more arrests are expected, with speculation that a top foreign player from the Rajasthan Royals is also under police investigation.

Keralan paceman S. Sreesanth and two of his Rajasthan Royals team mates, Ajit Chandila and Ankeet Chavan, were arrested by Delhi police in Mumbai on Wednesday night after the team lost by 14 runs to the Mumbai Indians at Wankhede Stadium.

The three players are understood to have been under investigation for a week, after Delhi police received a tip-off about spot-fixing in earlier matches of cricket’s richest Twenty-20 tournament.

Police have also arrested seven bookmakers in Mumbai and three in Delhi in connection with the case and have issued alerts for two more bookies in Delhi.

A BCCI official confirmed to The Australian that the Indian cricket authority had been informed only this morning of the arrests and were awaiting further details.

All three players had been suspended pending investigations, he added.

But the BCCI official, who declined to be named, said it was the International Cricket Council which had failed to detect evidence of fixing during the six-week tournament.

“The BCCI engages the services of the ICC’s anti-corruption department and pays them a huge sum of money for that,” he told The Australian.

“That system is in place but nothing came from them.”

None of the players would comment on the arrests.

But Rajasthan Royals CEO Raghu Iyer confirmed the three players were picked up by Delhi police last night and the team management was co-operating with the investigation.

A statement issued by the team management said it had “zero tolerance for corruption” and would take action if the charges were proven, though it gave no further details.

“We have been informed that three of our players have been called in for investigation on spot fixing in matches. We are completely taken by surprise. We do not have the full facts at this point and are unable to confirm anything,” the statement said.

“We are in touch with the BCCI on this matter. We will fully cooperate with the authorities to ensure a thorough investigation. The management at Rajasthan Royals has a zero-tolerance approach to anything that is against the spirit of the game.”

The latest scandal comes a year after the Board of Control for Cricket in India (BCCI) was forced to suspend five IPL players, Shalabh Srivastava, Mohnish Mishra, T.P. Sudhindra, Amit Yadav and Abhinav Bali, for spot-fixing in last year’s competition uncovered in a sting by an Indian news channel.

But the tournament has been plagued with controversy since its launch in 2008. 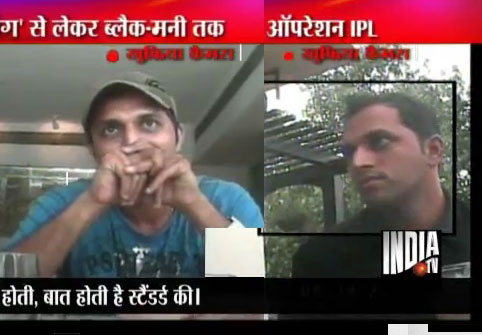