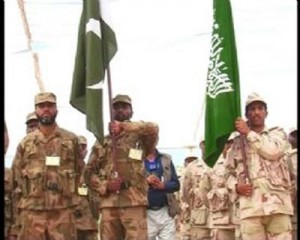 While paying much attention on various internal crises including subversive activities of terrorist outfits in the country, Pakistan’s defence analysts and media anchors have ignored the designs of India which has been trying to disrupt Pak-Saudi relations.

By taking cognisance of rapidly changing geo-political developments in the region like US decision to maintain six military bases in Afghanistan after the withdrawal of foreign troops in 2014—against Pakistan, China, Iran and Russia, Islamabad’s decision to redefine its relationship with US, its tilt towards Russia, its rejection of American pressure to abandon Iran-Pakistan (IP) gas pipeline project, growing Pak-Iranian ties, new wave of drone attacks on Pakistan, unrest in the Middle East, impending threat of Israeli attack on Iran and US war-mongering strategy against Tehran in the Persian Gulf, Indian clandestine aims are to entrap Saudi Arabia by binding the latter with Indo-US secret strategic partnership.

In this regard, Indian Defence Minister AK Antony along with Indian Army vice Chief Lt. Gen. S.K. Singh and Indian Navy deputy chief Vice Admiral Satish Soni paid his first visit to Riyadh in February 13, this year. Antony held crucial discussions with Saudi Defence Minister Prince Salman-bin-Abdul Aziz. After delegation’s return, Indian defence ministry spokesperson Sitanshu Kar said on February 15, “To give a boost to their defence, India and Saudi Arabia have decided to set up a Joint Committee on Defence Cooperation.” KAR elaborated that the Committee would also evolve plans for cooperation in numerous areas. New Delhi suggested that the navies of the two countries could explore practical cooperation in the Indian Ocean.

Notably, being a major and more developed country in all the-related fields, India will get more benefits as compared to Saudi Arabia, and intends to use Riyadh as an instrument of manipulation so as to fulfill multiple designs in the region, especially against Pakistan.

It is mentionable that India whose Prime Minister Manmohan Singh signed wide-ranging agreements with Saudi Arabia on February 28, 2010, known as Riyadh Declaration, emphasising strategic partnership between the two states, had already decided to entrap Saudi Arabia. New Delhi also wants to meet India’s growing requirement of crude oil supplies. According to the Riyadh Declaration, “The two sides agreed to enhance cooperation in exchange of information relating to terrorist activities, and develop joint strategies to combat these threats.” Under the pretext of terrorism, Indian prime minister availed the opportunity to malign Pakistan. In this respect, Manmohan Singh stated, “I explained to him (King Abdullah) the role of terrorism…aided, abetted and inspired by Pakistan…is playing in our country.” He added that he asked the Saudi monarch to “use his good offices to persuade Islamabad to desist from this path.”

Meanwhile, Indian high officials propagated that Saudi Arabia is being targeted by the Al Qaeda, while India too is in a deep state of concern due to Pakistan in this regard.

At the same time, WSJ quoted a retired Indian Gen. Ashok Mehta, saying, “These extraditions would not have taken place without some pressure from the Americans.” The WSJ maintained that the arrests and extraditions “do not mean that Saudi has ended its support for Pakistan which is its traditional ally.

In fact, as part of self-fabricated story by the Indian secret agency RAW, Jundalhad been given Pakistani nationality and a Pakistani passport to convince Saudi Arabia to hand him over to India. It was also due to torture of RAW agents that when Mohammed Ajmal Kasab, the only survival of the 26/11 Mumbai catastrophe was brought face-to-face with Abu Jundal, both of them identified each other. Like Kasab, Jundal gave forced statement, confessing that he was among the handlers of the Pakistani terrorists who came to India, and was imparted training by LeT in Pakistan.

Even then, we suppose that both Ajmal Kasab and Abu Jundal are Pakistani nationals, it does not matter as they are non-state actors. Islamabad cannot be held responsible for the terror activities of these individuals. Notably, fifteen of the nineteen terrorists involved in the 9/11 tragedy were from Saudi Arabia, but US did not hold Riyadh responsible in this respect.

However, under the cover of terrorism, India is acting upon shrewd diplomacy in convincing the SaudiKingdom that Islamabadhas lost will and the ability to fight terrorism. It is frightening Riyadh that in such a scenario,  after the withdrawal of NATO forces from Afghanistan, the fear of Al Qaeda or Taliban taking advantage of the possible return to power is seen as major threat to the region as well as to Saudi Arabia. So Saudi needs Indian help in cracking down against terrorists. But, while following the US blame game, apparently, India shows to the Saudis that another aim of its closer relationship with the Kingdom is to force Pakistan to stop its assistance to the terrorist groups.

Besides, Indian rulers also offered covert help to Saudi Arabia to balance the influence of Iran in the Middle East. India is playing a double game with Riyadh as it openly seeks new strategic partnership with the latter, while covertly, with help of American CIA and Israeli Mossad, it has been backing RAW-paid writers to propagate against the cordial relationship of Saudi Arabia with Pakistan, and to manipulate Saudi-Iranian differences on the basis of Shias and Wahibis. The major purpose also remains to bring Riyadh to the Indo-US clandestine game against China.

On the other hand, these Indian writers have been accusing Saudi   Arabia in supporting Al Qaeda-related Taliban in Afghanistan and Pakistan by setting aside the fact that Saudis have abrogated all ties with these insurgents. They still accuse Riyadh of assisting and giving sanctuary to the Al Qaeda terrorists. They propagate that Saudi money has fuelled the construction of hard-line religious schools in Pakistan that have helped foster militancy in the region, especially Afghanistan.

In this context, one of the RAW-paid Journalists, B. Raman wrote in his article, ‘Jihadi Terrorism: The Saudi Connection’, “The Islamic militants like Basheer and commander Abu Abdel Aziz including their followers have links with each other from Bosnia to Afghanistan and from Jummu and Kashmir to Sudan. Raman alleges, “In Saudi Arabia, the militant Basheer has floated a new organisation called the Muslim Development Force, apparently inspired and controlled by Jihadi elements in Saudi Arabia. He elaborates, “Pakistani Jihadis and Abu Abdel Aziz of Saudi Arabia were linked to the LET which is assisting the Jihadis in Jammu and Kashmir.”

In one of his articles B. Raman openly accuses, “While the Saudis have taken ruthless action against al-Qaida elements within Saudi Arabia, it has avoided taking action against Wahhabi organisations which have been funding and supporting terrorism in other countries in India, Bangladesh and the United States.”

Another RAW-paid Indian writer Hari Sud also implicates Saudi   Arabia in his article, ‘End Muslim Terrorism by Ending Wahabism Influence in Saudi   Arabia.’ He wrote, “All Saudi princes including the King are Wahabis”, while alleging Suadi Arabia as supporter of terrorism in Pakistan, Indonesia and Afghanistan, He explains, “All teachers of the Madarassas, Mullahs of the Mosques under pretext of Hajj pilgrimage underwent Wahabi training in religious schools in Saudi Arabia…in India, Chechnya and Philippines…Muslim terror threat is ever present for worthless causes…majority of the 9/11 terrorists hailed from Saudi Arabia.”

Although India is trying to disrupt Pak-Saudi relations by entangling Saudi Arabia in its secret strategic game, yet by knowing the real intentions of New Delhi, Riyadh cannot deteriorate its ties with Pakistan which is its old traditional and Muslim ally.