Indians project Quaid-e-Azam as a communalist 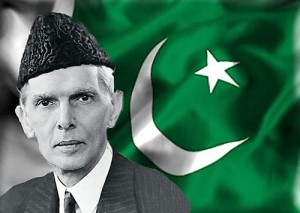 In order to hide their crimes and to distort historical facts, Indian historians and political leaders have chosen to paint Quaid-e-Azam as the ‘villain of the piece’. The Indians propagate the theme that ‘Muhammad Ali Jinnah was a communalist responsible for the bloody break up of Pakistan. He founded a theocratic and or-secular State’. The BJP and other Hindu hardliners even now accuse him of leading a communal agitation to achieve the goal of Pakistan. This is travesty of history and negation of facts that prove beyond doubt that Partition was a legitimate and democratic outcome of the collective choice made by all Muslims and Hindus of the subcontinent. They conveniently and deliberately close their eyes to the hard fact that politics, not religion led to creation of Pakistan.

Acceptance of Cabinet Mission Plan by Jinnah in 1946 demonstrated his earnestness for amicably resolving the communal problem. It was Nehru and his Congress colleagues who wasted that opportunity and dug the last nail in the coffin of united India.  Nehru’s and other Indian leaders’ acts of commission and omission are far too many and have already been narrated by historians.

Indian passions flowing from distorted historiography notwithstanding, the Quaid was as tall a man as history has ever carried. His penetrating vision had room for a united India but he simultaneously foresaw the dangers of unrelenting Congress led Hindu domination. Congress confirmed his fears. He knew parting was inevitable. After the Congress had rejected the Cabinet Mission Plan, the Congress was the first to sign the Act of Partition. The Muslim League signed it subsequently.

In the backdrop of these crystal-clear historical facts, how come Quaid is being blamed by certain segments of Indian society? The blame rests squarely on the shoulders of Gandhi, Nehru and Patel who deliberately turned the course of history. It is naïve to dub Pakistan as a theocratic State if it came into existence as a result of the intransigence of a ‘majority’ that preferred partition over granting the ‘minority’ it’s due rights and proportionate share.

Nirad Chaudhri, in the second volume of his autobiography “Thy Hand, Great an Arch” observed, “I must set down at this point that Jinnah is the only man who came out with success and honor from the ignoble end of the British Empire in India. He never made a secret of what he wanted, never prevaricated, never compromised, and yet succeeded in inflicting unmitigated defeat on the British Government and the Indian National Congress. He achieved something, which not even he could have believed to be within reach in 1946”. Former Advocate General of Maharashtra H.M. Seervai exonerates Jinnah and holds mainly the Indian National Congress responsible for Partition. In his book “Partition of India: Legend and Reality”, Seervai maintains, “It is a little unfortunate that those who assail Jinnah for destroying the unity of India do not ask how it was that a man who wanted a nationalist solution till as late as 1938, when he was 61 years of age, suddenly became a communalist”.

While the entire Indian leadership was involved in the bloodletting of migrating Muslims in India at the time of Partition, Pakistan’s violent birth did not embitter the unbending Quaid. Even after the holocaust he stood by his principles, as his August 11, 1947, address to Pakistan’s Constituent Assembly demonstrated. He had pleaded for equality of all the citizens in the eyes of the State and freedom of worship for all citizens irrespective of their religion, caste or creed. He never uttered any single statement of settling of scores or vengeance. He sought peace and good neighborly relations with India. Even Quaid’s most diehard critics had to admit that he was a man of the highest standard of probity and honor.

For the first time in the hate-filled history of India, an ardent Hindu nationalist L.K. Advani, President of BJP, not only heaped lavish praises upon Quaid during his official visit to Pakistan in the first week of June 2005, but also astonished the Pakistanis and his fellow countrymen by saying that Jinnah was not communal but secular and that Partition was an unalterable reality of history. This visible change occurred probably because of the immense warmth and hospitality that he got both from official and private circles. This was in spite of his past tainted record of being hardcore RSS activist, firebrand Muslim basher and reportedly involved in the assassination attempt on Muhammad Ali Jinnah.

After becoming BJP President in 1986, he was in the forefront to inflame communalism in India. He led Ram Rath Yatra in 1990, spearheaded the Ram Janambhoomi movement that ended in the destruction of Babri mosque and saidthat he was not ashamed of it. He condoned Gujarat pogrom in 2001, vociferously pleaded Hindutva as the basis of nationhood and Hindu cultural nationalism and ruined Agra Summit. His pronouncements jolted the age-old concept of Akhand Bharat feverishly pursued by the Indian nationalist leaders and incensed one-nation theory advocates to an extent that they demanded his resignation if not his head.

The soothing statements given by Advani which were music for Pakistanis were severely criticized by Hindu extremist groups RSS, Sangh Parivar and VHP. It clearly showed that hard-line Hindus who have a lot of say in Indian politics have not accepted Pakistan. Going by the track record of Indian leaders, they have a reputation of backtracking, breaking promises, brazenly uttering falsehoods and above all past masters in deception and intrigue. It was indeed hard to digest such a radical overnight change from a political diehard like Advani. If this change of heart had taken place out of noble sentiments and not political expediency, it was indeed a very good omen. It was the first drop of affection that had dropped on the soil of Pakistan and it was ardently hoped that this drop would soon convert into a river of love and affection to submerge the clouds of mistrust and communal hatred once and for all. It was a first attempt to cut the umbilical cord of communal abhorrence, intrinsically woven with Indo-Pakistan hostility.

It did not take long to discern the real purpose as to why he admired the Quaid so profusely. It triggered a heated debate on Mr. Jinnah in India as well in Pakistan aimed at undermining his standing as a larger-than-life hero and leader. It gave strength to secularists in Pakistan who have always considered Quaid a secular and offended the sensibilities of those who regard him as a forward looking Islamist. The debate generated in India exposed how history is interpreted to suit expeditious and competing political designs and how widespread is antagonistic view across various divides in India about Mr.Jinnah and creation of Pakistan.

Advani was in apposition to bring a change in the mindsets of hardliners that he commands.Jaswant Singh’s book was another attempt to wash away perception in Pakistan that all Hindu Indians hate Quaid-e-Azam and Pakistan. However, later events have proved that Hindu extremism and hatred of Pakistan is increasing rather than decreasing. Indo-Pak peace treaty signed in January 2004 and resumption of composite dialogue to resolve all contentious issues including Kashmir dispute was a big trap to numb the senses of our leaders so that it could activate the eastern front for cultural onslaught and show the soft face of India and to weaken the morals of the youth; and to use Afghan soil for covert war to destabilize Pakistan. Peace mantra was sung to buy time to build series of dams over Rivers Chenab, Jhelum and Indus to dry up Pakistan.

Having inflicted substantial damage through patronized terrorism and subversion, it removed its masked of friendship and came out in true colors after the Mumbai attacks. India’s latest snare is the trade offer aimed at giving a deathblow to our industries. It is expectantly waiting for the Pak Army to get snared in North Waziristan so that it could exercise its military option. Yet we foolishly keep falling into India’s deadly embrace whenever it smiles at us captivatingly under the happy premise that this time it will not harm us.

The writer is tired Brig and a defence analyst.  Email: asifharoon7751@yahoo.com