Is Tendulkar going to Hang Up His Bat? 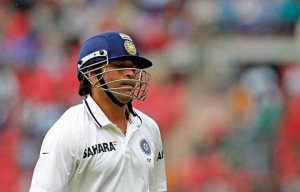 Until recently, it was considered sacrilegious to speak a word against Sachin Tendulkar, the world’s most famous cricketer, who enjoys a God-like status in India, where cricket is practically a religion.

His glaring failure in the recent series against lowly New Zealand, when he was out for paltry 19 runs in the first Test in Hyderabad and 17 and 27 in the second in Bangalore, and, worse still, clean-bowled on each occasion, has turned many of his staunch supporters against him. Even former cricketers are beginning to question his decision to continue playing, if not his place in the Indian team.

While all his old teammates – Anil Kumble, Sourav Ganguly, Rahul Dravid, V.V.S. Laxman – have retired, the 39-year-old Tendulkar has decided to continue despite his poor form.

Tendulkar, who has played more Tests (190), scored more runs (15,533 at an average of 55.08 per innings) and hit more centuries (51) than any other cricketer in history (in addition to being the only batsman with 18,426 runs and 49 centuries in 463 One-Day Internationals), has now gone 25 innings without a hundred in the five-day game since making 146 against South Africa in Cape Town in January 2011.

Sunil Gavaskar, former India captain and the first cricketer to score 10,000 Test runs and 30 centuries, feels that Tendulkar’s reflexes are sliding and his footwork is no longer what it used to be.

“With age, the feet don’t come to the pitch of the ball, the eyes don’t pick up the ball early,” he said during the second Test in Bangalore, reacting to Tendulkar’s dismissal in the first innings.

Gavaskar and fellow commentator Sanjay Manjrekar, a former Test batsman who has played with Tendulkar both for Mumbai and the Indian national team, were clearly unhappy with the way Tendulkar was dismissed after struggling for 50 balls. “The dismissal that was most disturbing was that of the ‘master’ when he was bowled through the gate,” the Gavaskar later wrote in a column in the Times of India.

Echoing Gavaskar’s words, Mohammad Azharuddin, who was captain of India for most of the 1990s, said on Sept. 7 during an India Today event “I have found that he has become a little slow. Reflexes go slow with age and pressure.”

Another former India captain, requesting anonymity, said in an interview that Tendulkar has become “more of a liability than an asset” to the Indian team since it won the World Cup more than a year ago. “Tendulkar has achieved everything,” he said. “He has nothing more to prove to anybody. I’ve the utmost respect for him and his genius.”

But recently, the former captain said, Tendulkar has become a “shadow” of the player he was. “I don’t understand why he wants to tarnish his own image by just hanging on,” he said. “He should make room for some younger player.”

Tendulkar is in no mood to call it a day.

“The day I don’t enjoy wielding bat in my hands, I’ll think otherwise,” he said after receiving the ‘Test Cricketer of 2011’ award on Aug. 30. “But that moment hasn’t come as yet,” he said. (The following day was the disastrous second Test against New Zealand.)

And there are still plenty of players, including several of his former teammates, who say Tendulkar should ignore the critics, and keep playing.

Ganguly, who played alongside Tendulkar for 15 years and led India in 49 Tests, says speculation over the master batsman’s future in the game is uncalled-for. Ganguly is convinced that Tendulkar is still good enough to play at the highest international level, ahead of visits by England and Australia later in the season.

“It’s not the first time he has been bowled,” Ganguly said on Sept. 7, after delivering the fourth Dilip Sardesai memorial lecture at the Bombay Gymkhana in Mumbai. “It has happened when he was at his peak. He had then found a way and he is going to do it again.”

The India team’s current captain, Mahendra Singh Dhoni, is even more optimistic about Tendulkar. “Whenever people talk about his form, he comes up with a brilliant performance,” Dhoni said in Bangalore on Sept. 3, during a post-match news conference.

The next test of Tendulkar’s mettle will be the much-awaited series of four Tests against England, which begin in India in mid-November.