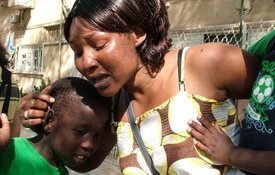 Sudanese asylum seekers in Israel are being issued with documents changing their nationality, allowing them to be removed from the country or imprisoned.

A Sudanese woman is arrested with her children, after being issued with South Sudanese papers. (Credit: RonG LevyZ) The Bureau has identified migrants who have recently been issued with documents labelling them as South Sudanese – despite holding passports showing they were born in areas that remain in Sudan.   Four migrants from the Republic of Sudan have already been flown from Israel to South Sudan, an entirely different country that was formed last year. The South Sudanese authorities refused to accept them at the border and they were sent back to Tel Aviv.

NGOs estimate that over 100 other Sudanese asylum seekers in Israel may have been issued with the wrong nationality in the past three months, and fear there may be more attempts to remove them to South Sudan.   South Sudan only came into existence in June 2011 after a 21-year civil war. Intense hostilities remain between the newly formed country and the Republic of Sudan, with conflicts regularly breaking out on the border.

Israel is unable to deport people to Sudan as it has no repatriation agreement with Khartoum. But a recent deportation order allows it to deport migrants to the country’s newest neighbour: South Sudan.   But now NGOs based in Israel report that people from the Nuba mountain region of Sudan are being issued with temporary visas stating they are South Sudanese by the Ministry of Interior – which make them eligible for deportation. South Sudanese asylum seekers have been asked to leave Israel voluntarily, but those who do not face imprisonment.   Mistaken identity  Thomas Abdallah Tutu, 32, is one such case. He is from the Nuba mountains in Sudan and arrived in Israel in 2007. He lives in Arad, in the south of Israel.

Thomas recently had his documentation recalled and was issued with a temporary visa for Israel that gave his nationality as South Sudanese. Now he is worried he will lose his job as a hotel steward, and could be imprisoned and flown to South Sudan.   ‘I don’t know why,’ said Thomas, ‘I felt so bad. Many people here in Arad have families and children here. Now no one can buy a house and people are becoming homeless.’   The prospect of moving to South Sudan – which even before secession was in conflict with Sudan – is worrying for migrants such as Thomas.   ‘It is a bad situation in South Sudan’, Thomas told the Bureau. ‘There is nothing there and no one has family, houses there or money. They are afraid to go, and confused,’ he said.   Thomas’ future is uncertain: he knows he must leave Arad but is desperate not to return to Sudan or move to South Sudan. ‘If I go there I am sure something bad will happen to me.’   Yael Aberdam is project manager at the African Refugee Development Center (ARDC), an NGO based in Tel Aviv, which works with African migrants.

The ARDC has seen around 70 people with passports and birth certificates suggesting they are Sudanese, who have been given South Sudanese documentation. It estimates the number of those affected may be twice that.   According to Aberdam, many migrants from the Nuba Mountain region, an area fraught with conflict, have been assigned documents stating they are from South Sudan.   ‘We have no idea why they would consider Nubeans as South Sudanese,’ Aberdam said. ‘It gets me very, very angry to have those lives ruined and not even information on why, nor even an apology,’ she added.

The agency stresses there have been no official deportations and removals are technically voluntary. But it also notes that many have been told to leave or they will be imprisoned.   Recent changes have improved the situation, including the recent arrival of a delegation from South Sudan to assist the process, the agency added.   Still, there are concerns about the removal of people to South Sudan. ‘The return taking place from Israel to South Sudan does not meet UNHCR standards outlined in the formulated UNHCR Guidelines for voluntary return,’ Deck said. Several NGOs report that children have been imprisoned in unsuitable conditions, people are given insufficient time to make preparations, and some are imprisoned despite having signed up to ‘voluntary departure’.   ‘We’re implementing the Refugee Convention to the letter, more than almost any other country in the world,’ said Hirschson.

South Sudanese in Israel  There are an estimated 1,500 South Sudanese in Israel, and around 12,000 Sudanese, according to the Israeli government.   Asylum seekers and refugees from South Sudan had been being registered under long-term temporary visas with collective protection. Now the government has deemed South Sudan safe it can potentially send people back to the country.   This is a concern for Deck. ‘There are some South Sudanese that have been in Israel over five years and their children’s only language is Hebrew – and they are forced to depart as the parents no longer have a Convention-related protection concern in South Sudan.

The long-term application of temporary protection for this group has enabled Israel avoid the recognition of individuals as refugees and provide a durable solution for them and their families.’   A familiar problem  African migrant are an issue of concern for the Israeli government. According to the Ministry of Foreign Affairs there are approximately 60,000-65,000 illegal immigrants in Israel. Of those two thirds, around 42,000-52,000, come from Eritrea, Somalia and Sudan – countries which Israel cannot repatriate citizens to.   Israel has previously faced a similar situation with Eritreans, who enjoy collective protection status. However, Israeli media have reported that the government have been using a loophole to allow for some deportations. In 2003 Ethiopia passed a law granting citizenship to anyone whose mother or father was an Ethiopian citizen. This is true of many Eritreans given that the countries split in 1993. The rule change allowed the Israeli government to deport Eritreans to Ethiopia, claiming that they could obtain citizenship there.

More recently, interior minister Eli Yishai is quoted in Israeli newspaper Haaretz responding to last month’s court order, which opened the door for the removal of South Sudanese migrants. He is quoted as saying he ‘hopes this is the first step in a series of measures allowing us to deport [migrants] from Eritrea and North Sudan’.   However the Ministry of Foreign Affairs categorically rejects the notion it is using vagueness around nationalities to allow for the removal of some Sudanese and Eritreans to South Sudan and Ethiopia respectively.   The UK situation  When asked about the UK’s policy of deporting people to South Sudan a UK Border Agency spokesman said ‘We are working closely with the new South Sudanese Government to enable returns to South Sudan, but decisions are always made on a case by case basis.’

In the UK, refugee status is granted for a period of five years. After this time, status is reviewed by the UK Border Agency. UNHCR in the UK is not aware of any cases of those with South Sudanese nationality whose refugee status in the UK has been revoked.   A spokesperson from UNHCR UK went on to say: ‘There is quite a high number of persons originating from South Sudan who remain outside of the country and who have yet to have their nationality ascertained. If possible, they should approach the South Sudanese embassy to obtain the required documentation.’

A version of this article appeared in the Independent.