Jackie Chan: “Hong Kong has Become a City of Protest” 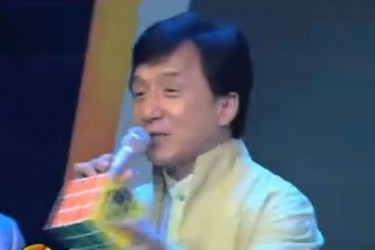 Actor and Kung Fu star Jackie Chan triggered outrage in Hong Kong after his interview with Southern Weekly [1] was published on Dec 11, 2012. During the interview, the Hong Kong-born film star said:

Hong Kong has become a city of protest, we scold China and its leaders, we scold anything we want and protest against everything.The authorities should stipulate what issues people can protest over and on what issues it is not allowed.

However, this is not the first time Chan has made such statements. In 2009, He commented at the Boao Forum [2]: “I don’t know whether it is better to have freedom or to have no freedom. With too much freedom, it can get very chaotic. It could end up like in Taiwan. Chinese people need to be controlled, otherwise they will do whatever they want.”
[3]

A screen shot of Jackie Chan from one of the TV shows he attended.

Chan doesn’t bother to understand why some Hong Kong people choose to take to the streets. He just tends to think that whatever the government does is correct.

I think it’s a shame for the movie industry, because the freedom of expression is fundamental to his line of business, just as the government cannot lay down rules on what movies can be made and what can’t, he ought to appreciate that there should be no restrictions on which protests can be held and which cannot, as long as they comply with the law.

Shameless! Chan is ignoring human rights and freedom of assembly.

On Weibo [7], China’s twitter, most netizens think Chan is “kissing ass”, joking that he has a good shot to join the Communist Party of China. They expressed their envy for HK’s freedom and democracy which Chan himself takes for granted:

黎子Cindy：During my visit to HK, Falun Gong advertisements were everywhere; some people sent out leaflets accusing a former government leader of his framed persecution, nobody stopped them, even if there is any opposition, they would pull the banner and ask them to get out of Hong Kong. If they were in mainland [China], they would be destroyed. Human rights and freedom are still too far away from us.

Keith何：Why can’t we criticize our leaders like they do in a democratic society? If they don’t do a good job, we will criticize them. It’s human rights and freedom, someone like Jackie Chan would not understand it! He said that whoever has the ability can manage it instead of scolding the government. Doesn’t Jackie Chan realize  how our leaders are selected? People don’t get to select, if they did, China wouldn’t have been what it is today!

流氓也有爱情梦：Mainlanders should learn from Hong Kong. People here dare not scold or protest.

大彬仔失业状态:HongKong has freedom of speech, you[Chan] enjoy the right yet you are blaming it, you are like a guy with plenty of food who doesn’t understand the hunger of others.