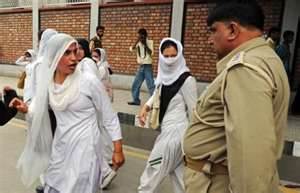 “They hang the victims upside down; they stab them with sharp instruments, force objects such as chilies or thick sticks into their rectums and most of the time the victims have to face severe beatings, electric shocks and crushing heavy rollers”, says a report of Amnesty International on the situation of human rights violation at the hands of Indian forces in the Indian Occupied Kashmir. Human rights violation is one of the most favourite topics for research and discussion for the western society which feels pride in calling itself a philanthropist society. But unfortunately all its humanitarianism and preaching of kindness comes to an end when the victims of human rights violations are the Muslims. Be it Iraq, Iran, Lebanon, Palestine, Afghanistan or Pakistan; the western countries display the same unconcern and indifference to the situation. And when it is the issue of human rights’ violation in the Indian Occupied Kashmir, this cold apathy reaches its climax.

In the blood-dripping valley of Kashmir, every day dawns with fear of new episodes of terror and horror and every sun sets with so many sad incidents of cruelty and brutality in its lap.  Today the people of the Indian Occupied Kashmir are living in a hell where all that belongs to them is at stake. Their sons are slaughtered, their daughters are raped, shops are ransacked and homes are burned, the heads of families are kidnapped and kept in illegal detention for years and years by the Indian military troops. The people of the Indian Occupied Kashmir have been facing this worst situation of human rights violation for the last many decades but none of the so-called caretakers of human rights violation is ready or even willing to listen to their painful sighs and cries. Turning a deaf ear to the agonizing cries of the Kashmiris and crushing all their basic rights has simply become the name of a tradition, a culture and a civilization. The people of the Indian Occupied Kashmir are looking towards the world peace-makers for the remedy of their pains and sorrows. They also want a peaceful and prosperous life of independence liberty and sovereignty. They are waiting for someone who could save them from the clutches of this never-ending series of atrocities.

The unending series of human rights violations is agonizing and painful not only to the people of the Indian Occupied Kashmir but also to the Indian soldiers deputed there in the valley. Most of the officers and soldiers are well aware of the fact that in the name of responsibility and duty they are compelled to support the forces of wickedness and villainy against innocent people but they are unable to detach them from this vicious circle of tyranny and oppression. The situation casts a very negative impact on their personality and as a result of this impact so many soldiers and officers of the Indian army start behaving abnormally; many of them have been declared psycho patients by the doctors. Committing suicide, killing their fellow officers and soldiers with their official weapons and most of the time sexual exploitation of the female members of the army staff; these are very common and frequent incidents.

According to the Kashmir Media Service, since 2003 till today, more than one thousand soldiers and officers from the Indian troops in the Kashmir valley have committed suicide. Only this year till 31st July, more than 62suicides have been reported in the Indian forces. 2006 was the ever worst year when the number of the suicides in Indian army officers and soldiers touched its climax, i.e. 129.

The Defence Institute of Psychological Research India (DIPR) says in a recent analysis on the increasing trend of committing suicide in the Indian army that mental stress is one of the major causes of suicides in the Indian army. Dr Mushtaq Marghoob, a noted psychiatrist in the Kashmir Valley, says that stress in the Indian armed forces has to be considered an expected outcome, and should be planned for as such. He says, “They too are human; being on the forefront, they are witness to severity, and are exposed to traumatic experiences. When facing life-threatening incidents, their coping mechanisms give up, and they fall prey to psychological disorders. A few months back the Rediff News published a report on the increasing number of suicide attempts in the Indian army, the title given to the report was shocking as well as alarming; “Suicides killing more Indian soldiers than wars”. Vicky Nanjappa of the Rediff News said in the report, “The Indian army has been in the news and off late, and more often than not, for the right reasons. The startling statistics in this context paint a very grim picture – the number of suicides in the armed forces is on a steady rise.”

The situation demands no doubt a care and understanding of a very compassionate and sympathetic nature. The soldiers and officers of the Indian army are not the robots. They are also living beings blessed with caring hearts and loving brains. The cruelties they are compelled to do against the helpless people of Kashmir, leave a saddening impact on their hearts and brains and ultimately they have to surrender themselves against their own internal emotional pressure which results in form of suicide. The only solution to this crisis is that the people of the Indian Occupied Kashmir must be given the right of self determination. It is the only viable, original and the most universally accepted way out to this problem.