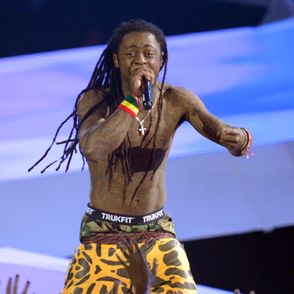 Lil Wayne has revealed the official release date of his upcoming album.   The rapper will greet the New Year with his new LP I Am Not A Human Being II.   Wayne has ambitious plans for 2013.   “February 19, that’s the official date,” he told Sway Calloway on MTV First.   “I’m gonna tour right after the album drops and I’m gonna tour all year round worldwide. [The opening lineup for the tour] never matters. [It’s just] whoever wants to roll with me.”   Wayne has taken his music in an unexpected direction on the forthcoming album.

The production on his beats is a bit more macabre throughout I Am Not A Human Being II.   “Juicy J beats are dark, and I never rapped on dark music like that,” he explained.   “My music was always bright – music for the club or for the radio – this music here is for us to like and us to like only, and I never put music out like that. Maybe to everybody else they’re probably like, ‘Man, your music always been so crazy,’ but to me, the music that’s on this album is more so – like it or not.”