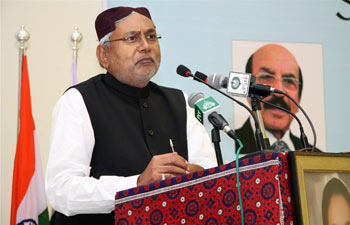 Pakistan desires to have “cordially, friendly, cooperative and good neighbourly relations” with India as there are tremendous opportunities for the two countries to enhance cooperation for their mutual benefit, President Asif Ali Zardari said on Wednesday. In this connection Zardari hosted special Diwali dinner at the presidency for visiting Bihar Chief Minister Nitish Kumar and his delegation. “We want the peaceful resolution of all outstanding disputes for lasting peace in the region,” he said. Let’s hope that India should extend their hands for resolution of Kashmir and water disputes with Pakistan.at number of times Pakistan has shown good gestures while releasing the prisoners etc.

Expressing satisfaction at the ongoing dialogue with India, Zardari said there was a “general consensus” among the mainstream political parties of Pakistan to have good neighbourly relations with India. Welcoming Kumar and his delegation, Zardari extended his greetings for Diwali and said such parliamentary exchanges between the two sides are highly encouraging and will contribute to the deepening of people-to-people contacts.

The two countries should explore the scope for cooperation in fields like education, health and community development, he said. The two sides should also consider establishing friendship groups in their provincial assemblies similar to those existing in the national parliaments, as this would lead to create greater understanding between lawmakers, he added. Zardari decided to host a special Diwali dinner for Kumar on learning that his meeting with the Indian leader coincided with the Hindu festival of lights, Indian officials said.

Kumar and his delegation were earlier scheduled to call on Zardari at the presidency in the evening and the meeting was to be followed by a formal dinner hosted by the Foreign Ministry. The President’s decision reflected the importance being attached to Kumar’s visit by the Pakistan Peoples Party-led government.

During his interaction with Kumar, Zardari also lauded the “rich cultural and civilisational heritage of Bihar” and said greater interaction between the people and greater cooperation and exchanges with the Bihar government in diverse areas would prove mutually beneficial. Zardari appreciated the “Bihar model of development” due to its emphasis on social sector development, particularly in education, healthcare and community development. He also referred to the Benazir Income Support Programme, Pakistan’s flagship poverty alleviation scheme named after his late wife, former premier Benazir Bhutto.

He said Pakistan would be happy to share its experience in eradicating poverty and unemployment with Indian authorities. Kumar thanked the President for warmly welcoming him and his delegation and said the Indian people were keen to promote good friendly relations with Pakistanis.

The Bihar Chief Minister began a week-long visit to Pakistan on Friday. Over the weekend, Kumar has shared his experiences in improving governance in Bihar with functionaries of the southern province of Sindh. Kumar toured the historic site of Mohenjodaro, visited an ancient Hindu temple and addressed a Hindu panchayat in Sindh. He has also spoken of the need for India and Pakistan to co-exist peacefully and work for good governance.