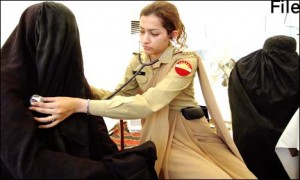 There had been a heart wrenching  story of mass suicides by Indian Punjab farmers(7000 up to now) under the burden of unpaid debt  of state and private lenders, in an Indian magazine(The Week, August 2014) sometime ago. Besides the vast scale of human tragedy and stupendous official apathy what was most striking was the fact that a major canal that irrigates those unfortunate lands has also become the instrument of suicides and bloated dead bodies are collected by the bereaved families at a sluice gate called Khanauri Sluice. Khanauri is a small hamlet on the Punjab-Haryana border. One can imagine the agonizing anticipation with which relatives must await arrivals of their drowned men. Human misery and corresponding criminality of those responsible know no borders .It is happening in India, it has just begun for a different reason in Pakistan .Our sluice is different and far more gruesome.

We are perhaps a country directly under God’s own care to have survived when everybody else is busy dismantling her. One can do with an occasional bite at the ankle, a push here and a shove there but a premeditated and relentless assault upon the very being of the country is quite another matter. The resilience of our people is astounding and their capacity to be brutalized incessantly by almost all departments of the state in an unholy connivance with destructive nature like earthquakes, floods, hunger and disease is boundless.

Pakistan might soon have to look forward to a disabled generation of crippled Polio ridden children and has achieved the dubious international distinction of a Polio intensive state in the company of countries like Afghanistan and Nigeria. Taliban are not programmed to realize what kind of misery  their opposition to vaccination is  going to bring about but one thing is sure their own children will be the foremost among  those crippled by Polio ,slithering miserably over  gravel, dirt and cow dung begging alms on the city streets. Few realize that after Pakistan has been labeled as Polio infected, our remaining tourism is going to vanish, exports will dwindle and travel abroad will become further embarrassing, literally making us the lepers of global community. This is not paranoia but is a dispassionate assessment of the horrible mess we are in and of a few ugly things to come.

Congo virus, Bird flu and Hepatitis B are some of the epidemics just waiting in the wings, because of our fake and ineffective vaccination campaigns and our national madness bordering on criminality to relentlessly pollute our entire river system with untreated city effluents, raw sewage and arsenic laced chemicals. Our Environment officials are quick to raid brick kilns for easy graft but one has still to see them raid large factories spewing poison both in the air and in water sources and posh sprawling housing societies discharging untreated sewage into fresh water streams and natural drainage systems. Even in the federal capital there is hardly a sewage treatment plant. Lye Nullah serves as a master sewer for the twin cities and exemplifies how filthy we like to live beyond our front door. Because of mindless pollution of our river waters, arsenic and chemical in our underground water aquifers has risen to dangerous levels. Has anyone ever paused to note why kidney diseases are on the rise and why incidence of cancer has increased dramatically in our country?

One knows of a hospital which specializes in dialysis procedure related directly to kidney failure.90 % of the patients are poorer than a church mouse and from highly vulnerable tracts of the country. Unclean drinking water, high levels of chemicals in the underground water and a horrifying scale of food adulteration are some of the reasons for the spread of diseases among the poor and the ignored. Just how a poor kidney patient who cannot hope to get two square meals in any given day , is expected to manage 15 to 20 lac rupees for kidney transplant to live on for few more years? Which one of them can afford 20 lac rupees for bone marrow transplant to fight blood cancer??  The result is that most patients report there with the certainty of death in their minds, within months if not a year. Ye they undergo treatment, thankfully free of cost, in the hope of getting few free meals and a relatively wellness till the next week’s repeat dialysis.

There are emotionally devastating SoS appeals and tales of unmitigated miseries that pour into the hospital office daily, each capable of setting up a small bloody revolution of its own. This is virtually a mass murder which none of us would ever be able to absolve from when it comes to accounting for. No wonder people are attracted to Ik and TuQ’s appeals and a menacing wave of resentment against the existing exploitive social order is building up so swiftly. They seem to have touched really the most raw and the most painful nerves in people’s lives. One is amazed at the hideous pomposity and the epic state of denial of the political leadership, judiciary and the bureaucracy who continue to ridicule, play down and contemptuously dismiss the agitation, just because it is led by those whom they tend to dislike or minimize. We are missing the whole point by doing this. Our superciliousness and refusal to face hard facts might cost us very dearly in moral and material terms.

A few philanthropists offering free cancer treatment, dialysis or hosting free food services here and there are not enough. It does not take away the state responsibility towards its underprivileged citizens. Initiatives like income support, free laptops and prestigious highways are not an appropriate and fuller response and it does not work well when most of the fellow countrymen go without food, shelter, medicine, clean drinking water and a decent job.From a crushed and brutalized mass like that none should expect socially responsible living, non-criminality and a charitable view of their leadership. Stone hard insensitivity, horrid self-deception and a dreadful inability to genuinely empathize with the mounting sufferings of the people can hit us in the face like a runaway locomotive. Don’t also expect these indentured serfs to rise to any call for saving abstract notions of democracy, vague ideologies or a bundle of humbug of the like.

People want us to deliver them from poverty, disease, hunger, illiteracy and injustice. They want their children to be healthy, clean, properly fed, school going and safe. We have to give them a solid sense of security of their homes and families, businesses, jobs and a guarantee for the justice to reach them by speediest means possible when needed. They don’t want rural mothers committing collective suicides along with their children just because they could not feed them. They don’t want gang rapes of their little daughters by the sons of the influential men and then see the despicable beasts strut around free, flaunting their power and weapons while the victim immolates herself in the village square .Lets do a serious soul search before the dam breaks. If it does, one thing is certain that all our riches, power and palaces will not be able to save a single one out of us. Last Czar of Russia was shot into ignoble oblivion along with his family in a nameless forest of Russia with not even a decent burial. He too was a mighty potentate with immense imperial power, luxurious palaces and treasures. He too moved regally with thousands of cavalry men clearing the route before him shooing away people like pests. Lest we forget.