Pulling the U.S. drone war out of the shadows 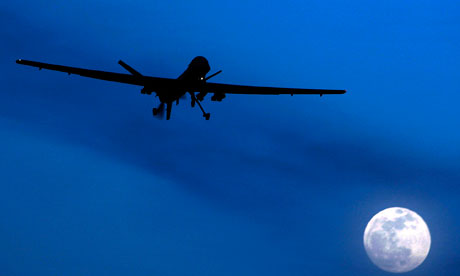 IT’S BEEN 10 years since the first strike by an armed U.S. drone killed an al-Qaeda leader and five associates in Yemen. Since then, according to unofficial counts, there have been more than 400 “targeted killing” drone attacks in Pakistan, Yemen and Somalia — countries where the United States is not fighting a conventional war. About 3,000 people have been killed, including scores — maybe hundreds — of civilians. And though the United States is winding down its military mission in Afghanistan, the Obama administration, as The Post’s Greg Miller reported last week, “expects to continue adding names to kill or capture lists for years.”

All of this causes increasing unease among Americans of both political parties — not to mention many U.S. allies. They are disturbed by the antiseptic nature of U.S. personnel launching strikes that they watch on screens hundreds or thousands of miles from the action. They question whether drone attacks are legal. They ask why the process of choosing names for the kill list as well as the strikes themselves are secret and whether such clandestine warfare does more harm than good to long-term U.S. interests.

Some of these anxieties seem to us misplaced. But the means and objectives of drone attacks — and the Obama administration’s steps toward institutionalizing the system — deserve much more debate than they have attracted during the presidential campaign.

Start with the misconceptions: Many critics second Kurt Volker, a former U.S. ambassador to NATO under President George W. Bush, who wrote on the opposite page Sunday that drone strikes allow U.S. adversaries to portray the United States as “a distant, high-tech, amoral purveyor of death.” While drones may indeed prompt such propaganda, they are really a more effective and — yes — humane way to conduct one of the age-old tactics for combating an irregular enemy: identifying and eliminating its leaders. That drones do not put the lives of U.S. soldiers at risk and cause fewer collateral deaths are virtues, not evils.

Similarly, Mr. Volker asks “what we would say if others used drones to take out their opponents” — such as Russia in Chechnya or China in Tibet. The answer is twofold: Other nations will inevitably acquire and use armed drones, just as they have adopted all previous advances in military technology, from the bayonet to the cruise missile. But the legal and moral standards of warfare will not change. It’s hard to imagine that Russian drones would cause more devastation in Grozny than did Russian tanks and artillery, but if used there they would surely attract international censure.

That brings us to the question of whether the United States deserves such censure for the way it is using drones in Pakistan, Yemen and Somalia — the three places they have been employed outside a conventional war zone. As we have written previously, the strikes meet tests for domestic and international legality. War against al-Qaeda and those who harbor it was authorized in 2001 by Congress, and the United States has the right under international law to defend against attacks on its homeland, which al-Qaeda forces in Pakistan and Yemen have launched. Moreover, the governments of Yemen, Somalia and, up to a point, Pakistan have consented to the strikes.

The Obama administration’s heavy and increasing dependence on drones is nevertheless troubling. As Mitt Romney said in endorsing the drone strikes during the last presidential debate, “we can’t kill our way out of this.” Terrorism can be defeated only by a comprehensive effort to encourage stable and representative governments and economic development in countries such as Pakistan and Afghanistan — a mission the administration, with its harping about “nation-building here at home,” appears increasingly disinclined to take on. Moreover, drone strikes do stoke popular hostility and therefore make U.S. political and diplomatic goals more difficult to achieve.

Perhaps most troubling, the relative ease of using drones, combined with the Obama administration’s reluctance to detain foreign militants, which would be politically difficult at home, has produced a stark record: Thousands of al-Qaeda suspects killed by drones have been balanced by only one significant capture — a Somali who was held on a U.S. warship for two months before being turned over to the U.S. civilian justice system.

In recent months drone strikes in Pakistan have decreased, partly in response to these negative effects. But The Post’s reporting suggests that the administration is working to institutionalize the system of creating “kill or capture” lists and is contemplating the use of drones in more countries where jihadist forces are active, including Libya and Mali. This raises new legal and political quandaries. The further — in geography, time and organizational connection — that the drone war advances from the original al-Qaeda target in Afghanistan, the less validity it has under the 2001 congressional authorization. While the United States has legal cause to retaliate against the terrorists who attacked the U.S. Consulate in Benghazi, Libya, most of the world is unlikely to accept an argument that the Sept. 11, 2001, attacks justify drone strikes more than a decade later in Northern Africa.

In our view, the continuing fight against al-Qaeda and other Islamic jihadists targeting the United States must be considered a war and conducted as such. Nevertheless, when that war ranges far from conventional battlefields, U.S. interests will be better served by greater disclosure, more political accountability, more checks and balances and more collaboration with allies. Drone strikes should be carried out by military forces rather than by the CIA; as with other military activities, they should be publicly disclosed and subject to congressional review. The process and criteria for adding names to kill lists in non-battlefield zones should be disclosed and authorized by Congress — just like the rules for military detention and interrogation. Before operations begin in a country, the administration should, as with other military operations, consult with Congress and, if possible, seek a vote of authorization. It should seek open agreements with host countries and other allies.

There may be cases where the president must act immediately against an imminent threat to the country, perhaps from an unexpected place. But to institutionalize a secret process of conducting covert drone strikes against militants across the world is contrary to U.S. interests and ultimately unsustainable.