Sikh Council on Religion and Education 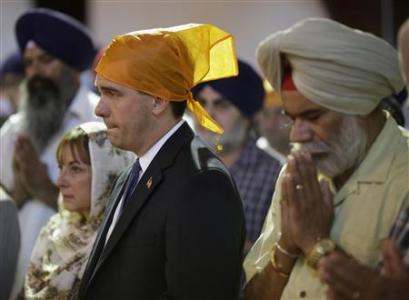 Washington, January 11, 2015: Melissa Rogers, Special Assistant to President Barack Obama and head of the Office of Faith Based and Neighborhood Partnerships office of the White House, delivered a message of reassurance from the U.S. President to the Sikhs. She also expressed empathy with the Sikh community over the recent incidents of violence against Sikhs and the reported case of vandalism at Los Angeles Gurdwara.
Melissa Rogers came to attend the 349th birth anniversary celebrations of the 10th Sikh Guru, Guru Gobind Singh, in Rockville, Maryland. She is the highest ranking representative of Obama Administration’s to attend a Sikh gathering in a Gurdwara. While speaking at Guru Gobind Singh Foundation (GGSF) Gurdwara in front of 350 Sikh men and women, she said, “I bring you greetings from President Barack Obama. It is an honor to bring these greetings to you from him on this special occasion. I want to offer our deepest condolences for some recent violence and attacks against Sikhs and Sikh institutions. These reports are of tremendous concern to us as they are to you. We feel a deep sense of loss for victims of these crimes. When these kinds of things happen there is a feeling of violation and anxiety. We want you to know that we stand by you during these challenging times.”
She added, “These kinds of incidents not only cause great grief among the people who are being attacked and the communities associated with it, but they threaten all of us. Because America draws its strength from the diversity of its people, we want you to know that we stand by you and we will continue to work until we stamp these incidents out. Like you, we believe that an attack on any faith is an attack on every faith. It is essential that all faith communities here and all over the world stand against hate-motivated violence. We will continue to stand with you and we will continue to work to ensure that your security and civil constitutional rights are protected.”
She further said, “The Sikh community has shown tremendous resilience in the face of challenges and I am confident that you will triumph and we will be there with you to triumph over the current challenges that we face together.
Dr. Rajwant Singh, Chairman of the Sikh Council on Religion and Education, said, “We are grateful to President Obama and his administration for their thoughtfulness. We truly applaud the promptness and deliberative actions taken by the White House in the face of rising incidents against the Sikhs in the aftermath of the San Bernardino killings. President Obama has made available all tools of the U.S. Government to send a strong message that hate and violence will not be tolerated against Sikhs or any other community. The highest level of the government is communicating with us to make sure that the community feels safe. That is highly commendable.”
While speaking on the issue of Sikhs in the U.S. Army, Ms. Rogers said, “We will continue to be in touch with you on the issue of Sikhs serving in the United States Armed Forces.”
Inder Paul Singh Gadh, Chairman of GGSF, “We highly appreciate the gesture of President Obama and his message of support to the community through Ms. Rogers. His resolve to stand by the community is critical at this time and it is tremendously assuring to Sikhs across the nation and especially to the Sikh youth.”
Rogers also praised the Sikhs, “I want to thank the community for what it has done for religious freedom for all people. You have been at the forefront of the effort to seek freedom not just for yourselves but for everyone and that has meant a great deal to the nation and the world. I also want to thank you for your partnership with our office and the White House generally as well to serve people in need and otherwise promote the common good of this country and the world.”