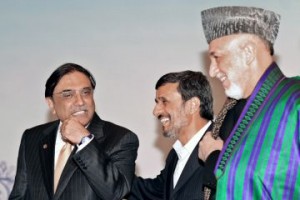 Pakistan is an unfortunate country whose destiny is intertwined with treacherous India in the east which lets go no opportunity to harm Pakistan, and Afghanistan on its northwest which is wild and unreliable.  Afghanistan prefers Hindu India over Muslim Pakistan in spite of the fact that it doesn’t share border with India and is not in sync ideologically.  Except for Taliban regime from 1996 to 2001, all regimes in Kabul were anti-Pakistan and pro-India. India and Afghanistan both patronized by USA are now strategic partners since October 4, 2011 and are jointly engaged in subversive activities against Pakistan.

While India was instrumental in blocking the economic and political growth of Pakistan and in subverting Awami League led Bengalis and truncating Pakistan in 1971, (refer to B Raman’s book ‘Role of RAW in Liberation of Bangladesh), Afghanistan was the only Muslim country which opposed Pakistan’s membership in UN in 1947. In collusion with former Soviet Union and India, Afghanistan supported Baloch insurgency in Balochistan in 1973. Since 2002 it is engaged in covert war in FATA and Balochistan in concert with USA and India. The trio is aspiring to detach the two regions from the body of Pakistan and establish Greater Pakhtunistan and Greater Balochistan.

Tutored by India, Northern Alliance heavy Karzai regime installed by Washington has been consistently blaming Pakistan for supporting Taliban and allowing cross border terrorism. However, it refuses to fence or mine likely crossing places along the border as suggested by Pakistan to prevent alleged infiltration. It ignores the fact that Pakistan has deployed over 1000 border posts while only 200 posts are established on its side. Following in the footsteps of India which has been persistently levying allegation against Pakistan of cross border terrorism into occupied Kashmir since 1990; Afghan regime too is singing this song to hide the secret war going on at a massive scale from Afghan soil to destabilize Pakistan. Kabul is looking the other way to Pakistan’s protests that Maulana Fazlullah and his group that had fled to Afghanistan in 2009 after the launch of Operation Rah-e-Rast were provided sanctuaries in Kunar and Nuristan by Afghan government. The group backed by ANA, RAAM and RAW is involved in cross border terrorism in Mehmand, Bajaur, Dir and Chitral since 2010.

The ruling regime in Kabul has behaved offensively all these years despite being landlocked and dependent upon Pakistan land routes and seaport for its imports and exports. It ignores that three million Afghan refugees are being hosted by Pakistan since 1979 at a very heavy cost. They were not confined to refugee camps under strict watch but were given full freedom to move about, indulge in politics and buy properties. These refugees besides being a heavy burden on its fragile economy for the last 33 years are also a social and security nuisance. Khyber Pakhtunkhwa is worst affected since the biggest concentration is in that province. CIA network operating in Pakistan hunt agents from among the Afghan refugees. But for their assistance to terrorists trained in training camps in Afghanistan by RAW in the form of shelter, intelligence and guidance, Pak security forces by now would have overcome the scourge of terrorism. Recent Uzbek heavy attack on Peshawar airbase was in all probability facilitated by them.

As against its ingratitude toward Pakistan, Afghanistan is indebted to India for having invested about $2 billion for various development projects and is bending over backward to express its undying gratitude. One reason for being so obliged is that Northern Alliance leaders were well looked after by India when they were out in the blue during Taliban rule and their foot soldiers were trained and equipped by Indian Army in Iran.

They are so much beholden to India that they fail to perceive that India with typical Bania mentality never spends a penny in a failing project and where it has no scope of making handsome profit. India’s increasing influence in Afghanistan helps it in encircling Pakistan and in making Afghanistan a captive market. It wants to have a share in the riches of Central Asia stretching up to Caspian Sea by making Afghanistan a jump off point. This desire impelled India to develop Chahbahar Port in Iran and to connect it with Road Dilaram-Zaranj. It is now developing a railway line to connect Chahbahar with Hajipak in Afghanistan. This road/rail connectivity will not only help Afghanistan in reducing its dependence on Pakistan but would also benefit India for its own trade with Afghanistan and beyond in case the shortest route via Wagah is unavailable. Having invested in Afghanistan, India is now looking forward for socio-politico-military-economic returns. It is greedily eying at Afghanistan’s vast reserves of iron, copper, cobalt and gold and Indian companies have already been invited by Kabul to tap one trillion dollars worth of minerals. Indian military is training Afghan security forces and is striving to make ANA dependent upon Indian defence products.

Karzai also forgets that he is a highly unpopular leader even within his own clan and his two-times election as president was largely made possible because of Pakistan’s cooperation. Karzai has forgotten that he was treated as a guest in Quetta throughout the Afghan war against the Soviets and the civil war in Afghanistan. He and his colleagues have also forgotten the sacrifices rendered by Pakistan in pushing out Soviet forces and bearing the brunt of fallout of Afghan war to this day.

Among the Afghans, seculars have traditionally opted to either flee to other countries whenever Afghanistan was invaded or to become collaborators. Even now they refrain from using offensive language against the occupation forces involved in heinous crimes against Afghans. They desire prolonged stay of US military in their country. However, their stance against Pakistan is venomous. Likewise, majority of non-Pashtun Afghan Tajiks, Uzbeks and Darri speaking Afghan Pashtuns also harbor rancor against Pakistan. Northern Alliance leaders and warlords carry a deep grudge that Pakistan had helped the Taliban to gain power. Their hatred has intensified as a result of sustained brainwashing by RAW managed cultural programs. Emphasis of indoctrination is on the youth in schools and colleges. India is providing 2000 scholarships to Afghan students annually. To show its soft face and to win over the population, India has been offering free medical care and medicines in clinics to the poor Afghans across the country.

The character traits of educated Afghan seculars and Northern Alliance warlords are similar to Brahman and extremist Hindus in India. They view Pakistan with abhorrence and are in the habit of blaming Pakistan for the sins committed by their countries. They are adept in throwing wool in others eyes by pretending to be innocent and victims of terrorism espoused by Pakistan. They pretend to be bosom friends when in need and once their purpose is achieved they become cold-blooded. Their behavioral tendencies towards Pakistan are similar.

Indian leaders have been religiously following the script left behind by their Guru Chankya. They have passed on some of the Chankyan recipes to Northern Alliance leaders to badger Pakistan. With such antagonist mindsets of the power wielders in India and Pakistan, one wonders how our leaders have jumped to the conclusion that trust deficit between Pakistan and India and Pakistan and Afghanistan has been bridged and all is well. India has not moved an inch closer toward the resolution of core disputes despite Pakistan having forgotten and forgiven grievous wounds inflicted by India. Afghanistan has also not reciprocated Pakistan’s magnanimity by way of accepting all the four demands of Chairman Afghan High Peace Council. Fazlullah has not been handed over, his safe havens not closed and Pakistan has not been given any role in peace negotiations.  Unilateral concessions and policy of appeasement will lead us nowhere.

The writer is a retired Brig and a defence analyst. Email: asiharoon7751@yahoo.com