Some views gathered on Balochistan 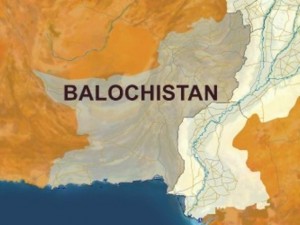 I had the opportunity of meeting Chairman Joint Chiefs of Staff Committee (CJCSC) Gen Khalid Shameem Wynne in his office who was among my bright students in 1982 Command & Staff Course Quetta. It was indeed heartening to note that unlike so many others, power and pelf had not intoxicated him. Despite his shoulders laden with four stars and the aura of his powerful appointment; he was courteous and modest and exhibited no sign of a puffy General Officer. I availed the opportunity to discuss with him host of current issues over a cup of tea. Thirty years of time lapse had not brought any change in his effervescence, uprightness and assertiveness. Balochistan interested him the most where he had spent 17 years of his life including his Army service. He may be the only one in the Army to have served in every rank in Balochistan, which included his stints as instructor in Infantry School and Directing Staff in Command & Staff College, GOC, Commandant Infantry School and Corps Commander. In the backdrop of his extraordinary rich experience in that volatile province, I deemed it proper to extract some pearls of wisdom from him and to know his point of view how he saw the imbroglio which is upsetting every Pakistani. Major points that I gathered are penned in succeeding paragraphs.

Population of Balochistan is 8 Million out of which the Baloch and Brahvis are 0.4 Million, the Pathans 3.5 Million and settlers’ 0.5 Million. Within Baloch dominated areas, Sindhi-Balochis residing in Sibi and Jacobabad areas comprising Jamalis, Magsis are peaceful and friendly. Pat Feeder Canal and Katchi dam help them in their agriculture. Those living in Quetta and immediate surroundings are involved in business activities and smuggling and pose no threat to the federation. Pashtuns do not have the germs of separation. They are better educated and prosperous and are pro-Pakistan and do not subscribe to the Baloch separatist agenda. They are fully involved in cloth business, transportation and agriculture, fruit-growing and also in smuggling. Shia Hazaras are pro-Pakistan and do not support Baloch nationalists seeking separation of Baluchistan. People living along the Makran coast known as Makranis have made fishing as their main source of earning and except for a small number all are peaceful people. Sizeable number of Makranis has settled in Karachi (Lyari).

Only those Balochis residing in Turbat and surroundings towards the coastal side are trouble makers. Their numbers do not exceed 3 – 5 lacs and those who have shifted to the hills and are actively involved in terrorism are about 2-3500. Small portion of Baloch dominated Naushki is connected with Helmand province of southern Afghanistan. Naushki route, along which large desert patch acts as a barrier, was used as a supply route but has now been effectively blocked. Another route via Zhob through Pashtun belt is difficult for foreign agencies and Baloch rebels to frequent because of non-cooperation of the Pashtuns.

Owing to demographic and geographic constraints, the small segment of trouble creators is in no position to achieve independence of Baluchistan since it cannot generate the desired critical mass. Moreover, after Nawab Akbar Bugti, the nationalists are deprived of a popular leader. The runaway Sardars trying to stir up Baloch nationalism and espousing the cause of independent Balochistan are unpopular and have no standing among the great majority of Balochis who are loyal to the concept of Pakistan.

MI-6 is the major foreign agency involved in Balochistan and is assisted by RAW, RAAM and CIA. Brig Neel, the Consul General in Indian Consulate in Kandahar helped by Afghan National Directorate of Security has been the major coordinator to keep the pot of insurgency in Balochistan on the boil. India’s focus has been on students and teachers of schools and colleges in Balochistan, particularly within Baloch dominated regions and Quetta. It has invested huge amounts to subvert the Baloch youth and make them anti-Pakistan. Indians invite Baloch teachers and professors to India and bribe them. RAW’s sustained efforts resulted in making the Baloch students sing their own Baloch national anthem, and hoist Baloch flags instead of Pakistan flag on school/college buildings. Hatred against Pakistan, Pak Army and Punjabis has been ingrained into the young and impressionable minds of Baloch students.

One reason of continuing deterioration of law and order in Balochistan is the reversal of Gen Musharraf’s policy of A and B Areas. Over 95% territory had been converted to A Area under police control which produced good results and helped in keeping law and order under control. The current provincial government reversed his policy in 2008 and handed over control of 95% territory to Levies and only 5% to Police. While 48% population resides in cities, 52% live in rural areas in Balochistan. The Levies are recruited from the Baloch tribes strictly on the recommendations of the Baloch Sardars. As such the Sardars exercise total control over the Levies. While the provincial police has been politicized and made ineffective, Levies are used by MPs as per their desires who are empowered to give salaries to them.

The criminals after committing crimes in cities slip to B Areas, which are within grasping reach (half an hour to one hour distance), where the police cannot meddle. Since the entire Balochistan government including the chief minister is involved in criminal activities, it takes no interest in catching the criminals. It lacks the political will to improve the security situation in the province and to address the genuine grievances of the Baloch. Control of B Areas by the Levies suit the Pashtuns as well since they too are heavily involved in smuggling.

Gen Wynne said that military operations of all sorts were stopped in May 2008 under federal government’s orders once Haqooq-e-Balochistan package was approved. He added that since then no covert or overt operation has been conducted and not a single Army personnel is involved on any operational duty as is being alleged by some Baloch leaders. He also clarified that majority of Frontier Corps wings are deployed along the Afghan-Iran border, while others are on protection duties and receive orders directly from the Interior Ministry. He said that the FC is called out to engage in most troubled areas under orders of the provincial and federal governments.

Although work on converting Kohlu and Sui into military cantonments has been stopped under Federal government’s orders and Sui garrison has been converted into Pakistan Educational City, the CJCSC was of the view that cantonments not only helped in promoting education and bringing prosperity, but also facilitated the Army to promptly respond to the natural disasters in affected areas as well as to foreign threats.

In Gen Wynne’s view, Road Karachi-Turbat-Quetta, Road Sibi-Bolan-Quetta and Coastal Highway must be kept open. He said that 45% cadets in Cadet College near Sui functioning for over a year are Baloch. He was of the view that all Baloch graduates should be given jobs in government departments to help checkmate the trend among the misled youth to join insurgent forces for money. He said that handing over Gawadar Port to Singapore was unwise and added that efforts are in hand to transfer the operational charge of the port to the Chinese. When asked about the future prospects of Baloch insurgency he was candid in saying that Balochistan will continue to simmer for quite some time because of involvement of too many foreign actors, but will not break off as feared by some since the troublesome Baloch do not have the ability to develop critical mass and unless critical mass is developed, insurgency cannot turn into a province wide insurgency as was the case in East Pakistan.

His assurance may not be to the liking of prophets of doom and those having a set agenda but would be of some relief to the great majority who feel pained and worried over the deplorable state of affairs of Balochistan. However, rather than getting complacent, what is urgently required is to control the ongoing simmering by removing socio-politico-economic grievances of the people of Balochistan and above all making the province stable and peaceful. Target killers and those pursuing foreign agenda must be brought to justice otherwise the patriots will get disillusioned.

The writer is a retired Brig and a freelance columnist and a defence analyst. Email: asifharoon7751@yahoo.com