Strategic importance of Gaza for Iran 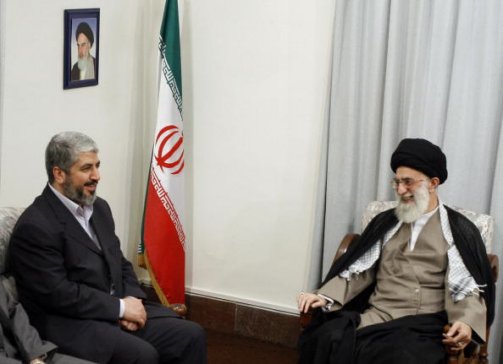 With the ceasefire in Gaza holding, despite some early hiccups, Israeli and American officials are spinning the brief war by porting its lessons over to a potential conflict with Iran. The comparison was made most poignantly in a New York Times article on Friday where officials from Israel and the U.S. described the recent fighting as “something of a practice run for any future armed confrontation with Iran.”

Leave aside the moral unseemliness of a “practice” war, the Times reporting was far too credulous of these American and Israeli officials. The story’s first quotes came from Israeli Ambassador to the U.S. Michael Oren, who compares the Hamas-Israel fighting this week to the Cuban Missile Crisis: Hamas as Cuba and Iran as the Soviet Union. The Times writers, David Sanger and Thom Shanker, add, “It is an imprecise analogy,” because the missiles on Cuba were nuclear. But here’s another way it’s imprecise: Kennedy averted war with both Cuba and the Soviet Union. Apparently, Benjamin Netanyahu is no Jack Kennedy.   That doesn’t mean there aren’t comparisons worth taking note of. Earlier in the week, another news analysis in the Times hinted more clearly at what the Gaza violence might hold for a war with Iran, and it’s not pretty. In that story, former Times Jerusalem bureau chief Ethan Bronner wrote:

The operative metaphor is often described as “cutting the grass,” meaning a task that must be performed regularly and has no end. There is no solution to security challenges, officials here say, only delays and deterrence. That is why the idea of one day attacking Iranian nuclear facilities, even though such an attack would set the nuclear program back only two years, is widely discussed as a reasonable option.

This is a tacit admission of three tough truths about Iran that our national discourse will need to face up to. First, a war is unlikely to shift the strategic landscape: Israeli and American experts think an attack would entrench hard-liners in Iran, just as the Gaza fighting seems to have strengthened Hamas’s hand. Second, military force cannot do what American and Israeli leaders (and the many hawks who support an attack) promise it can: prevent a nuclear armed Iran. Lastly, and perhaps most importantly, a mere delay in Iran’s nuclear progress remains a recipe for creating the same conditions under which Israel operates against the Palestinians: a long war of varying intensity, with no end in sight. What is “cutting the grass” if not a metaphor for unending conflict? Americans over the past decade have become weary of these prolonged entanglements; Israeli policy at the moment seems to be one of entrenching them.

Daniel Levy noted in these pages that the Iron Dome rocket defense system—a main focus of Sanger and Shanker’s comparison—represents a paradigm shift: “Israel, uncharacteristically, seems to take greatest pride in its improved defensive rather than offensive capacity.” That shift in emphasis, in the case of Sanger and Shanker’s analysis, was a zero sum game: offensive capabilities got ignored. Because the U.S. and Israel lack the ability to permanently halt Iranian nuclear progress with military force, these officials pushing the comparison between Gaza and Iran—clearly of a more hawkish bent—ought to be careful where they tread. History is likely to dispense with the euphemism of “mowing the lawn” and call this what it is: perpetual war.