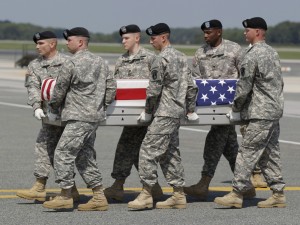 The US and its allies including Britain had initiated war against Afghans with lot of fanfare and had announced victory in December 2001. Having ascertained that Afghan Pashtuns were the real troublemakers in turning Afghanistan into graveyard for invading powers, they were targeted with ferocity with the help of non-Pashtun Afghans. Persecution of Pashtuns was extended to adjoining regions in Pakistan by converting Af-Pak border belt into single battle-zone. However, over eleven years of intense fighting could neither emasculate power of Taliban in Afghanistan nor could stem the menaces of extremism and terrorism. After using excessive force and resorting to guile and deception to divide and weaken the power base of Taliban as it had done in Iraq, the US then made a deliberate effort to entice the hard-line Taliban to enter into negotiations for a political settlement and announced its withdrawal plan. Hope of reconciliation shattered when process of talks facilitated by several countries  to make the Taliban agree to open a political office in Doha in exchange of release of five of their prisoners detained in Gitmo got disrupted in 2011. The Taliban opted out of secret parleys on the plea that the US didn’t live up to its promise.

While the drawdown started in July 2011 and provinces are being speedily handed over to the ANSF, both the military and political prongs of USA have got stalled. The resistance forces have intensified their attacks on occupation forces and ANA since start of 2011 and on number of occasions struck well-protected targets within Kabul as well as targets in northern parts of Afghanistan. IEDs have taken maximum toll of occupying troops and the US military alone has suffered over 2000 fatalities. Mullah Omar and other members of his Shura are still untraceable.

While increasing instances of suicides by American soldiers coupled with increase in trauma cases and indiscipline cases were causing acute anxiety to US military command, sudden spurt in green-on-blue attacks by insiders jolted Gen Allen and Pentagon. ANSF unsatisfactory performance in the battlefield and indiscipline together with poor performance of Karzai led regime in Kabul were other reasons to give sleepless nights to the US military and civilian leadership. NATO forces are getting restless and France has already withdrawn all its combat troops from Afghanistan. Home pressure on US administration is mounting and morale of ISAF suffering from insecurity and homesickness has gone low. Pakistan which had remained a committed ally all these years has also got fed up of US dual standards and discriminatory attitude and its military of late has started to defy stodgy US dictates. All these happenings which are going against smooth and safe transition phase has nonplussed US-NATO and Karzai regime. They have got so entangled in the cobweb that they do not know how to get out of it.

Trouble began when Gen McChrystal didn’t live up to the expectations and Obama had to sack him in 2010 because of his repeated failures in Helmand and other battlefronts. His outburst against Obama administration cooked his goose. In order to regain balance, Obama directed Commander Centcom Gen David Petraeus to takeover additional portfolio of commander ISAF. Regarded as the hero of Iraq, it was expected of Petraeus to repeat its success story in Afghanistan by breaking the alliance between Al-Qaeda and Taliban and after blunting the upsurge of Taliban, defeating the two piecemeal. Disappointment set in when Petraeus kept delaying Kandahar operation on the pretext that until North Waziristan (NW) was cleansed of safe havens of anti-US militants, it will not be safe to step into Kandahar. He forgot that Pak Army had trounced TTP and Mangalbagh militants in Khyber Agency in 2008, and TTP chapters in Swat, Bajaur and South Waziristan in 2009 in quick succession. Later on, militants were flushed out of Mehmand, Orakzai and Kurram agencies as well.

When the flimsy excuse of NW lost its value, the media team of ISAF started propagating from end 2010 onward that the US military had made substantial progress in containing the rising power of Taliban and al-Qaeda. The propagandists argued that the only hitch in defeating them roundly were the sanctuaries of anti-US militants based in NW. One reason of disinformation campaign was to pressurize Obama’s administration to reconsider its decision of troop withdrawal and to delay it. It was as a consequence to disinformation campaign that NATO summit in November 2010 announced that the militants will be fought with full force and that the draw-down plan of quitting by 2014 was still open and could be delayed.

The dawn of 2011 saw the Obama administration making tall claims that lot of progress had been made on the political front and felt optimistic that very soon a breakthrough will be achieved. Its claims and optimism were set aside by Mullah Omar when he categorically denied that he or any of his Shura member ever negotiated with the US or Karzai regime. Sirajuddin Haqqani also dispelled the impression of differences with Mullah Omar and declared his allegiance to him.

The US civil and military officials in unison accused Pakistan of supporting the Haqqani network and mounted massive pressure to mount a military operation in NW and destroy the safe havens. The US also exerted economic pressure through Kerry Lugar aid bill by cautioning that release of aid money would be subject to progress shown against terrorism. When this also didn’t work, the US began expanding CIA network in major urban centres. OBL venture on May 2, 2011 proved costly for USA since it resulted in Pakistan distancing itself from USA and becoming cautious and defiant. Aggression in Salala on 26 November 2011 further steeled Pakistan forcing it to close NATO supply routes and Shamsi airbase and suspending military and intelligence cooperation. This sort of unprecedented defiance dipped Pak-US relations to a breaking point. Opening up of supply routes after an interval of seven months averted the breakup.

The US has lost the war and its departure time is approaching fast but its transition phase is sailing in murky waters. Faced with multiple knotty problems, US wizards have no clue how to ensure smooth and safe exit of troops and heavy baggage by December 2014 and also to leave behind friendly regime in Kabul. Pentagon and CIA are misleading Obama administration and the world about illusive gains. Concocted stories are being fed to blame Pakistan for being selective by not only sparing anti-US groups but colluding with them and striking anti-Pakistan groups only. But no sincere effort is contemplated to put an end to Afghan agony. Efforts to bargain with the Taliban from position of strength are going full pace. There is no let up in US efforts to give India a dominant economic role in Afghanistan and Central Asia. It wants Pakistan to help India in commissioning new Silk Road rather than looking towards Iran for meeting its energy needs. Ahmadinejad’s offer of helping Pakistan in overcoming its energy needs irks USA. Unlike Iraq, US troops are not making a clean break by December 2014, but about 6-10,000 forces would stay back till 2024. So far no steps have been taken to restrain Fazlullah group based in Kunar and Nuristan from launching cross border attacks.