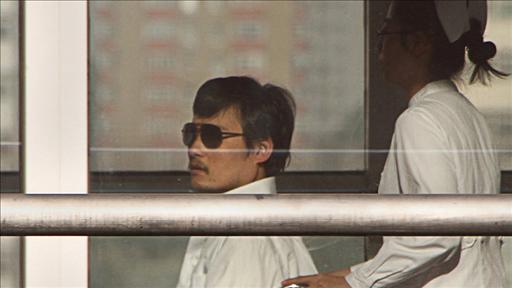 By KEITH JOHNSON And JOSH CHIN

Blind Chinese activist Chen Guangcheng will remain in China under a deal struck between Washington and Beijing and will attend school, according to a U.S. official, 10 days after his escape from home confinement and flight to U.S. protection pressured U.S.-China relations.

The Associated Press reported that Mr. Chen said by telephone that U.S. officials told him that Chinese authorities threatened to kill his wife if he didn’t leave the U.S. Embassy. According to the AP, a U.S. official denied knowledge of the threat, but said Mr. Chen was told his family would be sent back home if he stayed in the embassy.

The deal was set to potentially resolve a thorny diplomatic issue one day ahead of high-level talks between senior Chinese and U.S. leaders, though China on Wednesday demanded an apology over the matter. But it had raised questions over how the U.S. will guarantee the safety of Mr. Chen—who has described abuse under de facto house arrest for the past 19 months—and to what degree Beijing will allow him to resume his activist work.

“I am pleased that we were able to facilitate Chen Guangcheng’s stay and departure from the U.S. Embassy in a way that reflected his choices and our values,” U.S. Secretary of State Hillary Clinton said in a statement, adding that she spoke with Mr. Chen herself.

“Mr. Chen has a number of understandings with the Chinese government about his future, including the opportunity to pursue higher education in a safe environment. Making these commitments a reality is the next crucial task. The United States government and the American people are committed to remaining engaged with Mr. Chen and his family in the days, weeks, and years ahead,” the statement continued.

Mr. Chen, a vocal opponent of forced abortions under China’s one-child policy, will be relocated to a different part of China, the U.S. official said on Wednesday, adding that he will be allowed to attend a university “like any other student.” The official stressed that Mr. Chen didn’t request asylum and made clear he wanted to stay in China.

The U.S. urged the Chinese government not to punish those who helped him and said that Beijing had pledged to investigate local officials who Mr. Chen has alleged mistreated him. China’s Foreign Ministry didn’t respond to requests for comment late Wednesday.

“We think we have helped him secure a better future,” said one U.S. official, while a second official added, “he will have an opportunity to continue to make a difference.”

Officials said that Mr. Chen entered the U.S. Embassy on Thursday with the help of embassy personnel, in their first confirmation of claims by Chinese human-rights activists who had spoken with Mr. Chen. U.S. officials said they helped Mr. Chen on humanitarian grounds because he injured his foot while escaping, adding that he scaled no fewer than eight walls during his flight.

On Wednesday Mr. Chen left the embassy to seek medical attention and to be reunited with his family, which he left behind when he fled his home in China’s eastern Shandong province. Mr. Chen was at Beijing’s Chaoyang Hospital on Wednesday. Police were ousting reporters from the facility Wednesday afternoon.

U.S. officials said Mr. Chen expressed a desire to speak with Mrs. Clinton while on the way to the hospital. They had a brief phone conversation, and Mr. Chen told her, in broken English, “I want to kiss you,” according to officials.

U.S. officials said the issue could linger ahead of talks this week but suggested the deal showed that relations between Washington and Beijing had made progress. “This was not easy for the Chinese government,” said one official.

“It should be pointed out that Chen Guangcheng, a Chinese citizen, was taken by the U.S. side to the U.S. embassy in Beijing via abnormal means, and the Chinese side is strongly dissatisfied with the move,” said Chinese Foreign Ministry spokesman Liu Weimin, according to Xinhua.

He added that China demands that the U.S. “thoroughly investigate the event, hold relevant people accountable and ensure that such an event does not happen again,” according to Xinhua.

A senior U.S. official declined to address the demand for an apology but said “this was an extraordinary case, involving exceptional circumstances, and I do not anticipate that it will be repeated.” The official added, “we intend to work closely inside the U.S. government to fully insure that our policies are consistent with our values.”

Despite the apology issue, an agreement on Mr. Chen’s fate potentially ends a stumbling block between the U.S. and China one day before the beginning of high-level talks. Mrs. Clinton and Treasury Secretary Timothy Geithner arrived in Beijing on Wednesday to hold two days of talks with their Chinese counterparts on economic and strategic matters.

Experts had said Mr. Chen’s plight could distract from or derail talks. U.S. officials over the weekend sent U.S. Assistant Secretary of State Kurt Campbell, the State Department’s top Asia envoy, to Beijing to help defuse the issue ahead of the talks.

A hospital security guard tries to restrain the photographer at the gate of Chaoyang Hospital in Beijing where Chen Guangcheng was staying on Wednesday.

But the deal may raise questions about how the U.S. would guarantee the safety of an activist who has said he was beaten and mistreated since his home confinement began in September 2010.

At least one prominent Chinese dissident said Wednesday that he didn’t believe that was a concern. “There’s no way because this has already become an international issue,” artist Ai Weiwei said, adding that he thought the handling of Mr. Chen’s case demonstrated a “maturing” in the U.S.-China relationship.

Mr. Ai did say, however, that he though Mr. Chen’s ability to continue with the legal advocacy he was pursuing before he was imprisoned would be limited. “If he does it, it will be restricted,” the artist said.

News of Mr. Chen’s release set off a flurry of activity on Chinese social media sites despite blocks on use of his name or related terms. Many users of Twitter-like microblogging site Sina Weibo welcomed the notion that the activist would be allowed to stay in China, but others expressed skepticism over the conditions of his release.

“Phrase of the year: left of his own volition,” wrote Southern Metropolis Daily reporter Feng Xiang, an apparent reference to former Chongqing police chief Wang Lijun, who spent a night in the U.S. consulate in the city of Chengdu in February. Mr. Wang’s stay in the Chengdu consulate began a series of events that led to the toppling of high-flying Chinese Communist Party official Bo Xilai in March.

Others mocked the Chinese Foreign Ministry’s contention in announcing Mr. Chen’s release that “China is a country under rule of law, and its citizens’ legitimate rights and interests are protected by the Constitution and laws.”

“We’re paying a lot of attention, but we really don’t understand,” wrote on user from the coastal city of Xiamen. “Are we rule of law or rule by law?”

Blinded after a childhood illness, Mr. Chen overcame illiteracy and audited law classes on the way to becoming a locally celebrated “barefoot lawyer.” Early in his career, he advocated on behalf of people with disabilities, later making a splash with a high-profile campaign against forced abortions being carried out in his home province under the one-child policy.

After his family-planning campaign led to the firing of local officials, Mr. Chen was detained by local authorities. In 2006, he was sentenced to four years in prison for disturbing the public order, charges supporters say were trumped up.

Upon his release from prison in 2010, he and his family were confined to their home, watched over by plainclothes guards who sometimes beat them severely, he and other activists have said.

Mr. Chen’s plight turned him into a cause celebre among activists and others, a number of whom tried to visit him, which occasionally resulted in confrontations with guards. “Batman” actor Christian Bale was roughly turned away when he tried to visit Mr. Chen in December.

—Brian Spegele contributed to this article.