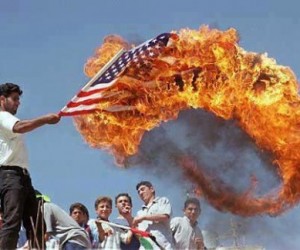 Coming October might be lucky for Obama’s wife since chances of her husbands’ re-election as U.S. President is much more than Republican’s candidate Mitt Romney But overwhelming contributing factors in Obama’s better position over his opponent are; Osama bin Ladin’s(OBL) massacre, under the garb of Al-Qaeda elimination,  leading war against Islam and unconditional support to Israel in the  Middle East.

However, Obama’s administration failed to improve upon the deteriorating economic conditions because of increasing unemployment and bearing billions of dollars expenditure incurring on over 60,000 soldiers deployed in 36 different countries. Republicans are publicly exploiting the issues like poor economy and superfluous policies of keeping troops in Afghanistan even after OBL killing. Thus, Obama’s administration is trying to gain extremist Christian and anti Muslim community votes to nullify the weak link of democratic election campaign. In this connection, strong Jewish community under the direction of Mossad is fully supporting Obama administration for winning of next elections. Notably Americans and some of Western countries might be having strategic, political, geographical, and economical reasons of supporting Israel but  common prevailing perception in Muslim Ummah is, “Jewish are being preferred over Muslims  in Western and U.S. internal and external policies”. Truly speaking, U.S. earned hate as a result of supporting Israeli for crushing Palestinian, Gazans and Afghans. Anyway, like others U.S political and military top brass, Obama administration too either failed or deliberately did not need to understand the real policy of Jewish i.e. to rule the globe by widening the gulf between Christians and Muslims. In this regard, Israeli intelligence agency in collaboration with CIA is hiring radical elements and provides them funds to infuse and promote anti-Islamic sentiments in Christians and others communities. In this regards they are carrying out covert operations to create panic, promote sectarianism, and instability in the Muslim countries.

Recently, America’s Christian extremist organization “Media for Christ” in collaboration with Mossad has produced a highly objectionable movie “Innocence of Muslims”. According to the media reports, Mossad has provided millions of dollars to the producer of released movie. The probable objectives behind release of anti-Islam movie could be; to ridicule “Holy Prophet” due to their hidden fear of rapid expansion of Islam in U.S., West and India, creating hate in their own community against Islamic thoughts, damaging Islamic culture’ sabotaging democracy in Islamic states, attracting and cashing extremist Christians votes in favour of Democrats in coming U.S. elections and lastly paving the path for attacking Iran. Another analytical approach could be that CIA deliberately created anarchy in Islamic countries by intentionally releasing of movie and depicting feelings of “United Islamic Ummah” on international front. Ultimately in this way relinquishing Israeli pressure of attacking Iran in advance of the coming U.S. elections might be made possible on the plea of unsuitable environment for attack. Apparently it could be  nonsense  analytical approach of reading  the situation but possibility could be there that while adopting this very approach, U.S. would drag herself out of the expected  war with Iran and remain successful in increasing insecurity in the  sole Islamic nuclear power i.e. Pakistan. Regardless of the above mentioned objectives of CIA and Mossad, the country wide protests proved that U.S. and Israeli leadership have made another attempt of threatening the global peace and increasing the insecurity for the Americans and West.

In fact, deadly violence over the film, “Innocence of Muslims,” have been initiated nearly two weeks ago in Egypt and later spread to two dozen countries around the world. Protesters have ignored the United States government’s denunciation of the film. Earlier, American ambassador along with five other diplomats have been killed in Libya. On September 14, 2012 two Americans soldiers killed and six Jet Aircraft have been destroyed at Prince Harry Air Base of Afghanistan. U.S. foreign office upgraded their ongoing caution about the travel risks in Pakistan. However, on September 21, 2012, during violent protests, 30 individuals including two police persons have been killed and more than 150 persons severely injured in different cities while agitating over an anti-Islamic film. Millions of individuals came out on the roads and conveyed the clear-cut messages that they are really united and ready to defeat anti Islam forces and misadventure against any country including Iran is unacceptable. Meanwhile; sponsored criminal elements hijacked the peaceful protests and looted banks, shops and burnt the public property. Here, I would like to acknowledge that though Mossad and CIA planted  movie producer and sponsored criminal elements  remained successful in creating panic in one of the largest Islamic country i.e. Pakistan but as a whole failed to defeat Islamic spirit prevailing in Muslims all over the world.

On the same day of 21 September 2012, in India, Indonesia and Bangladesh, several thousand Muhammad’s loving Individuals from Islamic organizations took over roads after Friday prayers. They chanted “death to the United States and death to the French” and set on fire a symbolic coffin for President Obama that was draped with the American flag, as well as an effigy of Mr. Obama. They also burned the American and French flags. They also demanded the termination of relationship with U.S.  “An attack on the holy prophet is an attack on the core belief of 1.5 billion Muslims. Therefore, this is something that is unacceptable,” said Prime Minister Raja Pervez Ashraf in an address to a religious conference Friday morning in Islamabad. In this connection Pakistan also summoned Charge de affairs and launched strong protest against the film. Similarly Hina Rabbani Kher, Pakistan Foreign Minister    who is on U.S. tour has said that Islam is the religion of peace and we must respect all the religions. At this occasion she very rightly added that American Defence Secretary should not cross the parameters while giving comments about Pakistan Army, since the people of Pakistan want mutual respect in relations with the U.S.

Concluding, I say that there is a need to formulate laws which should force everybody to respect the religions for creation of global harmony in the mankind. Pakistani President Asif Ali Zardari is also going to attend the coming UN Heads of States meeting, where he is likely to emphasis on framing some international laws on the respect of all the faiths. Anyhow major responsibility lies with Mr. Ban Ki Moon Secretary General of UN. to ensure  the meeting of UNSC on emergency basis and pass a resolution against  such heinous crime and bring the culprits to justice for saving and respecting of norms and faiths of the masses.