Who holds the key to peace? 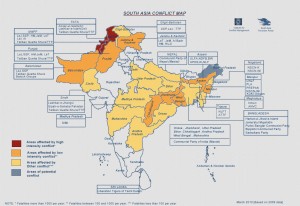 Although Pakistan became the most allied ally of the US in 1950s but this apparently deep-seated alliance was on papers only. Practically, the US always remained inclined towards India even when it was a camp follower of former USSR. The US left Pakistan high dry in the 1965 and 1971 wars with Soviet backed India and also played no role in resolving Kashmir dispute which is the bone of contention between the two arch rivals. While India’s weaponized nuclear program was ignored by the US, Pakistan’s nuclear program was castigated. Pakistan had to bear with tough sanctions frequently while India was never put under sanctions.

Pakistan’s nuclear program has remained a chief irritant for Israel, India and USA. After its nuclear tests in response to Indian tests in May 1998, Pakistan was marked as a target country. 9/11 gave an opportunity to the trio to sort out the targeted Muslim countries under the cover of global war on terrorism. The conspirators decided to use indirect strategy against Pakistan, triggering internal conflicts through proxy war and making the insurgents and security forces fight to death. Direct force was to be used by India after making Pakistan politically, economically, socially and militarily washed-out.

The conspirators felt the need to undertake long, expensive and risky venture duly augmented by propaganda/psychological war because of constrictions. Unlike Afghanistan and Iraq chosen as targets, Pakistan was a very hard nut to crack because of its resilient people, professional and fighting armed forces and nuclear capability. Its strategic alliance with Taliban ruled Afghanistan had provided strategic depth to the two neighbors for the first time and had disrupted India’s plan to encircle Pakistan.

With these constraints in view, Pakistan was treacherously befriended first by the US and latter by its arch rival India and forced it to take a u turn on its Afghan policy and to turn its guns inwards for self-destruction. Fear of fuming US leaders on one hand and lure of friendship with sole super power together with promise of generous aid was so appealing that Gen Musharraf opted to cut the tree on which Pakistan had built its nest after huge sacrifices. Removal of sanctions, rescheduling of foreign debts and heavy investments intoxicated our shortsighted political leaders. They all cheered the military dictator who had usurped power from a democratically elected government two years earlier and chanted that he had saved Pakistan from sure ruination.

Army’s top command also agreed with Musharraf’s contention that had he refused to abide by the conditions of Washington, Pakistan would have been pushed into Stone Age. They justified the change in Afghan policy on the plea that it was impossible to fight the super power and NATO. Similar apprehensions had been aired by the military Generals when Soviet forces occupied Afghanistan in December 1979, but Gen Ziaul Haq over ruled their concerns and decided to support the Afghan Mujahideen.

Those clamoring to hug the US didn’t think for a moment that the US had all along betrayed Pakistan and there was no reason as to why it would not leave Pakistan in a lurch again. They didn’t take into account that India had become strategic partner of USA. They celebrated the signing of death warrant and happily picked up shovels to dig their own graves. Once the Pakistan-Taliban nexus was broken and Afghanistan occupied, rest was easy.

In accordance with the laid out plan to destabilize, denuclearize, de-Islamize and balkanize Pakistan, the initial flame was cleverly lit in Ahmadzai Waziris dominated South Waziristan Agency (SWA) in 2002 and then in Mehsud dominated SWA in 2004. That year, interior Balochistan was also inflamed. In 2006, troops were pushed into North Waziristan Agency (NWA). By then, insurgency in Balochistan was further intensified after the death of Nawab Akbar Bugti in August 2006. Other five tribal agencies in FATA were also ignited in quick succession. Thereon flames of terrorism were diverted towards settled areas of Khyber Pakhtunkhwa (KP). Tank, DIK, Bannu, Lakki Marwat, Kohat, Dara Adam Khel, suburbs of Peshawar as well as Peshawar city, Mardan, Dir, Malakand Division, Swat and Shangla were infected with terrorism.

Lal Masjid episode in July 2007 led to formation of Punjabi Taliban under Asmatullah Muawia and TTP under Baitullah Mehsud. Blackwater made its entry in Islamabad in 2008 and that year the twin cities were repeatedly struck by suicide bombers. In 2009, Lahore was frequently attacked by terrorists under changed tactics of group attacks. In the same timeframe, Karachi became restive as a result of ethnic and sectarian strife and introduction of culture of target killings. By that time US war had become Pakistan’s war. Successful military operations in Swat, Malakand, Bajaur and SWA in 2009 broke the back of TTP in FATA and settled areas of KP, but its patrons helped it in recouping and regrouping in NWA, Kunar and Nuristan. TPP’s affiliates in urban centres also survived since they had not been touched.

Since the Army had taken a backseat in Balochistan from 2008 onwards owing to political and international pressure, the Frontier Corps could only contain the insurgency but couldn’t root it out mainly because of thoroughly corrupt and inept provincial government, incompetent police and unfriendly judiciary and media. Assisted by CIA, RAW and MI-6, the insurgency took the shape of separatist movement. Foreign powers promoted the cause of independent Balochistan espoused by BLA, BRA and BLF.  Raymond Davis incident in January 2011 followed by raid on Abbottabad on May 2, and attack on Salala Post in November 2011 were all aimed at discrediting Army and ISI and clearing the path to steal the nukes and rob Pakistan of its sovereignty.

In Karachi, militant wings of ruling political parties intensified the spree of target killings and the port city recorded 10-12 daily fatalities apart from ever increasing street crimes. The ruling coalition led by PPP which was the product of US-UK brokered infamous NRO broke all records of corruption and incompetence and subjected Pakistan to worst energy crisis. As a consequence, Pakistan began to die an economic death and reached the brink of economic collapse.

Attack on Mehran Naval Base on May 22, 2011 destroying three PC-3 Orions and attack on Kamra airbase in 2012 damaging two AWACs were aimed at denying early warning capability to the Navy and air force. Attacks on Peshawar airbase on December 15, 2012, on Jinnah air terminal Karachi on June 9, 2014 and on Samungli air/aviation bases on August 13, 2014 were designed to destroy passenger aircrafts/jets/cargo planes/helicopters. To their utter disappointment, all attempts to weaken the fighting capabilities of the armed forces were frustrated. Their efforts to steal or destroy nuclear weapons were also foiled by the custodians of nuclear facilities. Memogate scandal was the last nail to be dug in the coffin of Pakistan, but Gen Kayani and Lt Gen Shuja Pasha frustrated the gory plan and saved Pakistan.

Gen Raheel Sharif is now hell-bent to rid the country of the scourge of terrorism. Operation Zarb-e-Azb has disabled network of militants and cleared 90% of NWA. Hideouts of militants are also being systematically destroyed in other parts of FATA and terrorists hunted/nabbed all over the country to prevent blowback. Gen Raheel has also impressed upon the new Afghan leadership to cooperate and help in rooting out terrorism which is a common enemy of the two neighbors. He reminded him that gains made in counter insurgency operations will help in achieving regional stability and in checkmating possible entry of Da’esh in this region about whom some whisperings can be heard. He pressed him to urgently close down the safe havens of runaway TTP leaders in Afghanistan.

Afghan President Ashraf Ghani’s keenness to remove distrust and forge better relations with Pakistan, his cancelation of arms deal with India which Karzai had signed, his request to Gen Raheel for managing Pak-Afghan porous border, training Afghan Army and helping in peace process has undoubtedly alarmed and irritated India. Ghani is also seeking a larger role for China as a mediator in peace negotiations with Taliban. China is keen to increase its investment/two-way trade and is willing to play a role in stabilizing Afghanistan. Kabul’s tilt towards China has further vexed India.

China’s huge investments in Pakistan and development of Energy Corridor and Gawadar aimed at making Pakistan self reliant are not to the liking of India and USA. Both will keep trying to disable Pakistan’s nuclear program. Extremist Modi is a useful tool in the hands of USA to browbeat Pakistan and the former is keeping Washington amused but his jingoism is not to the liking of corporate world which helped him in gaining power. Indo-US nexus want to block/curtail China’s rapidly growing influence in Pakistan and Afghanistan and hence would like the two countries to remain in a state of uncertainty/chaos. Continuity of war in their view would suit their interests.

The key to peace in Pakistan and Afghanistan rests in the hands of the two trouble creators – India and USA. Since the duo cannot be restrained, the two countries are likely to remain turbulent for quite some time. The way out is that Afghan regime agrees to the Taliban demand of pushing out residual force, make peace with them and share power. More so, Pakistan and Afghanistan forge brotherly relations and latter limits Indian presence to allay Pakistan’s security concerns.