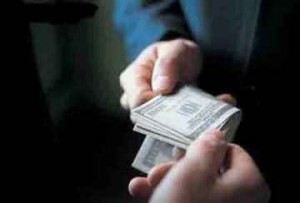 THE figure of Rs12 billion lost daily to corruption may sound staggering, but the assessment does not seem completely off the mark. It is not the figure alone, but the decadence of our society in general and of the ruling elite in particular that matters.

The disclosure made by the NAB chairman has only confirmed the widespread perception about the malaise taking deep root in the country, placing Pakistan a notch higher in the list of most corrupt nations.

Corruption stands at the top of the list of issues that are affecting the country most. It presents not only a serious development challenge, but also undermines democracy and governance. More importantly, corrupt practices have eroded the legitimacy of the government and democratic values. It has infected Pakistani society from top to bottom.

The proliferation and the magnitude of corruption described in the NAB report are shocking. What is most disconcerting, however, is the deliberate denial by the political leadership that there is anything wrong there. Instead of giving serious thought to the endemic problem gravely affecting governance, some cabinet ministers and parliamentarians dismissed the report as a conspiracy against the government.

There is also a demand for the removal of Fasih Bokhari, their own handpicked head of the accountability bureau, and indications are that he may not be staying in office for long for daring to speak out. It is a case of killing the messenger and not reading the message.

It may be true that corruption is a long-standing problem, but it has never been so open and blatant. What is more worrisome is the institutionalisation of bribery and kickbacks at high government levels. Corruption has become an acceptable norm at every level.

Never before in Pakistan’s history have the prime minister, cabinet ministers and senior government officials faced corruption charges while in office. Prime Minister Raja Pervez Ashraf is implicated in the rental power case which earned him the ignominious title of ‘Raja Rental’. The scam has cost the country millions of dollars.

Another prime ministerial hopeful faced arrest in a drug scandal which also involves a son of former prime minister Yousuf Raza Gilani. While the federal minister for religious affairs languished in jail in the Haj scam the federal minister for commerce accepted having received millions of rupees in kickbacks in the NICL case. (He later claimed that the money had been returned.) There have been several instances where the government appointed convicted persons to senior government positions.

Senior government officials openly ask for payoffs even from international aid agencies. It was shocking when a senior official of a UN agency openly said that a federal minister demanded kickbacks on a health-related programme sponsored by the international agency. Such reports have contributed to Pakistan losing the trust of aid and multilateral agencies threatening future relief efforts.

The burgeoning culture of corruption is also manifested in the low number of parliamentarians and cabinet ministers paying income tax. It is most appalling that almost 70 per cent of Pakistani politicians, some of them among the country’s richest people, allegedly do not pay income tax.

They include the president and senior members of the ruling coalition. We should ask whether any of these tax evaders would be able to hold public offices in any other country.

For sure it is not politicians alone who defy the law and moral principles; businessmen and other groups are also involved in corrupt practices. However, the behaviour of the political elite that makes the policies and runs government certainly does not set a good example for others and therefore cannot be condoned on any pretext.

Given the absence of a tax culture it is not surprising that less than one million people in the population of more than 180 million pay income tax placing Pakistan on the list of the countries with the lowest tax-to-GDP ratio and comparable to Afghanistan.

Corruption is at the nexus of the main economic challenge facing Pakistan as seen in the distortion of government budgets, loss of international trust, abysmally low taxation base, inequitable growth, loss of business especially international business and even those small businesses that channel into the informal economy. Above all, corruption is a compromise of our national character.

The expansion of the informal economy, whose inclusion in national accounts would probably lead to higher growth figures, is also a manifestation of rampant corruption in the government that makes it extremely difficult for businesses to operate legally.

A major reason for corruption to thrive is the lack of accountability and failure of law enforcement. Anti-corruption laws have mostly been used as a tool for political patronage or victimisation.

The National Accountability Bureau set up by Gen Musharraf’s military government was one such example. The organisation lost credibility after it pursued selective accountability leaving out those politicians who agreed to join the military-backed government.

For the past four years there is a complete legal vacuum as the government seeks to change accountability laws. The proposed legislation has hit a snag after the opposition parties rejected it as toothless.

In the absence of a credible and independent accountability mechanism there is no effective means to deal with the endemic malaise of corruption. The anti- corruption agencies are prone to being misused by the government, making accountability a complete farce.

Corruption is, perhaps, the most serious problem for a fledgling democracy like Pakistan. It not only undermines democratic institutions and retards economic development, it also contributes to political instability. Fighting against corruption is imperative to save democracy.