Why India Cancelled Talks with Pakistan? 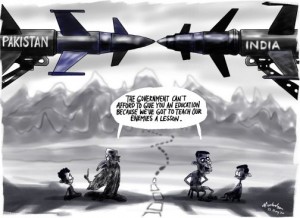 By using the pretext that Pakistan’s High Commissioner Abdul Basit held meetings with the Hurriyat leaders of Kashmir, Indian new government led by the fundamentalist party BJP’s leader and Prime Minister Narindra Modi called off peace talks, scheduled to be held in Islamabad on August 25, 2014 between foreign secretaries of India and Pakistan.

Although India’s suspension of negotiations has come as a surprise not only for both the countries and the peace-loving nations of the region, yet it has exposed real intentions of the BJP rulers who have been breaking all the pervious records. While cancellation of peace dialogue with Islamabad has put a question mark. But its reply is quite obvious, if we see various developments in this respect.

It is notable that the extremist party BJP led by the Indian Prime Minister Modi is implementing anti-Muslim and anti-Pakistan agenda. In this context, BJP leader Dr. Subramaniam Swamy, a staunch promoter of Hindutva (Hindu nationalism) stated on July 12, this year that India needed only two years to defeat Pakistan militarily, and the only solution of Kashmir was war, as “there is no peaceful, democratic solution.

Hence, the decision to terminate the secretary level parleys came as a political maneuvering by Narindra Modi’s regime, showing signs of Indian arrogance and intransigence, driven by emotional reaction, on which BJP top leadership capitalized to win the elections 2014. Besides, India recently intensified unprovoked firing at the Line of Control (LoC) in Kashmir including Working Boundary in Sialkot and other sectors to terrorize Pakistan, without caring the fact that the latter is also a nuclear power.

India has never been sincere in engaging in meaningful peace process with Pakistan. Every Indian government due to international pressure found it easy to make false pledges that it was willing to engage in peace process to resolve all issues including Kashmir dispute with Islamabad. But, New Delhi earnestly endeavored to find excuses and pretexts to cancel peace talks, while shifting the blame to Pakistan. For example, in 2002, under the pretension of terrorist attack on the Indian parliament, India postponed the dialogue process. Again, in 2008, India cancelled the ‘composite dialogue’ on the pretext of Mumbai terror attacks.

It is mentionable that on winning elections, Narindra Modi’s invitation to leaders of South Asian nations including Pakistan’s Prime Minister Nawaz Sharif, to his oath-taking ceremony in May 2014, came as a pleasant surprise for political observers, media analysts and general public in South Asia and world over. The hopes became high and expectations appeared reassuring that relations between India and Pakistan will get normalized and a way forward will be found to resolve all outstanding disputes between both the neighboring countries.

But, on May 27, Prime Minister Modi’s meeting with Prime Minister Sharif who went to New Delhi to participate in the oath-taking ceremony proved faultless, because Modi raised baseless issues of terrorism as pre-conditions to advance the Pak-Indian dialogue to resolve various issues including the core dispute of Kashmir. He said that slow pace of trial against the terrorists regarding the Mumbai 26/11 terror case, being held in Pakistan—Islamabad should take action against the culprits, and should stop cross-border terrorism in India.

While showing unrealistic approach, and talking in the terms of Hindu religious extremism, Indian new prime minister ignored the fact that on July 19, 2013 the Indian former home ministry and ex-investigating officer Satish Verma disclosed that terror-attacks in Mumbai in November 26, 2008 and assault on Indian Parliament in January 12, 2001 were carried out by the Indian government to strengthen anti-terrorism laws.

Similarly, Modi also neglected the statement of Indian ex-Home minister Sushil Kumar Shinde who revealed on January 20, 2013 that organized training camps run by the fundamentalist parties, RSS and BJP were promoting Hindu Terrorism. He also explained that these extremist parties were behind the Samjhauta Express, Meccca Masjid and Malegaon blasts.

As regards cross-border terrorism, former Indian Army Chief Gen. VK Singh openly confessed in September 2013 that special intelligence unit like Technical Services Division were raised by him to operate inside Pakistan, particularly in Balochistan and Azad Kashmir to conduct terrorism and to bribe the politicians in the Indian-occupied Kashmir.

Notably, The Times of India had reported that Congress Party’s heir, Rahul Gandhi feels that “the bigger threat to India may be the growth of radicalized Hindu groups which create religious tension and political confrontation with the Muslim community.”

Nevertheless, Indian hegemonic designs and imperialistic motives coupled with Hindutva radical dream of “AKHAND BHARAT” must be uncovered through foreign and Pakistani media’s investigative projections, arguing that India as a usurper and occupying state is not sincere to engage in peaceful dialogue to resolve outstanding disputes including Kashmir with Pakistan.

In order to show to the western world, and under international pressure, New Delhi resorts to make false pledges and commitments to hold peace negotiations at various levels with Islamabad, displaying that it is keen and eager to resolve all issues through peaceful dialogue. Its real intentions get exposed only when every time, India makes a rash decision to cancel peace talks on one pretext or the other.

It is also a set practice of India to engage with Kashmiri leadership prior to any high level meeting with Pakistan. Kashmiri leaders are the central representatives about whom New Delhi and Islamabad will proceed to decide their fate through peace parleys. Therefore, they cannot be ignored as vital stakeholders. In this regard, Indian interpretations of stakeholders in the light of Simla Agreement (By ignoring the Kashmiri leaders) are absolutely mischievous.

It is of particular attention that in the past, every Indian government led by Indian Congress and BJP had been facilitating meetings of Pakistani officials with the Kashmiri Hurriyat leadership. But, Modi government’s decision to put off Pak-Indian secretary level talks also seems politically-motivated. Besides, soon after assuming power, Modi government, hurriedly decided to forcibly annex and integrate disputed territory of the State of Jammu and Kashmir (J&K), uncovering its intentions to wrap up the article 370 of the Indian constitution which ensures a special status to J&K. The aim behind is to fortify measures and continue its illegal occupation in the J&K. Therefore, United Nations Military Observer Group India and Pakistan (UNMOGIP) in New Delhi was asked to vacate official accommodation, claiming that its role had become irrelevant, and indicating its intention to violate UN Security Council’s resolutions on Kashmir dispute, and to further commit human rights violations in the India-held Kashmir.

So, Indian extremist rulers’ efforts to abrogate article 370 in the Indian occupied Kashmir indicates that BJP led Modi government is proceeding with a plan to promote Hindutva philosophy and annex Kashmir as part of Indian union.

In this connection, external media analysts including those of Pakistan must also point out that India has also disregarded US suggestions to make concerted efforts to engage in dialogue process with Islamabad. While exposing Indian delaying tactics coupled with baseless allegations that cross-border infiltration from Pakistan is on the increase, and Islamabad is not taking any action against the alleged terrorists of Mumbai attacks. Similarly, Indian Army’s surge and LoC violations indicate that India is finding excuses to spoil relations with Pakistan.

Moreover, Indian propaganda that Pakistan has been sponsoring terrorism in Afghanistan also reveals the real face of Indian leadership who spare no time in maligning Pakistan even from Afghan soil where India has itself established secret network, and from where, with the support of anti-Pakistan secret agencies, it has been sending heavily-armed militants who from time to time, target check posts of Pak Army including other civil and military installations.

Nonetheless, BJP government has revealed the true face of Hindu leadership—their anti-Muslim and anti-Pakistan psyche by canceling secretary-level talks with Pakistan on the unjustified plea that Pakistan’s High Commissioner Abdul Basit held meetings with the Hurriyat leaders, prior to holding of the scheduled dialogue. New Delhi’s sudden decision to call off talks has come as a serious blow to peace process between the two countries, sabotaging all signs of optimism that peace will be brought in South Asia under new leadership of Modi–Nawaz affinity. Instead of showing courage to face the issues and take steps to address them, confronting the two nuclear nations, India’s move to cancel the secretary level talks have further uncovered Indian real designs against Pakistan.