Wisconsin Attack Has Troubling Echoes For Many Sikhs 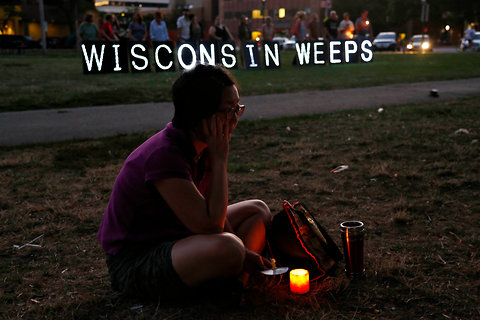 For Sikhs in the United States, India and elsewhere, the killing of six people at a gurudwara, or Sikh temple, in Wisconsin on Sunday afternoon has brought grief and sorrow but also concern that the rampage might be the latest example of a hate crime against Sikhs on American soil in the decade since the 9/11 attacks.

The police have not yet offered a motive for Sunday’s attack, which they characterized as “a domestic terrorist-type incident.” Officers shot and killed the suspect, who was identified only as a 40-year-old white male. The attack seems likely to renew attention on the issue of gun control in America, especially coming not long after the recent shooting at a movie theater in Aurora, Colorado.

But for many Sikhs in the United States, a population estimated at more than 300,000 people, the crime bears troubling echoes to other attacks on the Sikh community, in some cases where the assailants mistook turban-wearing Sikhs as Islamic extremists, reflecting a lack of understanding among many Americans about their religious identity.

“Most people are so ignorant they don’t know the difference between religions,” Ravi Chawla, 65, a businesswoman who moved to Wisconsin from Pakistan in the 1970s, told The New York Times. “Just because they see the turban they think you’re Taliban.” 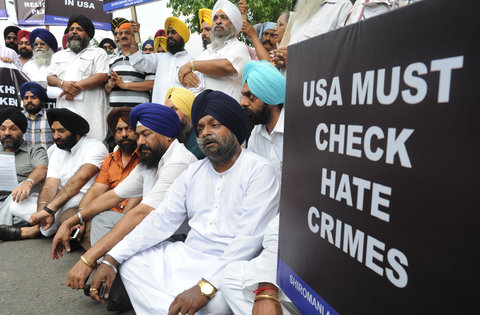 Akali Dal at a protest near the U.S. embassy in New Delhi, Aug. 6, 2012. They were protesting the shooting at a Sikh temple in Wisconsin on Sunday.

In India, several Sikh leaders expressed sorrow and outrage over the attack and called on the authorities in the United States to thoroughly investigate the case to determine the suspect’s motive. Jaswinder Singh, a lawyer and president of Akaal Purkh Ki Fauj, a Sikh organization in Amritsar, called on the American government to do more to prevent hate crimes.

“The situation is naturally very grim here in India,” he said. “We’re very concerned with what happened. We’re very shocked.”

Here’s an account of some of the assaults on Sikhs across the United States in the aftermath of the 9/11 attacks, reported by The New York Times:

Laurie Goodstein and Tamar Lewin wrote of the attacks on a Sikh gas station owner, a Lebanese clerk and Afghan family in Arizona, barely a week after Sept. 11. They wrote:

Frightened by a wave of violence and harassment, Sikhs across the country are struggling to explain to an uncomprehending public that despite their turbans and beards, they are not followers of the Taliban and not in any way responsible for last week’s terror attacks.

In August 2003, Patrick Healy in New York wrote an article headlined “3 Indians Attacked on Street and the Police Call it Bias”:

Three men attacked a family of Indian immigrants outside the family’s Queens home on Sunday night, the police said. The victims said they were punched, spit on and told ”bin Laden family, go back to your country.”

The police said bias may have motivated the attackers, who were described by the victims as white men. One of the victims, 32-year-old Lakhvir Singh Gill, said yesterday that he was sure prejudice and alcohol were behind the attack.

After another attack on Sikh men in Queens, by three young men in July, 2004, Thomas J. Lueck of The New York Times wrote:

The young men ridiculed both Sikh men by referring to their turbans as dirty curtains and telling them to take them off, Mr. Gurcharan said by telephone last night.

”He cussed at me, and I told him that this is not a curtain, this is my turban and it is a religious symbol,” said Mr. Gurcharan, the owner of a nearby restaurant, Tandoori Express, where he and Mr. Khalsa Ji intended to have tea when they left their car on the street and walked past the catering hall.

The sidewalk confrontation reflected a vulnerability of Sikhs in New York City and elsewhere, particularly since the 9/11 attacks, to being singled out for discrimination or attacks because they appear to be Muslims.

”I tried to explain to them that we are not Muslims, and that we cover our heads out of respect for God,” said Mr. Khalsa Ji, who is an honorary priest among Queens Sikhs and who frequently speaks in Sikh temples on the importance of the Sikh traditions and culture.

School children from the Sikh community have also faced harassment, with reports of taunting by other classmates. Sunday’s attack in Wisconsin brought statements from President Obama, his Republican opponent, Mitt Romney, and Prime Minister Manmohan Singh of India.

“Michelle and I were deeply saddened to learn of the shooting that tragically took so many lives in Wisconsin,” the president said. “At this difficult time, the people of Oak Creek must know that the American people have them in our thoughts and prayers, and our hearts go out to the families and friends of those who were killed and wounded.”

Mr. Romney called the shootings “a senseless act of violence and a tragedy” that he said should never befall any house of worship.

Mr. Singh in a statement called it a “senseless act of violence,” and offered condolences to the families of the aggrieved.