U.S and Israel Agreed on Iran

President Barack Obama and Israeli Prime Minister Benjamin Netanyahu are in “full agreement” on the goal of preventing Iran from getting a nuclear weapon, the White House says.

Obama had a 20-minute call with Netanyahu Friday — the president’s only publicly announced one-on-one discussion with a foreign leader this week — following weeks of tensions between the leaders over how aggressively to confront Iran’s nuclear development program.

It also had implications for U.S. domestic politics, coming 39 days before the presidential election.

Republican candidate Mitt Romney has sought to use signs of differences between Obama and Netanyahu over Iran to raise doubts with American Jewish voters about the president’s commitment to Israel and his ability to manage turmoil in the Middle East and North Africa. The Obama administration, in Friday’s statement, said the U.S. alliance with Israel is “unshakable.”

“The prime minister welcomed President Obama’s commitment before the United Nations General Assembly to do what we must to achieve” the goal of preventing Iran from developing a nuclear weapon, the White House said in its statement.

Netanyahu has been pushing the U.S. and western nations to set a “red line” at which point Iran’s nuclear development would warrant a military response. Obama, while urging more time for negotiations and for economic sanctions to pressure Iran, has said the U.S. won’t allow the Islamic Republic to build a nuclear weapon.

In his speech Thursday to the UN General Assembly, Netanyahu held up a cartoon-style drawing of a bomb as a prop to get international attention for his call for the U.S. to issue a more direct warning to Iran.

“By next spring, at most next summer, at current enrichment rates, they will have finished the medium enrichment and moved on to the final stage,” Netanyahu said. “From there it’s only a few months, possibly a few weeks, before they get enough enriched uranium for the first bomb.”

Obama and Netanyahu both attended the UN session in New York this week, though not at the same time. Israeli media reported earlier this month that the U.S. president rebuffed Netanyahu’s request for a meeting, which Obama aides denied.

The reports were published on the same day Netanyahu told reporters in Jerusalem that nations that “refuse to put a red line before Iran don’t have the moral right to place a red light before Israel.”

Romney, who has repeatedly criticized Obama for not meeting with Netanyahu while the prime minister is in the U.S., told reporters after speaking by phone with Netanyahu within hours of Obama’s conversation that while, he hoped diplomacy can resolve the standoff, military action must not be ruled out.

“We spoke about his assessment of where the red line ought to be drawn, and my own views with regards to Iran,” Romney said of the conversation.

Netanyahu’s “views were made very clear in his United Nations speech, and we very much have the same interest, to make sure that Iran does not develop nuclear capability, which would threaten the existence of Israel, threaten devastation, potentially, in other nations of the world,” Romney said.

Romney is trying to undercut Obama’s support from Jewish voters as polls show him trailing the president nationally. Both campaigns have been increasing their focus on Florida, a state where Jewish residents may be an important voting bloc.

Vice-president Joe Biden, campaigning Friday in Florida, said Romney can’t win the general election if he loses there. “We win Florida, this race is over,” he said.

Foreign policy and national security remain areas of strength for Obama. By a margin of 49 per cent to 38 per cent, respondents to a Bloomberg National Poll conducted Sept. 21-24 said Obama would be better suited than Romney to cope with unforeseen events in the Middle East. Forty-nine per cent endorse the Obama administration’s approach to Iran. 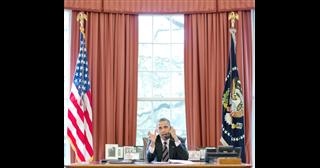