On 21 July 2012, Foreign Sponsored elements are hit a security checkpost located in Pishukan area of Gwadar. In this militant attack, six security personnel were killed and four others injured when unknown terrorists fired rockets at security.  The local administration and Levies personnel reached the scene and shifted the injured to hospital.  The security forces cordoned off the area after the attack and launched search operation to arrest the culprits. Notably, sudden increase in blast waves, militancy in 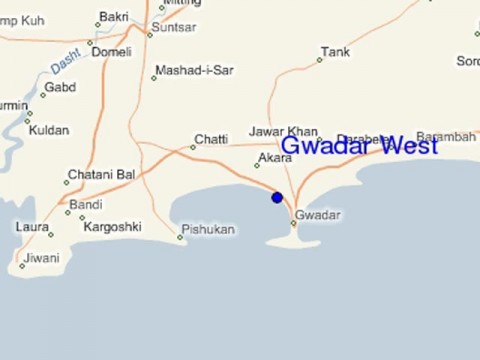 Karachi and resumption of drone attacks just after restoration of Nato supply, beheading of soldiers after abduction from FATA, interference in Balochistan, killing of Pakistani soldiers on Chenab River Bank, raiding under training security elements in Lahore and now attacking security checkpost in Gwadar Port (Balochistan) on 21 July 2012, are clear cut indications of involvement of hands in militancy in Pakistan. All these subversive activities are being controlled by CIA, RAW,MI-6 and Mossad. Afghan National Security Council is providing and facilitating CIA, RAW and other intelligence agencies for launching their agents in Pakistani area. U.S. and her allies are working for grater Balochistan. They are interested in causing instability in Balochistan through terrifying locals and settlers.  As per set foreign agenda local lords of Balochistan immediately allege country’s intelligence agency for any murder and abduction of innocent Baloch. Whereas, it has been found that abduction of people for ransom and killing them have become the routine of daily life in Balochistan. Few days back, honorable Chief Justice visited Balochistan for hearing of missing person case. He has also shown concern over abduction and killing of innocent persons. It is suggested that Chief Justice should take some more visit of Balochistan for punishing the terrorists. Involvement of foreign hands particularly of Americans, British’s and Indian cannot be denied since prevailing adverse security situation and unrest of Balochistan directly linked to  international politics due to  the development and operation of strategically important Gwadar Port. It would also be correct in saying that intensification of current terrorism throughout the country is by design, since our political system is getting strength day by day. Moreover, tenure of ruling elite is almost over and the country is heading towards transitional phase of exchange of powers. Thus, anti-Pakistan elements are more interested in instability of political system while  sabotaging  the peaceful transaction of the system. In fact, the current blast wave was planned, staged and executed by CIA, RAW and   MI-6. Some of the Western, US, Indian and local electronic and print media started throwing slush on own country on the name of violations of human rights in Balochistan. I would like to suggest to the honurable, Chief Justice of Pakistan to take suo motu actions on the murder of soldiers rather than just pulling security and intelligence agencies on the name of missing persons. He should also take suo motu against Baloch lords who are playing in foreign hands, inviting CIA and RAW militancy to carry out in Balochistan. In most of the cases the act of killing is being done by RAW and CIA simply with the aim of fueling militancy of Balochistan. Anyhow, this adventure of maligning and alleging country’s security forces and intelligence agency should be stopped since it is strengthening the hands of foreign intelligence agencies and damaging the country’s solidarity.  US and Indian  joint venture is aiming at (1) supporting rebels Baloch leaders for storming terrorism in Pakistan (2) Incorporating Iranian and Afghanis’ Baloch areas in purposed Greater Balochistan (3) Declaring Pakhtune region as Al-Qaida dominated areas and targeting Gas pipeline. In short, there is a need of resolving the issue politically but at the same time foreign agents busy in fomenting terrorism, abducting and killing innocent people should also be dealt with iron hands. However, true leaders should be approached and given chances for ruling the province and establishment the peace. Media pundit and so called anchors should not try to fuel the issue deliberately or unintentionally. Media should discourage the anti Pakistan elements operating in Balochistan. The author can be approached through zameer36@gmail.com