Indian Corruption can be eliminated? 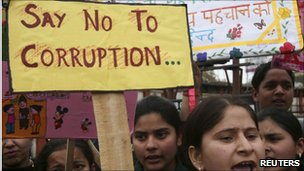 Who are these so-called ‘shining-lights’ of probity in public life? A year-and-a-half ago outside Maharashtra, perhaps, not many people knew the now well-known social activist Anna Hazare.People like Kejriwal, Bhushans, Manish Sisodia, Shazia Illmi or Kumar Vishwash were truly the unknown commodities then. Anna Hazare while launching his Lokpal movement reminded people about Gandhiji’s Satyagraha.The movement attracted immense media curiosity. And many of us started wondering whether it’s a moment of real transformation? However that chimera proved to be a mere mirage in the scorching desert of wicked Indian politics.

On the occasion of Anna Hazare’s first fast at Jantar Mantar (April 2011), Arvind Kejriwal was seen excitedly speaking with the huge circus of media assembled there to cover the show.   In great gusto he was busy drawing parallels with the Arab spring with that of animated crowds assembled at the Jantar Mantar. Later on Kejrival was severely criticised by a section of media for his comparison of anti-corruption struggle with that of Tahrir Square movement for freedom and democracy. I still remember that I miscued an unknown but incautious-looking Arvind Kejriwal simply as part of the burgeoning crowds.

Yet the individuals ostensibly led by Arvind Kejriwal were not to be simple (read sincere) anonymous members of the crowd. In less than two years, thanks to the unprecedented media coverage, these activists, presuming themselves to be a revolutionary group of people, are imagining to be a political alternative to the traditionally corrupt politics of the day. Had the raucous crowd raising a spectacle of anarchy been men of revolution and not the mere rabble-rousers, the country of a billion plus population would have truly been grateful to the group for striving to liberate it from the stranglehold of the most corrupt breed of politicians. In case the band of hooligans as we believe is not the real people then who they are is required to be ascertained rather conclusively.

But before that a haunting question why the fakes have succeeded in generating such an overwhelming response at least in the media if not at the grassroots level, needs to be addressed first.

Politics does not operate in vacuum. Owing to multitudes of power centres, the dysfunctional UPA regime is deeply inflicted with a policy paralysis that’s an old prognosis well known all over the place. Still that is not the real reason for the public ire targeted at the rulers of the day. Revelation of one corruption scandal after another has actually stunned the public. If the Congress, now permanently headed by the Gandhi family, has proved to be the most corrupt, the BJP, seen to be an alternative but presently headed by Nitin Gadkari and operated by the likes ofBS Yeddyurappa, has emerged even worse. And the regional satraps led by the BSP, SP and DMK have fared disgustingly. Who can disagree with the prime minister’s statement that ‘the mindless atmosphere of negativity and pessimism that is sought to be created over the issue of corruption can do us no good?” But had there been no 2G spectrum or coal scam or Robert Vadra-DLF issue, where was the scope for any ‘atmosphere of negativity and pessimism’.

Apparently, nowadays whosoever enters the public arena claims to be driven by the egalitarian motives… only to serve the people. However, the politics has turned out to be a sheer entrepreneurship. Since the politicians stands fully exposed, a few enterprising groups pretending to be revolutionaries have ventured out to fill the vacuum. The decay has reached such proportions that any effort through simple electioneering is now incapable of stemming the rot. Only a revolution or a mass-based movement of social reform can usher in a real change. Had the group of people aiming to effect a change been true revolutionaries, instead of entering politics, they would have preferred to sacrifice their lives in order to overhaul the system. Had they been true reformers, they would have tried to transform the society with love and compassion even carrying along the so-called sinners instead of adopting a holier- than-thou attitude and castigating everybody else as evil and corrupt.

They are not even the run of the mill politicians. They should have approached people at the grassroots level and not indulge in any mudslinging. Making noise in the TV studios may make Kejriwal & Co an instant hit, it will not fetch them any votes. The boisterous noise being made by them has nothing to do with any change; it’s a shortcut to fame, and who knows, even to the corridors of power, eventually.