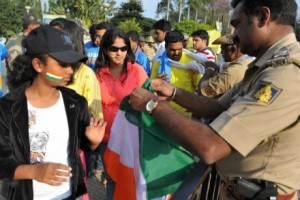 Pakistan has defeated India by five wickets in their first high-security cricket match in India since the terrorist attacks in Mumbai four years ago.

Pakistan has defeated India by five wickets in their first high-security cricket match in India since the terrorist attacks in Mumbai four years ago.

The tour, the first by Pakistan since 2007, began with a Twenty20 international played under lights at Bangalore’s Chinnaswamy stadium.

Police were out in full force, iron barricades were lined up and riot control vehicles put on duty as security men patrolled the stadium in the the capital of the southeastern state of Karnataka. “We have completely sanitised and secured the stadium,” a security officer said.

Police were seen carrying out heavy frisking at the imposing stadium gates with as many as 200 surveillance cameras mounted on mastheads for constant monitoring of all activity in and around the ground.

Ticket-holders like 22-year-old Anindita Dhar, who were asked to queue up at least three hours in advance, complained about the stifling security.

“I was carrying binoculars but they are not allowing me to take them inside. This is so unfair,” she said.

“I understand their concerns but somehow for me it takes the fun out of watching the game.”

A crack police force, including Indian army commandos, was also guarding the luxury ITC Gardenia hotel, where both teams are staying.  The teams are set to play another Twenty20 match in the western city of Ahmedabad followed by three one-day matches during the short series.

The Islamist attacks in Mumbai – which killed 166 people – led to a complete breakdown in relations between the two countries before efforts were renewed last year to bring their fragile peace process back on track.

Hardline Indian nationalist organisations including Vishwa Hindu Parishad and the Shiv Sena have both threatened to hold protests outside all the venues, slamming the Indian government’s decision to host Pakistan.

New Delhi has defended the move by stressing the need to move the “clock forward”.

Cricket has been used in the past to mend diplomatic ties between the two nations, which have fought three wars since they gained independence in 1947.

In a show of diplomatic bonhomie, the prime ministers of both nations symbolically shook hands as they watched their teams in the semi-final of last year’s World Cup in the northern Indian city of Mohali.

But the prospects of a diplomatic dividend this time round appear slim and there has been no announcement of a visit by a Pakistani leader for any match.

The local press on Tuesday lamented the lack of buzz that usually marks the build-up to India-Pakistan encounters.

The Indian Express newspaper noted that the series had been put together more as a “neighbourly gesture than anything else, leaving the tour in many ways fighting for context”.