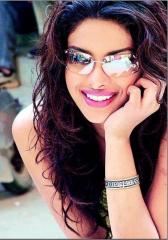 It’s been a good year for Priyanka Chopra. Two of her films made Rs. 100cr each, and one of them got picked as India’s official entry to the Oscars. Acting apart, she has also released an international single — ‘In my city’ — for which she garnered a lot of attention.

Now, it seems like Priyanka’s time to reap the rewards is here. The actor has been nominated for the World Music Awards (WMA) 2013 — an international award show for world music artistes.

If this wasn’t enough recognition in itself, Priyanka’s competitors for the awards — Rihanna, Lady Gaga and pop sensation Madonna — are further proof of her abilities. The source says, “It’s a matter of pride for an Indian artiste to be recognised and nominated alongside some of the best names in the world. Priyanka is absolutely delighted.”

On being contacted, Priyanka’s spokesperson confirmed the news. Meanwhile, even in India, the actor looks set to earn several nominations for her performance in Barfi! among other films.