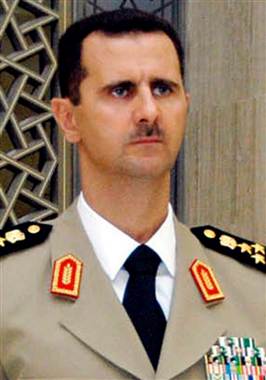 Having forcibly changed Qaddafi’s regime in Syria, the US and its western allies are now fully focused towards Syria since early 2011 to bring down Bashar al-Assad’s regime. Billions of dollars are being pumped in to support Syrian rebels and to keep the civil war inflamed. In April 2012 Summit held in Turkey and attended by 70 nations, a total of $ 100 million was pledged by Saudi Arabia, Qatar Kuwait and UAE to pay salaries to rebels Free Army. The US pledged $12 million and London $800,000 including satellite communication and night vision goggles. NATO military advisers based in Syria have been providing guidance to the rebels. High salaries provided to the rebels were a bait to lure government soldiers to defect.

Almost 30-month old civil war in Syria which has cost over 100,000 lives including 40,000 civilians and resulted in displacement of seven million including two million fleeing to other countries has suddenly become explosive because of use of chemical weapons in Ghouta near Damascus on August 21 killing 1400 people including children. Syrian President Assad categorically denied the charge, but international imperial alliance forged between NATO and Arab client states seeking perpetuation of violence within Syria has a fixed agenda of his forcible removal.

Truculent Obama tied his hands by impulsively blurting that if Syria crosses the red line, it will face military action. He is now pumped up and wants to strike Syria irrespective of the consequences. While the US Senate has approved military action, Obama is now seeking Congress approval for strikes against Syria. Although US officials insist that US limited military intervention in Syria in which no boots will be used on ground is not aimed at regime change, but to deter Assad from reusing chemical weapons; however, the fact remains that support to Syrian rebels is being extended by the US to bring down Assad regime which is anti-US and anti-Israel and pro-Russia and install pro-US regime. This change in US-Israel-Arabs view would weaken and isolate both Iran and Hezbollah and help in attacking Iran at a later date.

Like in case of Iraq in 2003 when millions protested in Europe and in USA against intended invasion, the Europeans and Americans weary of war and suffering the impact of economic depression have once again come out on the streets, protesting against contemplated use of force in Syria. Both the US and British leaders have lost their credibility after their big lies to justify interventions in Afghanistan and Iraq and false promises of restoring peace and democracy. The people are not prepared to get duped again since the two misadventures resulted in destruction of two sovereign countries and loss of over two million lives together with displacement of millions. They now know that the dramas were enacted to serve selfish interests of the elites only. The common people had no share in the loot.

The drama of gas attack has been staged since the rebels despite being armed to teeth are not making any headway and are getting demoralized while the government forces are rapidly gaining ground. Hezbollah has helped in getting Qusayr vacated by the rebels and area north of Homs is also on the verge of falling to Syrian forces. Notwithstanding that minority Alawides under Assad is ruling majority Sunnis, and Assad has used excessive force against the rebels ruthlessly; he having witnessed the tragic end of Qaddafi cannot afford softness. The rebels have been no less brutal. They have been chided by Human Rights Watch for committing myriad human-rights abuses against Syrian people. They have been involved in kidnapping, detention, torture of security forces, pro-government elements and militias.

Limited strikes by NATO, which include cruise missiles, air strikes and drones, would aim at crippling the Syrian air defence and all such military targets which have enabled the Syrian armed forces to gain an upper edge over rebels. Such a destructive exercise had been undertaken by UK-France military against Libyan regime in support of rebels. This support will be available to Syrian rebels for their final assault on Damascus. The US thinks that US intervention will help in boosting the sagging morale of Syrian rebels. The US has become more assertive after the change of leadership in Tehran under the assumption that the new Iranian President Rouhani being moderate will not act recklessly like his predecessor.

It is indeed ironic that loss of 100,000 lives has not evoked any sympathy in US led western world but loss of 1400 lives has made them grief stricken. On what moral grounds Obama and his hawkish team are huffing and puffing and trying to moralize Syrian regime when the US military is occupying Afghanistan since November 2001 and devastating the country and its people? Are drones used with impunity in FATA, Somalia and Yemen less lethal than chemical weapons?  Is Sarin gas deadlier than nuclear bombs dropped in Hiroshima and Nagasaki, or Agent Orange in Vietnam, or cluster bombs, daisy cutters and depleted uranium in Afghanistan, or white phosphorous in Fallujah (Iraq)?  Aren’t US and UK the biggest manufacturers of chemicals and commercializing the product in international market?

Why such a hullabaloo over poisonous chemicals when these were used by Iraq against the Kurds of Hallabjah in 1988 and against Iran’s military in the Iran-Iraq war in Fao Peninsula, or by Russia in Chechnya. The US and the West didn’t utter a word since at that time Saddam was a good boy being their ally and Chechnyans were Muslims. Where were their moral scruples when Israeli forces used white phosphorous and cluster bombs against Gazans? Why are US and Russia holding on to their stockpiles of chemical weapons when they were required to destroy them by April 2012?  What role OIC and Arab League are playing to defuse the volatile situation. Arab League is paradoxically egging on the UN to take measures against Syria, which implies, ‘sort out Assad regime’. How are Arab countries so sure that it will not be their turn next time?

How does the US leadership lecture on human rights when it is the biggest violator of human rights? Blaming Syrian regime is like the pot calling the kettle black. While Syria has no record of using chemicals or other prohibited weapons, the US track record on this account is dismal. While there is little doubt that Sarin nerve gas was used at Ghouta, what is the proof that Syrian troops and not the rebels have used it? The US has no evidence to support its contention and is giving no importance to UN inspectors. There are strong suspicions that chemical weapons were provided to the rebels by their western backers or Israel in the wake of Syrian forces gaining an upper edge over the utterly demoralized rebels.

It is surprising that Assad is unacceptable to the US and a hotchpotch future government of rebels comprising local Sunni Syrians, al-Qaeda elements and Salafis will be acceptable. Military intervention against a sovereign state and that too without UNSC approval, whether limited in scale or full scale, is illegal and condemnable. Military action will further fuel civil war and there is likelihood that it may lead to wider conflagration with dangerous repercussions for the region which is already in a flux. Any glimmer of hope for ending the conflict peacefully will die down.

Libya stood alone to face the wrath of NATO, but Syria is not alone. Russia and Iran have high stakes in Syria and both have cautioned the US that they too have options to exercise. If Israel is important for USA, so is Syria for Russia since it is its oldest and sole reliable ally in Middle East. Apart from oil interest, Russia cannot afford to lose its strategically important deep-sea port facility in Tartars in Mediterranean Sea. Loss of Assad will be a strategic blow to Iran and will make it vulnerable. Hezbollah in Lebanon is a close ally of Syria and will not sit idle. Syrian conflict has sharpened Shia-Sunni divide, which by itself has serious ramifications for the Muslim world.

The writer is a retired Brig, defence analyst, researcher and columnist and author of books. asifharoonraja@gmail.com