9/11:Never Have So Few Been Able to Frighten So Many 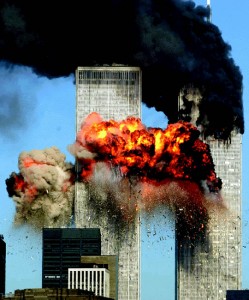 The war on terror, therefore, is likely to be with us for a very long time. Not only is there as yet no light at the end of the tunnel, but it might have no end at all.
Since the public remains terrorized, it seems likely to continue uncritically to support extravagant counterterrorism expenditures, including incessant security checks, civil-liberties intrusions, expanded police powers, harassment at airports, and militarized forays overseas if they can convincingly be associated with the quest to stamp out terrorism.

The war in Iraq and economic woes pushed terrorism down on the list of immediate concerns, and some of the most intense anxieties did decline in the few weeks after the 9/11 attacks. However, people clearly continue to deem it an ominous threat, and the absence of further substantial decline in subsequent years, and now decades, is striking.

In November 2001, about 35 percent of the public were very or somewhat worried that they or a family member would become a victim of terrorism. A decade later, 34 percent profess the same fear. And 75 percent consider another major attack in the near future to be very or somewhat likely, about the same as in early 2002.

The percentage holding that the terrorists are as capable as ever of launching another major attack is the same now as it was in 2002. Nor has there been much change since that time in the number who are willing to trade civil liberties for security or have confidence in the government’s ability to prevent or to protect them from further terrorism.

These results suggest that the impact of 9/11 has been internalized. But people are not simply giving unthinking, routinized responses — ones they deem to be socially required. Over time, the numbers on many questions have fluctuated in reaction to events such as the capture of Saddam Hussein and the terrorist bombings in London in 2005. The percentage who think the United States is winning the war on terrorism has bounced around quite a bit, but it currently stands at almost exactly the same level as in October 2001 — even though people obviously want to believe we are doing progressively better.

Nor are poll respondents simply responding to alarmist hype coming out of Washington.

There was a great deal of that during the George W. Bush administration — particularly around the time of the 2004 election, when Attorney General John Ashcroft, with the FBI director standing beside him, proclaimed that al-Qaeda was “almost ready” to attack the country in the “next few months.” Such posturing declined in later years and has been heard very little under the Obama administration, yet anxieties have not waned.

The continued persistence of terrorism anxiety is not easy to explain. It is possible that the initial trauma of 9/11 was importantly reinforced by the (unrelated) anthrax attacks that followed shortly after — fears about being harmed by terrorists began to decline in the days after 9/11 and then were pushed to their highest levels ever when the anthrax story came out. There is also special anxiety in the fact that the 9/11 terrorists were out specifically to kill civilians and to do so more or less at random.

The seemingly constant stream of small-time terrorism cases since 9/11 may have kept the pot boiling even without much lasting media interest. The stress on what these failed (and mostly boneheaded) plotters hoped to do, not on what they were likely to be able to do, may also have contributed. So may the popular, if rather bizarre, extrapolation that, because the 9/11 terrorists were successful with box-cutters, they might soon be able to use weapons of mass destruction.

Anthropologist Scott Atran has observed of 9/11 that “perhaps never in the history of human conflict have so few people with so few actual means and capabilities frightened so many.” Much of that fright, it appears, has proven to be perpetual.(John Mueller)