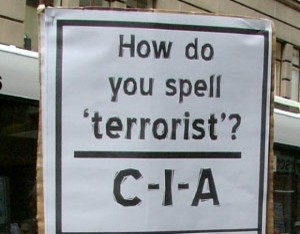 Wayne Madsen has the spine to expose CIA links with the terrorist groups in his article captioned ‘The CIA’s Islamist Terrorist Network’ published in Strategic-Culture Organization’s online journal.
He stated: “The Central Intelligence Agency cobbled together the forerunner of the present Muslim jihadist terrorist network in the late 1970s to battle Soviet troops in Afghanistan…The Haqqanis are the latest in a long line of so-called terrorist groups that were organized and funded by the CIA only later to be thrown to the side of the road and branded terrorists. Others include Al Qaeda, led by CIA Afghan war veteran Osama bin Laden (killed in an attack by Navy Seals on 2nd May 2011) and Hizb-e-Islami leader Gulbuddin Hekmatayar”. Madsen has given quite a few references in support of his findings and contention. He quoted John Cooley’s book ‘Unholy Wars: Afghanistan, America and International Terrorism’, which revealed the nature of the CIA’s involvement with Afghan opium smuggling.
The author also quoted the late British Foreign Secretary Robin Cook, who in an article for The Guardian newspaper published on July 8, 2005, wrote “Throughout the 80s Bin Laden was armed by the CIA and funded by the Saudis to wage jihad against the Russian occupation of Afghanistan”. In 2010, Madsen reported that unnamed sources suggested that the company formerly known as Blackwater had been conducting false-flag operations in Pakistan that were blamed on the Tehrik-i-Taliban Pakistan. But there have been scores of books and host of articles written on CIA’s exploits. Website 911Review.com had carried an article captioned ‘History of American false flag operations’ producing a detailed account dating back to American War of Independence and then from Mexican and Spanish wars. First and Second World War, Korean War, Vietnam War, Grenada invasion, Panama invasion, US-Israeli sponsored war between Iraq and Iran, Desert Storm 1991, and then War on Terror in October 2001 (Afghanistan invasion), Enduring Justice 20th March 2003, later known as Operation Iraqi Freedom.
However, it would be appropriate to discuss as to why the US needed an organization like the CIA. Aftermath of the Second World War saw the devastation of Europe and the emergence of the USSR and other socialist countries on one hand, and the rise of the U.S. as the superpower on the other. The balance of power had changed. Colonialism and imperialist powers realized that it was no longer possible for them to rule the colonies directly as they had done before. The retreating colonial powers created divisions and break-up of colonies at the time of their independence and manipulated certain territorial and border disputes to remain unresolved, which could enable them to keep the neighbouring countries in a state of war. Old Arab states were crushed and new ones were created. Israel was created in place of Palestine. The Congo was divided into Brazzaville and Leopoldville. Vietnam and Korea were both divided into North and South. China was divided into People’s Republic of China and Taiwan and Hong Kong. Thus an organization like the CIA was needed to advance imperialist agenda.
David Wise wrote in his famous book ‘The American Police State: The government against the people’, which was published in 1976. On page 223 he writes: “The CIA helped to overthrow the government of Iran in 1953 and Guatemala in 1954; it secretly trained Tibetans in Colorado in the late fifties to infiltrate their homeland and fight the Chinese Communists. It supported the rebels fighting Sukarno in 1958. It invaded Cuba at the Bay of Pigs in 1961. It poured millions of dollars into Italy and other Western European countries to support moderate political parties. And it encouraged the military coups in Vietnam and Chile in which the leaders of those countries were killed”. There is incontrovertible evidence that the CIA hatched conspiracies for assassination of Petrice Lumumba. Thanks to the CIA, the US had played its role in stoking Arab-Israel conflict and Iran-Iraq war, and supported the contra saboteurs against the revolutionary government of Nicaragua. The list of its interferences, subversions, controls and overthrowing of Third World governments was too long to be elaborated.
During 1960s, the CIA was involved in covert operations in Tibet, Guatemala, Cuba, Democratic Republic of Congo, Iraq, Brazil and Ghana, etc. During 1970s, President Allende of Chile was removed through military coup, whose only crime was that he had nationalized copper industry. During this period, the CIA also conducted covert operations in Iraq and Argentina. During 1980s, Nicaragua, El Salvador, Cambodia, Angola, Phillipines and Iraq, in 1990s once again Iraq, in 2002 Venezuela, and in 2004 Haiti were the areas where the CIA left its marks. According to various reports, the CIA has had dealings with the groups involved in drug trafficking on the pretext of getting useful information and seeking their support. CIA and Kuomintang (KMT) were reportedly involved in opium smuggling operations. On 13th April 1989, Kerry Committee report on Iran Contra affair concluded ‘Contra drug links included payments of more than $800000 to drug traffickers by the US State Department to Iran contra.
In 2003, Alfred W. McCoy wrote the book ‘The Politics of Heroin: CIA Complicity in the Global Drug Trade, Afghanistan, Southeast Asia, Central America’, which is historical study of the opium and heroin trade and its political context, based on primary and secondary sources, including interviews with some of the key players of the developments in Indochina in the 1950s through 1970s. The title of the book is self-explanatory and does not warrant a comment. There are stories of cocaine trafficking in Central America during Reagan administration as a part of contra war in Nicaragua, and drug trafficking in Mexico, Venezuela and Panama. Even today, the CIA supports various Afghan drug lords. The U.S. also invaded and occupied Iraq obviously to control the oil resources, as all other pretexts were proven wrong. Despite setbacks in Afghanistan and Iraq, the US does not appear to have learnt any lesson, and continues with its policy of imposing its version of democracy on developing countries and the Middle East.