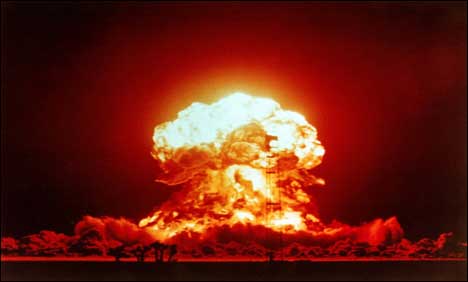 Thursday, December 20, 2012 – The Indian policy makers finally, on 11 May 1998, lifted the veil from the true face of the Buddha which had apparently smiled “peacefully” on 18 may 1974 in Pokhran. Pakistan was quick to display its tit for tat reaction a few days later.

Although the 1998 testing did give India the status of defecto Nuclear weapon status, yet it also neutralized Indian conventional edge over Pakistan as prospects of any future conflict between these South Asian rivals could not be conceived without bringing the nuclear equation into the calculus. Subsequently, Indians hurriedly came up with a draft nuclear doctrine which provides fuzzy guidelines for the employment of nuclear weapons. Pakistan, to add further credibility to its nuclear deterrent, decided to keep its nuclear doctrine a classified matter.

While Pakistan has never kept it hidden that its nuclear deterrent is premised on the core belief of “first use but last resort”, this term has usually been seen by the western academics as an offensive nuclear posture. Other than Pakistan, only Israel shares same kind of doctrinal principle labelling it as a “Samson Option”, but it has never been subjected to the same kind of scrutiny in the western media or academics, as has been seen in the case of Pakistan.

According to a report published by International Commission on Nuclear Non-proliferation and Disarmament, no other nuclear weapon state, dejure or defecto, gives an unequivocal and unconditional negative security assurance except for China. Ironically, while Pakistan is singled out for adopting a posture of “first use but last resort” which actually means that it could consider the employment of nuclear weapons once all other options have been exhausted, India is given a salutary status to its actually meaningless clause of “no first use.” Interestingly, not only in the west but some of the Pakistani scholars amongst the strategic community have fallen victim to this deceptive phrase in the Indian nuclear doctrine. The Indian so called “no first use” clause has three conditions attached to it which actually makes it redundant.

Saudi Arabia, Turkey and even Iran can be considered as allies of Pakistan with regards to certain issues. Likewise, Japan, Germany, Italy and South Korea also forms and alliance with the US and thus qualifies for a nuclear first strike. Finally, clause 2.3a, revised in 2003 states that, “however, in the event of a major attack against India, or Indian forces anywhere, by biological or chemical weapons, India will retain the option of retaliating with nuclear weapons.” This implies that if some UN contingent including few Indian troops is attacked with either a chemical or a biological agent in some of the remotest part of the world, India could retaliate with nuclear weapons. Under such conditions, actually believing in the myth of Indian no first nuclear posture and doctrine is a self-alluded fallacy which practically makes no sense at all. Rather, it is primarily meant to maintain ambiguity with regards to first strike option if a situation is deemed necessary.

This is not to criticize the Indian nuclear doctrine for its first use clause because all states, except China, have such provisions, rather the purpose is to understand the doctrine in right perspective and avoid singling out some states at the same time comforting other with the same nuclear posture.(Shams uz Zaman)