PAF-JF-17 THUNDER ROARS IN THE SKIES OF ZHUHAI CHINA 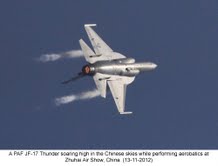 Islamabad: 13 November, 2012.  Zhuhai International Air Show in China was inaugurated with an impressive inauguration ceremony today. The Air Show is being participated / attended by professionals & representatives of Aviation Industry from China as well as professionals from all over the world. For participation in the Air Show, three ‘JF-17 Thunder’ aircraft of Pakistan Air Force were flown to Zhuhai on last Friday.   The impressive JF-17 (Thunder) jointly co-developed (by PAF & CATIC), and co-produced by PAC (Pakistan Aeronautical Complex) and CATIC (China Aero-technology Import Export Corporation) put up static as well as impressive aerial display at the Air Show.  During aerobatics, the JF-17 displayed its high agility and manoeuvrability which was also visible in the form of ‘white condensed air streaks’ generated from wing roots of the aircraft. During Air Show, aviation professionals and military delegates from all over the world appreciated high performance of the aircraft.   At static display, military professionals displayed keen interest in JF-17s large inventory of weapons comprising general purpose & precision guided bombs, air-to-air Infra Red & Beyond Visual Range missiles, as well as air-to-surface & anti-ship missiles and Electronic Warfare pods. The JF-17 on static display was visited by Air Chiefs and delegates from many countries, who appreciated the man-machine interface and combat potential of the aircraft.

The JF-17 made its debut at Farnborough Air Show in 2010, when two  JF-17s flew all the way from Pakistan to Farnborough, UK. Four months later in Nov’10, three JF-17s flew over to China to participate in Zhuhai Air Show, where the aircraft made its first ever aerobatics display. In Jun’ 11, three JF-17s participated in aerobatics and static display in 100-years Celebrations of Turkish Air Force and subsequently, 03 JF-17s also participated in Dubai Air Show in Oct’ 11. At all Air Shows, the JF-17 attracted intense focus of visitors and international media.   The JF-17 Thunder is an all weather, multi-role, light combat aircraft that has the potential to be the main stay & work horse of any Air Force.  The design of     JF-17 aircraft is based on modern concepts of aerodynamics.  The aircraft is equipped with a digital fly-by-wire flight control system that gives it the agility in all regimes of the operational flight envelope.  The JF-17 has a complete glass cockpit, excellent man-machine interface and modern self–protection suite, which enhance combat potential and survivability of the aircraft.

The JF-17 is equipped with fourth generation avionics systems, wide range of conventional & smart weapons, long range glide bombs, Beyond Visual Range & short range Air-to-Air missiles, Anti-Ship missile and Air-to-Surface missiles.  The aircraft requires remarkably short lengths of runway for take-off & landing, which offers flexibility of aircraft operations at short air strips.  Shortly, the aircraft will also have Air-to-Air refuelling capability, which will further enhance its combat potential and employment options.  Pakistan Air Force has inducted JF-17 in its fleet which since Year-2009 are rolling out from Pakistan Aeronautical Complex (PAC) Kamra.   The JF-17 Programme has been a success story since its inception in 1998.   Developmental work on the aircraft commenced in the year-1999 and detailed design was finalized in September, 2001.  After flight testing, a Small Batch of 08 aircraft was produced in year-2007 and finally serial production of the aircraft started in Pakistan in the Year-2009.  So far PAF’s two Squadrons have been equipped with JF-17s, while the third is planned to be raised by beginning next year.   At present, JF-17 aircraft stands prominent in its own class of fighters.  In the present environment, when defence budgets are shrinking and Air Forces face difficulties in affording modern combat aircraft, JF-17 offers a highly cost effective solution with cutting edge capabilities.  In the shape of JF-17 aircraft, Pakistan Aeronautical Complex and CATIC offer a cost-effective, highly potent, multi-role combat aircraft which is capable of meeting the challenges of present and future Air Power employment.