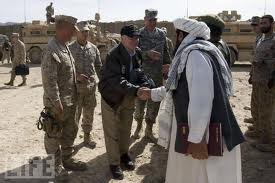 Monday, December 31, 2012 – Mark Weisbrot, a US economist, columnist and co-director of the ‘Centre for Economic and Policy Research’ in Washington D.C. advised United States that, “We need to end this war in Afghanistan and the other operations that are making Americans less secure and recruiting new enemies daily. Then we can focus on fixing our broken economy at home.” Under the contemporary environment, this is most honest advice; a scholar could give to the authorities of his motherland. Indeed, President Obama won his first election in 2008, based on the promise that, he would reform the US economy, provide job opportunities to its nationals and reduce the overseas military engagements especially; Iraq and Afghanistan. He had a similar agenda for his re-election in 2012.

Indeed, to-day US is fighting a war in Afghanistan with a very little domestic support. It is not a popular war. According to US survey, over 60% Americans desire that US should immediately end Afghan war. This was not a scenario even in the worst phase of US war in Vietnam, where despite opposition; there had been acceptance among Americans to bring that war into a logical conclusion. In Afghanistan, US masses would not like to wait for a logical conclusion. Besides US, many European countries (NATO allies) have already decided to pull out their troops from Afghanistan in the near future. So much so, British Prime Minister, David Cameron has announced on December 19, 2012, that, UK would pull out half of its 9000 combat troops from Afghanistan by the end of 2013. Indeed, the bottom line is that, “Western leaders have largely given up trying to explain or justify why Western troops are still in Afghanistan and why they are still killing and being killed.”

The Afghan combat has caused US with the death of over 2200 troops, besides wounding thousands. In Iraqi operations, US lost over 4,400 combatants. A common American question the Government, after all, why these Americans were killed and why trillions of dollars of US tax payer’s money was spent on these overseas military campaigns. The US has a realization that many in that country are passing through the psychological trauma because of this war. These include the returnees of Afghan and Iraqi wars. These people may promote extreme emotions in the US society. Indeed, there is already a spread of radicalism in the US society and these people may add fuel into that.

Under these compelling environments, United States has finally decided to negotiate with the Taliban leadership. Although, there have been many rounds of covert talks between US officials and Taliban during previous years, but, owing to disagreement on the basic themes, those talks were not successful. Now, there is realization among State Department that, for a face saving move out from Afghanistan, it is extremely essential that, the US should reach over to some sort of agreement with Taliban, the main warring group in Afghanistan.

French Government in Chantilly brokered the most recent round of talks, just outside capital Paris. The meeting was organized by French think tank, ‘the Foundation for Strategic Research.’ It was participated by Afghan political leaders among whom there were two representatives of the Taliban, Shahabuddin Delawar and Naeem Wardak. US officials closely monitored the meeting. A similar meeting was held in June 2012, in Kyoto, Japan, (brokered by Doshisha University Kyoto) between a senior Taliban Shura member Qari Din Mohammad, and former Afghan minister of planning, and Masoom Stanekzai, head of the Afghan High Peace Council. It was also encouraged by United States.

For the NATO and particularly United States, it is an excellent opportunity to negotiate with the Taliban, before drawdown. Indeed harmonization among various Afghan factions and groups is the need of hour. This has become extremely essential in the backdrop of a recent report, “Pentagon’s December-2012 Semi-Annual Report to Congress”. The report created a heated debate, whether Afghan National Security Forces (ANSF), totalling 350,000 so far, are capable to ensure Afghanistan’s security in the post 2014 environment. The report, while evaluating the capabilities of ANSF identified just one brigade of Afghan Army, which is fully capable to perform its function with combat readiness and without outside help.

The report if critically analysed have many aspects. Combat readiness of one ANSF brigade only is a clear indication that, ISAF has not done enough to train the ANSF in true letter and spirit. If one brigade is ready to fully take over the security responsibilities, why not others, at least those trained alongside this brigade with same duration, same kind of manpower, equipment and standard of training. There is yet another aspect that, perhaps US would like to continue stationing its troops in Afghanistan, post 2014, on the plea that, ANSF are not able to take over the security responsibilities there. In all the fairness, one thing is clear that, ANSF is not fully prepared to take over the responsibilities of Afghan security in the post 2014 environment; despite the fact that, currently they have been assigned these security responsibilities in most of the areas. The question arises; would they sustain the Taliban pressure without US and NATO support?

The solution then lies in the negotiations between all Afghan factions and groups. Pakistan has always supported the negotiations and reconciliation among the Afghan factions. It has always advised US to adopt a reconciliatory approach for a long lasting solution in its war ridden neighbouring country. Of course, the solution should be Afghan led and supported by all neighbours and US. Since Taliban is a major opposition group in Afghanistan, therefore, engaging them through negotiations would be extremely essential to evade a civil war like situation in Afghanistan in a future Afghan scenario. For the success of such talks, it is extremely essential that, US should give up its old strategy of talking with Taliban from the position of strength, as; it has neither won, nor winning in Afghanistan. It should encourage Afghan Government and all Afghan factions for bringing consensus Government for a stable and peaceful Afghanistan.(Dr Raja Muhammad Khan)