A Muslim need not break or burn 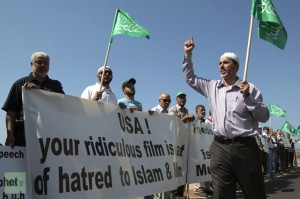 Angry Muslims are finding guidance from moderate preachers in the row over the US-made film against Islam, writes Gihan Shahine

“We must not get trapped,” warned popular Islamic preacher Amr Khaled on Facebook this week, his comments coming in reaction to the US-made anti-Islam film that has sparked massive protests around the world, leaving the US ambassador to Libya dead and the US flag burnt in front of the US embassy in Cairo.

“This film is aimed at provoking Muslims into angry reactions that could portray them as backward, barbaric and even as posing a danger to the West, in order to justify whatever plans there are to attack Muslims,” Khaled said.

Khaled was hosted on two talk shows on Al-Hayat and MBC satellite channels last Friday, where he commented on the film and provided guidance on how angry Muslims around the world should react in such a way as to give a positive image of Islam and help curb the recurrence of such offences to Islam and the Prophet Mohamed.

“This [film] is an insult directed at one-fifth of the inhabitants of the globe,” Khaled said. “It is also an offence to humanity as a whole, since the message of the Prophet Mohamed (PBUP) was the source of today’s Western civilisation, spearheaded in Andalusia [while under Islamic rule].”

Khaled joined forces with other moderate Islamic preachers who condemned all acts of violence against US embassies abroad. “This is not how the Prophet Mohamed himself reacted to insults by Quraishi atheists at the time of his preaching,” Khaled said.

He explained that the Prophet Mohamed had been insulted by the Quraishi tribesmen of the Arabian peninsula, and his prudent reaction was one reason why those same people had eventually converted to Islam.

“A Muslim need not break or burn because he has immense power in his hands — strong arguments based on truth that can easily defeat falsehood,” Khaled said. “Muslims should always be the ones to initiate positive actions rather than just react to such incidents.”

Khaled suggested certain steps that might be taken, urging wealthy Muslim businessmen in Egypt and the Gulf to finance a high-quality film, perhaps involving the world’s most renowned actors and directors, giving a true picture of the life of the Prophet Mohamed. He also called on the Arab League to push for legislation criminalising blasphemy.

“Legal experts and journalists should address the international community, demanding that it stand up in the face of insults against religion,” Khaled said. Young people should react positively by posting messages on Facebook and twitter expressing their feelings and telling the world who the Prophet Mohamed really was, he added.

“This is how we can react in a civil way that can bridge the gaps with others,” he said, explaining that seeing the West as the enemy would be a grave mistake. Khaled stressed that the majority of Egypt’s Copts condemned the film, adding that it only represented the views of its makers.

Khaled’s was not the only moderate Islamic voice addressing the crowds this week. Sheikh Youssef Al-Karadawi, president of the Union of World Muslim Scholars, similarly urged Muslims “to act with prudence and peace”.

“There are individuals with bad intentions who want to portray the Prophet Mohamed negatively,” Al-Karadawi told worshipers during last Friday’s sermon in the Qatari capital Doha. “Some of them may be American citizens, but they do not represent the United States. Some of them are Coptic Christians. The Copts should know that their safety depends on their being with their Egyptian brothers and sisters and not with the Americans or Europeans.”

For Al-Karadawi, discussing the life of the Prophet Mohamed with other peoples should be the way Muslims react to insults, and he stressed that attacks on embassies were unacceptable for religious reasons.

“There should be a reaction, but without resorting to violent acts,” Al-Karadawi maintained. “We need to react using the same methods our enemies use,” he added, saying that the government of Qatar had already shot a movie that focussed on the life of the Prophet Mohamed.

Al-Azhar in Cairo, the Sunni world’s most prestigious seat of learning, also delivered a similar message through official statements and at a conference held on Monday under the title “Positive Actions in Support of the Prophet Mohamed”.

Al-Azhar professor Mohamed Mokhtar Al-Mahdi insisted that violence contradicted the teachings of the Prophet Mohamed. He said that the film could never harm Islam. Besides, he said, previous offences against Islam had caused non-Muslims to seek out further knowledge about it, eventually even converting to Islam.

Muslim young people around the world have already responded positively to these calls for prudence and have posted a wave of comments on Facebook and twitter expressing their feelings and introducing Islam in a positive way. Some have uploaded material, including books and short films, in English about Islam and the Prophet Mohamed.

However, Islamic scholars still insist that the UN should draft an international convention criminalising insults against religion in order to avoid the recurrence of such events. There is also a consensus among Islamic scholars on the urgency of increasing awareness of Islam in the West.

The grand sheikh of Al-Azhar, Ahmed Al-Tayeb, released a statement on Saturday calling on UN Secretary-General Ban Ki-Moon to draft a resolution criminalising blasphemy against Islam and other world religions on the grounds that “such actions and words threaten world peace and international security.”

Al-Tayeb also demanded that all those involved in the production of the blasphemous film should be “penalised for committing these heinous acts of abuse against the Prophet Mohamed (PBUH).”

“Is not this irresponsible action, Mr Secretary-General, similar to the [anti-Semitic] prejudice you condemn all the time and [against] which verdicts have been issued against alleged perpetrators in many countries of the world, even great thinkers and intellectuals,” Al-Tayeb asked in his letter to Ban Ki-Moon.

Al-Tayeb also urged crowds in Egypt and across the world to keep calm. He condemned the attacks on innocent people and expressed sympathy for the victims of the recent violence.

“Sixty UN members representing Islamic states should walk out of the UN tomorrow if it does not issue international legislation against insulting Islam and its prophet,” said Islamic preacher Fadel Suleiman. Suleiman, who lived in the United States until 9/11, is the director of the Bridges Foundation, an international non-governmental organisation that aims to bring people of different religions and ethnic backgrounds together through inter-faith activities [www.youtube.com/bridgesfoundation].

“This is how true Muslims should react,” Suleiman said.

There is something of a consensus among Islamic scholars and preachers that freedom of expression cannot be used as a reason for the UN not to issue such a resolution. They argue that Muslims should not be treated as second-class citizens, and that a law against anti-Semitism is already enforced against anyone who makes hostile comments against Jews.

In the United States, the State Department is required to provide a country-by-country report on anti-Semitic acts and “harassment” together with the relevant government’s response.

“The UN apparently does not have the political will to issue a law criminalising anti-Islamic offences,” Suleiman told Al-Ahram Weekly, underlining the view that many in the Islamic world are not convinced that insulting religion can be an exercise of freedom of expression.

“We Muslims cherish freedom of expression, but that cannot be taken as a pretext to defame religion,” Khaled argued. He said that he had made this point during a visit to Denmark in 2006 in the aftermath of the Danish cartoons that ridiculed the Prophet Mohamed and sparked similar public outrage.

“The West felt that it had made a mistake at that time, but I ask where the political will is to stop the recurrence of such offences,” Khaled said. The world cannot live in harmony and peace unless religion is respected, he added.

“This is not about freedom of expression; this is about elections,” Suleiman said, commenting on US reluctance to take legal action against the filmmakers. While the US-based filmmakers are protected under the US constitution’s first amendment, Suleiman said that they could still be charged under laws that criminalise inciting hatred and racism.

“The film is all about hatred, not just against the Prophet Mohamed, but against the message of Islam as a whole,” Suleiman said. “However, the US does not have the political will to take action against it, as this could be used against Obama and his party in the upcoming elections.”

Many Islamist members of the Constituent Assembly tasked with writing Egypt’s new post-revolutionary constitution are pushing for a clause that would criminalise those who insult religion. This would mean that Copts living abroad who had been involved in the making of this anti-Islamic film could be prosecuted at home.

Legalities aside, Islamic preachers and scholars agree that educating the world about Islam is now urgent.

“Ignorance is the greatest enemy, and by this I mean lack of information,” Suleiman said, adding that the film was one of many incidents in which Islam and Muslims had been insulted, humiliated or portrayed as terrorists since the 9/11 attacks on New York and Washington.

“To stop the recurrence of such incidences, we should design a plan,” he said, explaining that he had already distributed 300,000 free DVDs of a three-part series entitled Islam in Brief, a documentary providing information on Islam in 30 different languages [www.youtube.com/islaminbrief].

The material had brought about many conversions to Islam, Suleiman said, including in Israel. His organisation has also produced another documentary, entitled Jihad on Terrorism, 120,000 copies of which have been distributed across the world.

He is working on a documentary entitled Islam and Women, which investigates the fact that 75 per cent of those converting to Islam, especially in the United Kingdom, are women, despite the Western view that Islam discriminates against women.

“The film is in need of financial support, however,” Suleiman said.