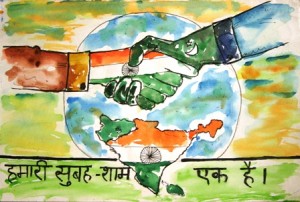 Though the relations between Pakistan and India began in disaster in 1947, Indian invasion and brute occupation of neighboring Jammu Kashmir and its threatening of Pakistan have further “cemented” the awkwardness of ties between two newly freed nations. Suffering from incurable superiority complex, India deliberately strained relations with almost on a permanent basis. The process was complicated by the superpowers USA and Russia.

Haunted by big global ambitions, India is still reluctant to quit Jammu Kashmir even after it has already slaughtered over 100, 000 innocent Kashmiri Muslims and has sought the big powers for patronage of its crimes against humanity.

By utilizing the destabilized nature of Pakistan, threatened by the NATO rouges led by USA-UK terror twins, India as a newly wedded strategic partner of America has made some progress in coercing Pakistani leaders to listen to Indian “advises” and become pro-India.

India asks the puppet Pakistani regime to just ignore the Kashmir issue and cultivate cross border trade with India. It reasons that not many Kashmiris really want freedom and so Pakistan can keep Azad Kashmir and not to worry about India occupied Jammu Kashmir. That is the mutually profitable proposition of India. Expecting a change of mind in Islamabad, India has altered its tactics; the tone of threats and insults, so used to by Indian voices, has of late been confusing to many Indian strategist themselves and not conciliatory in any format.

India wants Pakistan, now a member of the notorious UNSC, to promote Indian agenda globally. Quite, likely there must be hidden talks on payments for Pakistani services to India. After all, Americans do claim they pay service charges to Pakistani leaders for their assistance in NATO terror attacks on Pakistanis.

India, for the first time since 1947, admitted, with a little hesitation that the rhetoric and all allegations made against the State of Pakistan for years now to gain bogus sympathy from the west, have not been corroborated by subsequent evidence. It was because of this that terror Indian PM Manmohan Singh did not raise this issue, as he was originally expected to, in his talks with destabilized Pakistan President Asif Ali Zardari of in the margins of the recent NAM summit in Tehran, Iran.

India systematically promotes hatred for Pakistan. It has been a practice in India to use abusive language against Pakistan, accuse Islamabad blindly when something goes wrong in India, only to appease fanatic Hindus. And the waiting media of India make prominent headlines against Pakistan.

The select members of elites of both India and Pakistan keep visiting each other nation on a regular basis, ostensibly to promote good will, but India has reduced even a bit the tempo of false rhetoric against Pakistan.

By maintaining the “terrorism” issue intact as coercive tool, India searches for new areas of convergence minus Kashmir issue. It seems there is an “improvement” in bilateral trade and easier visa procedures.

Since they occupy parts of Jammu Kashmir, both India and Pakistan now jointly direct the Kashmiri media to promote their joint interests and not to seek re-independence from them.

Obviously, India, is very eager to conduct joint military exercises as a global trend and as a part of strengthening cross border trade. Americans want to steal the Pakistani nukes by overusing drone terror techniques. Neither Pakistanis nor Kashmiris would gain anything from all these dirty politics of terror exhibition.

Can’t India and Pakistan develop relations after freeing both Jammu Kashmir and Azad Kashmir for good? Why cant India think of a positive policy at least no, in stead of such bogus gimmicks!

Explosive nature of Kashmir is not seriously approached by the international community which operates for their own individual and collective profits, forgetting about peace in any part of the globe.