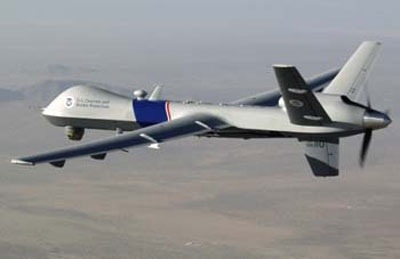 Speakers and participants of a seminar were unanimous in an interaction with a delegation of US anti-war activists visiting Pakistan at the Institute of Policy Studies, Islamabad that US drone strikes in Pakistan were a clear violation of international laws, human rights and depict an absence of conscience among the strategy leaders in both US and Pakistan.

Senior member of the delegation and former US army colonel and diplomat, Mary Ann Wright termed drones as the “personal execution device” of the US president and told that he was directly responsible for the US drone operations in any part of the world, which were sanctioned by him every week. She said that through drone strikes US was violating international laws, even US constitution and laws itself, and all the concepts of conduct of war formed in the wake of the Second World War.

“Unfortunately, our president has chosen the role of chief executioner in United States”, she deplored.

Urging a greater coalition of peace activists at the global level against drones and the so-called war on terror, Wright said that there still were people in the US military who abhor the US policies and strategies and a public movement would give such persons courage to speak up.
Head of the US peace delegation Medea Benjamin said that their group aimed at making all possible efforts to stopping US Government from illegal use of force. People in the United States and across the globe have to be told that the policy and the steps undertaken by the US and NATO were “barbarous, unjust and counter-productive”. She said that they were considering hunger strike in front of US embassy in Pakistan to bring the atrocities to the limelight.

Seminar participants observed that once it has become clear that the political and military establishments in Pakistan and United States were “barren of conscience” with respect to the loss of lives and civil liberties in FATA, the people will have to stand up to express their concerns in every legitimately possible way to force the authorities to act sane.

It was highlighted that while the movements for peace in United States have been vocal and bold, it is high time that the people of Pakistan too should raise their voices too. The people in tribal areas were left at the mercy of militaries who knew nothing but to bombard. Tribal people do not and did not have any say in whatever has happened or was happening to them, through them or in the name of them.

Concluding the session senior IPS associate and former secretary foreign affairs Akram Zaki said that the mission and objective of peace activities should definitely focus drones but in a wider canvas should aim at elimination of the war in Afghanistan. He noted that central vision of US offensive policy, as clearly manifested in drone strikes strategy, was to kill others without risking the lives of their own soldiers.

Zaki said was of the view that freedom of media in the US was a myth just like the introduction of democracy in the Third World. He said that the national security doctrine in the US did not allow media to report freely on the US atrocities in the so-called war on terror and its drone operations that have killed and maimed thousands of innocent people.

He said that the Bush era in the US was an era of international illegalities. He also deplored that when drone operations were initiated in Pakistan it was in connivance with the then government and unfortunately the present democratic government was also towing the same line.