Fall of Dhaka Day: Watch out 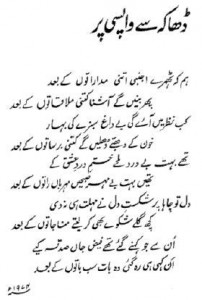 Ever since the Fall of Dhaka, a great tragedy of our times, there has, on one side, always been “ehsas-e-ziyan jata raha”-attitude on part of our governments, civil society, intelligentsia and media, and on the other side of the border, the enemy celebrates the ‘big’ victory with heightened vigour and renewed pledge to pose further dent to the remaining part of the then ‘united’ Pakistan. While, this time too, no plans have been seen made on part of the government, or by the mushroomed TV channels, including the PTV, India and Bangladesh, their media agents in the US and other countries, have seemingly made elaborate programmes to further humiliate Pakistan. The refusal by Bangladesh’s Prime Minister, Hasina Wajid, to attend the recently held D-8 Conference in Islamabad, actually alerted the few who are relatively more concerned and sensitive than others to that horrible occurrence on Dec 16, 1971. However, the Bangladesh government did send a high-level delegation to Islamabad and did attend the D-8 Summit, but, on the side lines, the Oxford University Press coincided this event with the launching of late Sheikh Mujibur Rehman’s “Unfinished Memoirs”. This must be noted as to why this book was launched from Islamabad, that too close to December 16, and why a number of prominent figures, journalists amongst them, who not only attending the book launching and delivered pro-Bangladesh speeches, but also are invited to attend the “Bangladesh Independence Honour” award-giving ceremony scheduled to be held on Dec 15-16 in Dhaka. Reportedly some 15 figures from Pakistan and 150 from other countries are reaching Dhaka as many of them, including three Pakistanis, would receive this rare award of honor, for playing their role in the ‘independence’ of Bangladesh.

But what is more flabbergasting is the startling disclosure that one of the MPs from Balochistan has reportedly been distributing hundreds of copies of the book “Dead Reckoning” written by Dr Sarmila Bose, the daughter of renowned Partition-Politician Chandra Bose. Ironically, a major portion of this book goes in favour of Pakistan Army, and therefore the army bigwigs have recommended it for everyone to read as it helps bring back some of the lost pride of the Pakistani soldiers and officers, almost exonerates them from rape and massacre charges; but the book very vividly highlights the causes of divide, sense of deprivation, the attitude of the dominant Punjabi elite, etcetera, which the Balochistan MP may find similar to the current scenario. Besides, there are reportedly more propaganda plans in the pipeline, for which the funding has allegedly been injected from abroad, in order to make this event sending this nation into further defeatist mindset. In addition to this humiliation, Hollywood is poised to release a movie “Zero Dark Thirty” around this day, the Dec 16, which may inflict further blows to already negative impact of the May 2 “get-OBL” operation in Abbottabad.

My advice to the authorities, to our establishment and particularly the nation, is “please watch out”. This all needs to be countered, but countered in a manner that your response should not become part of their plan to further spread the message of hate. This all may add salt to our wounds. Blame game is not the answer. Recognizing Dr Bose’ book as our side of view too, is tantamount to recognizing other charges against the West Pakistan and Pakistan Army as right, which demand a thorough insight and probe. Lest it may legitimize their secession movement. An agitated answer to such propaganda may make the Bangladesh people as a party, which may affect the policy of winning hearts and minds. Silence, too, is not the answer. Our response must lie in positive sense of remorse that urges you to strive tirelessly to regain the lost pride and glory of us. We need correction and rectifications. Let this not be taken as a precedent for another campaign in Balochistan or elsewhere. Our attitudes, I tell you, have not been changed. The ridicule in sms-jokes against the ethnic communities within Pakistan is one such example. Such a ridicule, or discrimination, exists in our actions, dealings and while addressing their grievances.