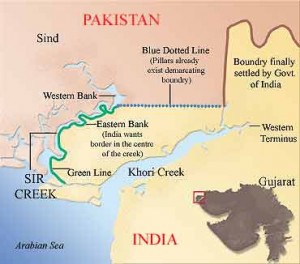 Renowned Pakistani and Indian media anchors including retired high civil and military officials gathered on December 2, 2012 in New Delhi at a seminar to discuss practical solutions to the bilateral issues like Sir Creek, Siachen, Kashmir dispute etc. under the Aman Ki Asha initiative organised by The Times of India and Pakistan’s Jang Group. The move was part of the Confidence Building Measures (CBMs) between both the neighbouring countries to narrow down their differences.

At the same time, India decided to erect a ‘floating fence’, anchored by submerged metallic meshes, along the disputed Sir Creek border area with Pakistan. According to Indian media reports, top sources disclosed that the two agencies would be the National Buildings Construction Cooperation (NBCC) which will erect the fence of 75 km of the Creek, while the Central Public Works Department (CPWD) has already started work in rest of the area. The fence is reported to be a ‘gabion box’, which has all-weather concertina wires and poles. It is a regular technology used for flood water control and prevention of rock breaking along coasts by the impact of the saline ocean water.

While showing contradictory statements of New Delhi, an Indian official stated, “Sir Creek area is characteristic with shallow and slushy water and these boxes would be the best material to be sunk under water considering the difficulty of the terrain.”  On the other side, some Indian officials pointed out that the Sir Creek area including a particular stretch called ‘harami nala’ is vulnerable to infiltration and smuggling by Pakistan, adding, “A number of instances of the Border Security Force apprehending Pakistani fishermen and trawlers are reported from the Sir Creek area regularly…hence the border guarding force has raised and deployed a special unit called ‘crocodile’ commandos in the marshy territory.”

However, under this ambivalent strategy, any such attempt made by India would lead to misunderstandings between Islamabad and New Delhi because Pakistan’s position is that the Sir Creek is sovereign part of its territory.

Sir Creek which opens into the Arabian Sea, and sits in the Rann of Kutch marshlands is the 96 km narrow piece of water between India’s Gujarat state and Pakistan’s Sindh province. The major dispute between India and Pakistan over Sir Creek is about understanding of the maritime boundary between Kutch and Sindh.

Although India and Pakistan had surveyed the 100-km Sir Creek estuary in 2007, yet Indian delaying tactics frustrated Islamabad’s attempts to demarcate the maritime boundary between the two countries. This has resulted into the detention of hundreds of Pakistani fishermen, who unintentionally strayed across the poorly-demarcated territorial waters. India illegitimately claims that the Creek boundary which opens up to the Arabian Sea should be in the middle of the estuary, while Islamabad legitimately argues, it should lie on the southeast bank.

Since 1969, many rounds of talks between India and Pakistn were conducted on Sir Creek issue, relating various steps such as allocation, demarcation and administration. But no breakthrough occurred due to Indian tough stand. India has proposed that the maritime boundary could be demarcated first, as per the provisions of Technical Aspects of Law of Sea (TALOS). However, Pakistan has staunchly refused the proposal on the grounds that the dispute should be resolved first. Islamabad has also proposed for international arbitration, which New Delhi has flatly refused.

We cannot see Indian delaying tactics regarding the solution of Sir Creek dispute in isolation because it has always remained part of other related issues between India and Pakistan. In this regard, India suspended the ‘composite dialogue’ in 2008 under the pretext of Mumbai terror attacks which were in fact, arranged by its secret agency RAW in connivance with Indian home-grown terrorists.

India and Pakistan resumed the new phase of parleys in March, 2009. But every time, prime ministers and foreign ministers of both the countries have ended their meetings with issuance of positive notes, and vowed for the solution of all issues, but the same failed without producing tangible results.

Nevertheless, on April 8, Pakistan’s President Asif Ali Zardari and Prime Minister Manmohan Singh who met in New Delhi also remarked that the two countries “are willing to find pragmatic solutions” to various issues like terrorism, Kashmir, Siachen, Sir Creek, Wullar Barrage, water etc. In the recent past, both the leaders also met in Tehran and agreed to settle all the outstanding disputes between Pakistan and India.

Meanwhile, while addressing rallies in Kutch and North Gujarat, Chief Minister of Gujrat Narendra sharpened his attack on Prime Minister Singh on December 13, alleging that he had agreed with Pakistan’s president to resolve the issue of Sir Creek which would be given to Pakistan, but, Prime Minister’s Office termed these allegations as baseless.

In fact, India is emphasising more on CBMs than to pay attention for the settlement of real issues which also include Sir Creek and particularly thorny dispute of Kashmir. It is only interested in promotion of trade, friendly exchanges, tourism, relaxation of visas etc. Implementation of these agreements has started. In this context, Islamabad also signed a number of trade agreemens with New Delhi, which allowed India exports of mutltiple items across the Wagah border. It also granted India Most Favoured Nation status, which permits trade in almost everything.

It is notable that a meeting in relation to military to military CBMs held in Lahore from 23-25 September 2012 in which top retired officials of Indian and Pakistani armed forces participated. They gave positive suggestions for the settlement of all issues between both the countries including Sir Creek dispute.

Besides, at conference in Islamabad, organised by the Institute of Regional Studies (IRS) with India Pakistan Soldiers Initiative for Peace (IPSIP), former vice chief of the Indian Army, Lt. Gen. Moti Dhar, remarked on November 22, “While the Kashmir issue is very complicated, I am confident that the other three issues: Siachen, Sir Creek and water issues will be resolved soon.”

But all these CBMs and agreements cannot succeed in future owing to Indian duplicity and shrewd diplomacy. Notably, on November 10, 2011, the then Prime Minister Yousuf Raza Gilani and Prime Minister Manmohan Singh agreed in Maldives to improve their bilateral relations by resolving all issues. Quite contrarily, two days after that meeting, Singh stated, “I left Gilani in no doubt that if public opinion in India is not satisfied that justice is being done to those responsible to the barbarous attack of Mumbai, it would not be possible to move forward with the peace process.” On the other side, Pakistan’s Interior Minister Rehman Malik said about Pakistan’s position that Ajmal Kasab, the lone survivor of the 26/11 terror-incident is a “non-state actor…should be hanged, so should perpetrators of the Samjhauta Express blast.”

During his visit to Islamabad, India’s External Affairs Minister S M Krishna in September, 2012, also showed great optimism regarding the solution of all major issues with Pakistan. But like Singh, quite contrarily, he warned that in case of Mumbai-like incident; relations between the two countries could lapse.

Notably, Indian adamant stand during Pak-India dialogue is not without some sinister designs. It has only been employing delaying tactics to settle any real issues with Pakistan. Therefore, New Delhi has rejected a number of positive suggestions of Islamabad about the solution various disputes like Kashmir, Wullar Barrage, water, demilitarisation of Siachen Glacier and demarcation of Sir Creek. It is only fulfilling formality through the new phase of talks, especially by showing to the US-led international community that it seeks to resolve all issues with Islamabad.

In this context, keeping in mind anti-Pakistan designs, Indian rulers have always tried to make the longstanding issues, intricate and complex, as they wanted to discuss only selective issues” like trade and CMBs.

At this juncture, while both the countries have accelerated confidence-building measures in accordance with the wishes of New Delhi, Indian decision to erect a ‘floating fence’, along the disputed border of Sir Creek as part of its double game will further complicate this issue.